High-Yield Market To Come Down To Earth

The high-yield bond market had its best year ever in 2009, with an overall return of 55% that beat most other major asset classes. However, analysts expect the market to return to a more normal performance in 2010.

Last year’s record returns are not repeatable going forward under most plausible scenarios, according to a BofA Merrill Lynch Research report. “We expect investors in this area to realize their promised coupon, with some price appreciation from spread tightening,” the report says. “Credit losses of historical average proportions are going to claim some of those price gains back,” it adds.

Spreads versus US treasury securities are expected to tighten to 550 basis points from their current level of 700 basis points, according to the report by Jeffrey Rosenberg, head of global credit strategy research, and Oleg Melentyev, credit strategist. The spread tightening will offset an expected rise in treasury yields, resulting in about a 10% total return, it says.

Issuers are expected to focus on extending the maturity of their debt and refinancing loans into bonds, just as they did in 2009. With the primary equity market reopening, however, more companies are expected to raise equity financing to help repay their debt and deleverage their balance sheets. This should provide a favorable fundamental backdrop for the high-yield bond market in 2010, according to BofA Merrill Lynch.

There could be a second but lower peak in the default rate by 2012, it says, as the Federal Reserve begins to withdraw excess liquidity, which could coincide with concentrated loan maturities. The ability to refinance and deleverage in 2010 will determine the size of any second default peak, it adds.

Outperforming other markets in 2010 will be very difficult for high-yield bonds without dipping into the lowest-rated issues, according to Barclays Capital. “Many of the highest-yielding credits are overleveraged companies with unsustainable balance sheets,” it says. They could provide high returns, however, as long as default rates do not deteriorate.

The US high-yield market remained active in December 2009, with total issuance of $15.7 billion, up slightly from $15.3 billion in the preceding month, according to Montpelier, Vermont-based KDP Investment Advisors.

The largest issue in December was a two-part offering totaling $2.5 billion by Clear Channel Worldwide Holdings, a subsidiary of San Antonio, Texas-based Clear Channel Outdoor Holdings. The issuer plans to lend the proceeds to its parent, which will use a portion to repay a $2 billion debt owed to Clear Channel Communications, a global media conglomerate.

Houston-based oil-field pipe distributor McJunkin Red Man raised $975 million in senior secured notes to pay off debt. The notes, with a 9.5% interest rate, come due in 2016. They were sold through Goldman Sachs and Barclays Capital, with J.P. Morgan and Bank of America Merrill Lynch as joint lead managers. 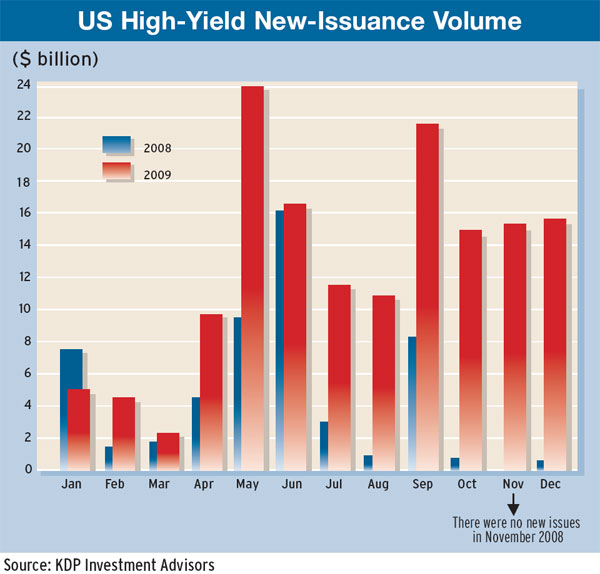