While much has been said about the hoards of cash that companies are holding on their balance sheets, companies are likely to use a blend of financing options, according to some market participants. 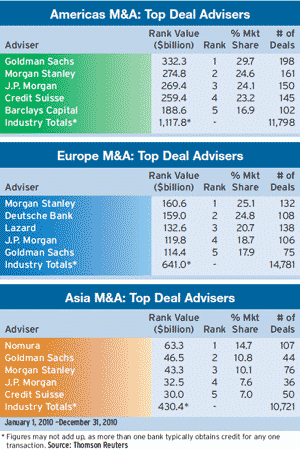 Steve Krouskos, global and Americas markets leader for Ernst & Young's transaction advisory service, says: "Companies are still cautious in terms of their overall capital position—or capital agenda. They have lasting memories of how the credit market shut down, so we do expect to see companies maintaining more cash on balance sheet as a safety reserve. In terms of acquisitions, we will see the use of some cash, but companies will access the capital markets as well. We will see a combination of cash and credit financing these transactions, as well as stock."

A number of recently announced deals are indicative of this, with Canadian financial institution Bank of Montreal agreeing an all-stock swap to purchase US firm Marshall & Ilsley for $4.09 billion, and Russian firm Uralkali's $8.22 billion purchase of an 80% interest in chemical and fertilizer company Sil'vinit also structured as an all-stock swap.

In 2010, worldwide private-equity-backed M&A; grew 89.2% over 2009—totaling $225.4 billion for the year, according to Thomson Reuters' 2010 Mergers & Acquisitions Review. M&A; growth is still being led by private equity firms, while corporate buyers are just beginning to catch the acquisitional fever, says Krouskos.

Of the $2.25 trillion in global mergers and acquisitions volumes in full-year 2010, according to the Thomson Reuters review, the US accounted for $773 billion—an increase of 11% over 2009. However, the largest individual deal in 2010 was in the emerging markets: Telecoms company América Móvil of Mexico snapped up its rival, Carso Global Telecom, for $27.5 billion. Another groundbreaking transaction was International Power's $25.1 billion purchase of GDF Suez Energy.

There will likely be a two-speed recovery in the M&A; markets, as slow growth is expected to continue in developed markets while emerging markets will continue to lead the way in terms of M&A;, as was the case over the past year.

The technology sector is expected to see a big pick-up in M&A; activity, according to Krouskos: "There is a blurring of boundaries in the tech space, with hardware firms acquiring software companies, tech services firms looking to acquire hardware firms, and hardware companies acquiring storage firms. We expect to see more of this in the coming year, and also a drive to grow geographic footprint." One clear example of this cross-product acquisitional streak was the battle between HP and Dell for storage firm 3Par—with HP finally winning the bidding war after agreeing to pay $2.35 billion—twice Dell's original offer for the firm.

The uptick in oil prices will also have an impact on M&A;—driving activity in the upstream space, while new technology continues to push down the cost of producing gas and electricity. Consolidation will continue, as strong utilities look to buy up those with weaker valuations. Duke Energy's $13.7 billion acquisition of Progress Energy, which was announced in January, is indicative of this trend. The all-stock transaction, which values Progress Energy at $47.48 a share, will create the largest utility in the US, with annual revenues of $22.7 billion. 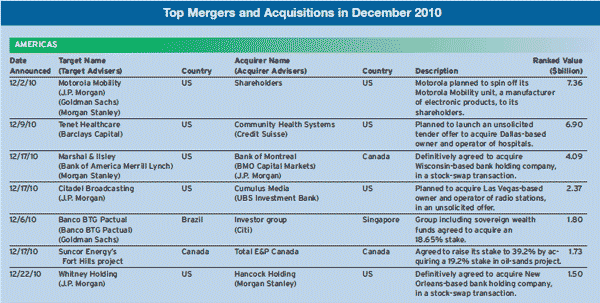 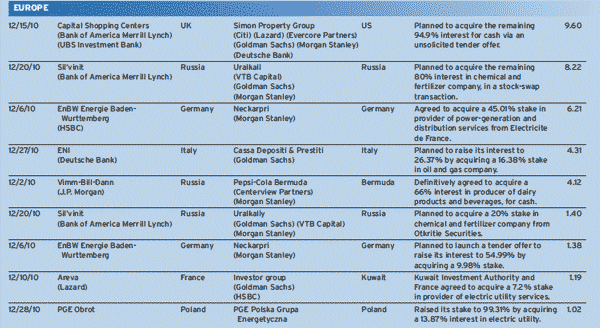