COMPETITION IN THE CAUCASUS: THREE'S COMPANY

Armenia, Azerbaijan and Georgia are competing to attract foreign investment. With much of Central and Eastern Europe still mired in a post recession slump, the Caucasian trio may all benefit. 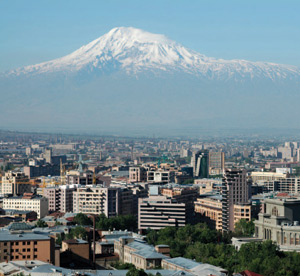 Over the past few months, international business magazines have carried full-page advertisements urging people to invest in Georgia and extolling the former Soviet Republic's achievements in facing down corruption and improving the business environment. Georgia's transformation from a post-Soviet basket case economy to a shining example of what determination and focused, far-reaching free-market reform can do is tough to beat. In 2003, before the Rose Revolution, living standards and expectations were low, corruption was rife, and foreign investment negligible. Today, despite the August 2008 conflict with Russia, Georgia has one of the most progressive and liberal economies in the world, with the World Bank's Doing Business survey and Transparency International both giving it favorable marks. The World Bank placed Georgia 12th out of 183 countries for overall ease of doing business, up one point from 2009.

"The World Bank says we are the Number One reformer over the past five years, having successfully pursued structural reform and large-scale privatization, largely eliminated corruption and massively improved tax collection," says Giorgi Badridze, Georgia's ambassador to the UK.

With Central and Eastern Europe increasingly resembling Western European countries with their rising real wages and costs, do Georgia and its South Caucasus neighbors Armenia and energy-rich Azerbaijan represent a viable new frontier for multinationals? "This is an exciting region, very different from the likes of Poland and Hungary—and relatively unknown," says Alice Mummery, a Caucasus analyst at the Economist Intelligence Unit.

Mummery cautions, however, that investing in the Caucasus can be difficult, citing high levels of corruption and bureaucracy. "The need for reform is still quite considerable, and the three economies are very different and so will attract a very different sort of investor," she adds. According to Jean-Louis Lavroff, head of operations at the EU Commission in Baku, Azerbaijan, doing business—except in Georgia—is also often a far-from-transparent activity. "It's easy to set up here (Azerbaijan, like Georgia and Armenia, has a one-stop shop for investors), but you may end up working in a situation very different from the West, where decisions take a very long time," he says.

The continuing recovery from the global economic downturn should reinforce the region's appeal, as should the substantial investments all three countries have made in infrastructure in recent years. The economies have also benefited from tough financial regulation and the local banks' lack of integration into the global banking system, which helped them sidestep the crisis. The banks' relative isolation from the global financial system does mean, however, that there is also a lack of competition and sophistication.

Relative Merits
While all three countries in the region are competing for the same international investment, each country has different strengths. Armenia's economy is relatively diversified, with competitiveness boosted by the 22% depreciation of the dram in March 2009, but for investors the main appeal remains the metals industry, made more attractive by the 2010 recovery in commodity prices. Economic recovery has been underpinned by the construction of a new airport terminal, as well as by concessional finance packages from Russia, the IMF and the World Bank.

Azerbaijan has also generated tremendous investor interest in recent years but appears to be faltering. Until last year it was one of the world's fastest-growing economies, largely because of its vast oil wealth, but in the first 11 months of 2010, the main contributor to growth was the nonoil economy, which grew by more than 5%. Beyond 2012 this picture will change on the back of significant planned investments in the vast Shah Deniz gas field and the exploitation of 200 billion cubic meters of gas and more than 30 million tons of condensate recently discovered at the Umid field in he Caspian Sea. Concerns remain about Azerbaijan's heavy dependence on the energy sector, but, says James Nixey, a Caucasus specialist at London's Chatham House economic think tank, "Baku has made undoubted progress in opening up to Western markets and putting its energy wealth to good use."

Neighboring Georgia has also faced considerable turmoil recently in the wake of its brief war with Russia over South Ossetia. But while Georgia's long-term recovery remains dependent on foreign direct investment (FDI) inflows, there are reasons for confidence. Investors have been active, particularly in the tourism sector, and the economy has bounced back impressively, with manufacturing output up 8.3%, financial services up 12.3%, trade rising 11% and hospitality businesses seeing 15% growth over the first 10 months of 2010. Until recently an energy importer dependent on Russian gas, Georgia, by virtue of its hydroelectricity investments, has become an exporter of electricity. have made Georgia an exporter of electricity. New gas contracts with Azerbaijan should safeguard future supplies.

"I'm confident the figures will show Georgia grew 6.5% last year. The challenge now is to maintain this momentum," says Badridze.

Time then to consider investing? All three countries are very different, yet there are opportunities across the board, notably in construction, tourism and financial services. In Azerbaijan, for example, only 10-15% of the population have a bank account. The use of credit cards and more modern innovations is in its infancy, which suggests considerable opportunities for proactive foreign banks. With global FDI flows yet to recover to precrisis levels, liberal Georgia, with its key energy transport role and close affinity with the West, also presents interesting possibilities for adventurous multinationals. The laggard is Armenia, whose economy was hit hard by fallout from the global crisis, but with the prospect of a 4%-plus growth rate in the coming years, that country too will most likely see a reassuring surge in investment.