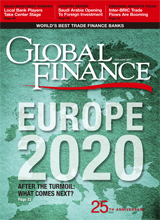 For months now public debate around the world has been dominated by the turmoil in Europe. The uncertainty is far from over, and what is at stake is not just the future of the Old Continent. World trade is integrally linked to the fate of Europe—affecting the prospects for exports to and from developed and developing countries.

Europe's crisis is also forcing a reassessment of many other aspects of the global economy—such as the role of multilateral organizations like the World Bank and the IMF, the role of rating agencies and the effect of their verdicts on the financial markets.

The "Europe effect" is also visible in recent economic data. For example, the World Bank in January reported that global exports of goods and services expanded last year at an estimated 6.6%, slightly more than half of the growth rate of 2010, and is projected to rise only by 4.7% this year. In nearly a year the price of energy has fallen 10%, that of metals and minerals by 25% and that of agricultural products by 19% from their peaks. This, in a scenario where world growth is expected to be at 2.5% this year and 3.1% in 2013—owing almost exclusively to the 5.4% increase expected in emerging economies. The euro area forecast is for a mild recession of -0.3%.

With our focus on Europe 2020, we take a medium-term approach to a very hot topic. Nobody knows what is going to happen in Europe in the near term. We look further down the road and evaluate how the possible outcomes for the coming year could evolve by 2020.

Personally, we here at Global Finance are rather optimistic about the future of the euro, mainly because the alternatives seem to be much worse than the current situation, but obviously the verdict is still out.

Outside Europe, phenomenal growth in some emerging economies and fast-growing trade between BRIC countries is replacing some traditional East-West trade. The retooling of the global economy is clearly continuing apace.