The deals were valued at a total of $6.13 billion and were the first privatizations under a $100 billion bailout agreement between Portugal and the European Central Bank and International Monetary Fund. China Three Gorges won an auction for the EDP stake, beating out Germany's E.On and Brazil's Electrobras, with a bid that was at a 53% premium to EDP's share price.

There will be additional privatizations under Portugal's bailout agreement. China's State Grid International is bidding for shares in REN, the second-largest utility in Portugal, in which the government holds a 50% stake.

Meanwhile, French utility EDF, Europe's largest power generator, agreed to raise its stake in Italian energy company Edison. EDF was seeking to gain full control of Edison, which has a market value of $4.3 billion, to gain access to natural gas resources and markets in the Mediterranean Basin.

EDF agreed to launch a tender offer to acquire the remaining 19.35% stake—effectively raising its stake to 80.7%. The Italian utility was expected to report a loss for the full year, in part because it is locked into expensive long-term gas-supply contracts with Russia.

The energy and power sector was the most active during 2011, accounting for 19.8% of announced M&A, according to Thomson Reuters. The value of worldwide deals totaled $2.6 trillion last year, a 7% increase over 2010. However, M&A activity in the second half of 2011 fell 24% from the first half of the year, amid volatile equity markets.

Cross-border deals totaled $908 billion last year and accounted for about 35% of overall deals, flat with a year earlier and driven by resources and financial sectors, which accounted for nearly half of announced deal volume.

There will be a greater focus this year on being able to navigate global market conditions, says Martyn Curragh, US transaction services leader with PwC. The hunt for growth remains a top priority for corporations, and PwC says it is continuing to see buyers looking toward the emerging markets, where local economies are in an upward cycle.

If the lending environment eases and access to capital becomes more readily available, PwC expects dealmakers in wait-and-see mode to unleash a wave of pent-up demand. 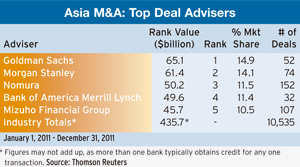 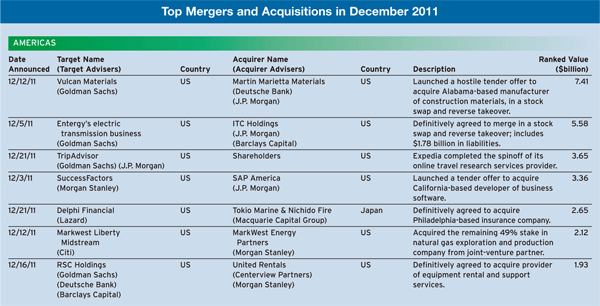 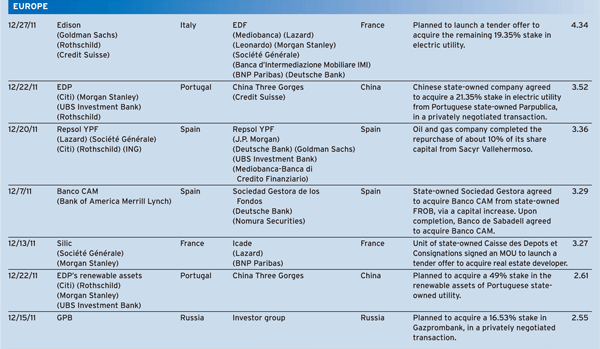