Saudi Arabia is working hard—and spending heavily—to diversify its economy and create jobs for its expanding population through a broad-ranging series of reforms. But these reforms are ruffling feathers in some quarters.

Saudi Arabia has a population of more than 28 million people, 70% under the age of 30. It also has double-digit unemployment and an economy that is tightly tied to oil production. In order to change both of these realities, the government has released a record 2013 budget incorporating a 20% increase in spending—to $219 billion, with $76 billion allocated for new infrastructure projects and $54 billion for education.

One of the administration’s biggest reform efforts lies in the labor markets. Saudi Arabia has been trying unsuccessfully for years to bring down its double-digit unemployment rate by persuading local companies to hire more Saudi nationals. A Saudization program—to increase the percentage of Saudis in the workforce—was first launched the mid-1980s and 1990s. It has since been replaced with a much more complex system of carrots and sticks, known as Nitaqat, or “ranges” in Arabic.

Unemployment, which is particularly high among women and young people, has become a hot-button issue in the kingdom in the wake of the Arab Spring uprisings in the region. “The private sector has enjoyed a very low labor cost for many years, and to solve the unemployment [problem], the government has to introduce a minimum wage and other incentives. Some of these initiatives were not welcomed by the private sector,” notes Ahmed Al-Khateeb, managing director and CEO of Riyadh’s Jadwa Investment.

The unemployment rate reached 12.1% in 2012 and was 36% for women, according to the Central Department of Statistics and Information. At the same time, there were eight million foreign guest workers in the country. Labor minister Adel bin Muhammad Fakeih created a stir in December when he suggested that about six million of these expatriate workers on low salaries “do menial jobs that do not suit Saudis.”

A controversial new law fines companies if they have a majority of expatriate workers, as is common in the building and construction industries, which hire mainly South Asians. Foreign workers hold 90% of the jobs in the private sector, whereas Saudis prefer to work for the government, which offers higher pay, benefits and more time off.

King Abdullah bin Abdulaziz Al Saud endorsed a request by the Shura Council, a 150-member advisory panel he appoints, to reduce the six-day workweek in the private sector to five days, with a total of 40 hours instead of 48 hours. Both public and private sector workers would get Thursday and Friday off. The public sector has a 35-hour workweek.

Mansour Al-Shatri, a member of the Riyadh Chamber of Commerce and Industry, said the proposal would in effect raise the salaries of expatriate workers by 30%, which would further increase the cost of living. Some 86% of foreign workers in the kingdom are paid less than the monthly unemployment benefit of Saudis. 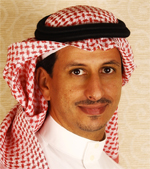 “The private sector has enjoyed a very low labor cost for many years, and to solve the unemployment [problem], the government has to introduce a minimum wage and other incentives. Some of these initiatives were not welcomed by the private sector”

Al-Shatri, who heads the chamber’s manpower committee, told reporters the new system would severely affect contractors who must meet project completion dates, as well as companies in the commercial, healthcare, industrial and education sectors. In addition to higher payroll costs, companies have to make contributions to the pension agency GOSI and spend more on training.

Women are barred from most jobs in a society where shariah law requires men to support them financially. More women must enter the labor force if the reforms are to have a significant effect on the unemployment rate. Fully 60% of those who graduate from Saudi universities are female. Saudi women will soon be allowed to practice law, but this will require the construction of separate facilities to prevent them from mixing with male colleagues. Government efforts to create more jobs for women have met with resistance from religious leaders.

A recent report by NCB Capital warned that implementing Nitaqat would lead to wage inflation and affect margins in the retail sector, although it admitted that the outlook for most retailers remains strong. Farouk Miah, head of equity research at the firm, says: “We believe the retail sector will be one of the [ones] most affected by Saudization rulings, given the relatively low percentage of Saudi workers at these companies. However, we acknowledge that the effective minimum wage of 3,000 Saudi riyals [$800] a month for Saudis working in the private sector and increased hiring of Saudis will support retail spending, particularly in the discretional sector.”

Some members of the Shura Council are angry they were not consulted on a law that came into effect in November 2012, requiring companies with too many foreign workers to pay a fine of $640 a year for each expatriate employee. The fees will be used to subsidize the salaries and training of Saudi workers, and provide daycare facilities and pay transportation allowances for female workers, since they are not allowed to drive.

The ministry of labor stopped several companies from filing visa applications electronically last November after discovering that they had registered 47,000 Saudi workers as private-sector employees, when they were in fact working in the public sector.

Under the new law, an expatriate worker can collect a $6,666 reward by informing Saudi authorities of violations in the workplace. Expatriate workers are calling for contracts that specify a minimum wage and pay for renewal fees and insurance premiums, and they want international standards to be enforced, but this is difficult in a country with a legal system where conservative judges resist implementing the reforms.

King Abdullah is seeking reforms to the slow-paced legal system, including standardized sentences and new training for judges. There is a general lack of precedents in many cases, since judges base their decisions on their own interpretation of religious law instead of a written legal code.

Meanwhile, some legal reforms have gone forward. A new mortgage law that has been a decade in the making could give the financial services sector a boost. The Saudi Arabian Monetary Agency, the country’s central bank, issued new regulations on real estate financing, leasing and supervision of financial companies, and the changes could boost residential lending to more than $30 billion annually.

Riyadh’s Jadwa Investment says bank credit to the private sector has continued to expand at a healthy pace. There has been a strong expansion in medium-term credit, as banks finance infrastructure and housing projects, Jadwa says. Saudi Arabia’s real GDP grew by 6.8% in 2012, with the private sector expanding at a 7.5% rate. Double-digit rates of growth were achieved in the construction, transportation and communications sectors.

“The Saudi government is creating the right environment for the private sector to prosper in order to allow diversification of the economy away from its reliance on oil,” says Al-Khateeb.

It remains to be seen how these efforts will pan out. With resistance to a number of these reforms from different segments of the Saudi business and consumer sectors, it is not an easy path ahead for the Saudi administration. However, so far the country seems to be steering a clear course toward reform. 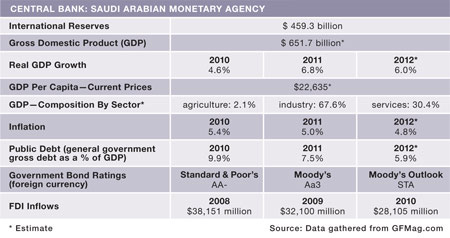