Those investors reaching for higher yields in a low-interest-rate environment propelled bond markets around the world to new highs in 2012, but analysts don’t expect the party to continue forever. 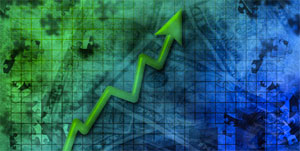 The Federal Reserve’s open market committee (FOMC) hinted in the minutes of its December meeting that it could take the punch bowl away before the festivities get out of hand.

The Fed’s balance sheet has already expanded to $2.9 trillion as a result of its purchases of securities in response to the financial crisis and the Great Recession. “Several [FOMC officials] thought that it would probably be appropriate to slow or to stop purchases well before the end of 2013, citing concerns about financial stability or the size of the balance sheet,” the minutes of the December meeting say.

While a majority of FOMC members appear to prefer the Fed to continue buying assets for the foreseeable future—or until the unemployment rate falls below 6.5%—companies are rushing to issue bonds before interest rates start rising. Both investment-grade and lower-rated corporations sold more bonds last year than ever before.

Thomson Reuters reports that the volume of high-yield corporate debt reached $389 billion in 2012, an increase of 38% from 2011 and the strongest year since records began in 1980. Issuers based in the US accounted for 72% of the global total, with a rise of 49% from a year earlier.

Global investment-grade corporate debt totaled $2.7 trillion last year, an increase of 15% from 2011 and an all-time record. New issuance of debt from companies based in emerging markets rose 32% last year to $306 billion and was the strongest on record. Issuers from Russia, India and Brazil accounted for more than half of the emerging-markets total.

It wasn’t only the new-issuance records but also the market performance that impressed bond market observers in 2012. High-grade corporate bonds returned 9.8% in 2012, according to Barclays. That was far better than the less-than-2% return on treasury securities. The Barclays Credit Index outperformed treasuries of similar maturity by 695 basis points last year, and spreads tightened by 86 basis points.

The top-performing sector in the corporate bond market last year was financials, led by life insurers. Spreads on financial and industrial companies narrowed to the tightest levels since the 2008 financial crisis. Industrial companies were the most active issuers, accounting for 47% of the new supply.

Euro-denominated international corporate debt increased by nearly 70% last year to the second-highest level on record. The all-time peak was in 2009. Despite the sovereign debt crises in Europe, there was continued strong demand by investors for European corporate bonds, according to Thomson Reuters. This enabled European companies to borrow at record lows, with the average coupon falling to 4.1%.

Asian debt denominated in dollars, euros or yen totaled a record $134 billion last year. Local currency debt in Asia totaled $441 billion in 2012, down 2% from the record set in the previous year.

The investment-grade European corporate debt market entered 2013 with positive momentum, despite spreads that were near multiyear lows, according to analysts at Barclays. European high-yield bond spreads tightened further after US policymakers managed to avoid going over the “fiscal cliff”.

Stresses in the euro area have receded for now, according to Barclays. Greece obtained another round of funding, buying at least a few months time. However, the Italian elections, ongoing fiscal consolidation and primary issuance will continue to create pressures in the next few months, the bank adds, and over the longer term, efforts toward greater European integration have reduced the ultimate tail risks.

Ford Motor was among the first investment-grade companies to issue in the US debt markets this year, following the fiscal deal in Washington. The second-largest US automaker sold $2 billion of 30-year bonds with a coupon of 4.75%. The bonds were priced to yield 180 basis points more than similar-maturity treasuries. The issue was Ford Motor’s first long-term bond since it regained its investment-grade status in May 2012.

US high-yield bond issuance totaled $27.5 billion in December, up from $25.6 billion in November, according to KDP Investment Advisors. The firm put total US high-yield issuance for 2012 at $320 billion. Among the biggest issuers in December were cable TV and telecom services companies.

DISH DBS, a unit of DISH Network, the second-largest US satellite TV services provider, raised $1.5 billion in a sale of 10-year bonds. The size of the issue was increased from an originally planned $1 billion. The proceeds may be used in part for spectrum-related deals, the Colorado company said. DISH has not fully spelled out its wireless strategy, but it has committed more than $3.5 billion of capital to acquire wireless spectrum.

Crown Castle International’s CC Holdings issued $1.5 billion of notes in a two-part offering. The company provides mobile telephone coverage to 92% of the Australian population. It also operates in 68 of the top 100 markets in the US, where it supplies infrastructure for broadcasting and mobile-phone service providers. 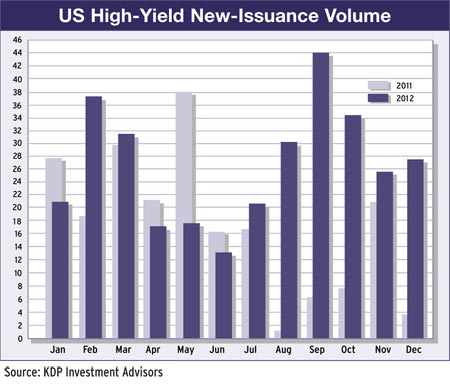