Global initial public offerings declined 29% in 2012 to $117 billion, reflecting steep declines in IPO issuance in Hong Kong and China, according to Thomson Reuters.

On an encouraging note, however, IPO activity in the fourth quarter of 2012 rose 54% from the third quarter.

The global IPO market was weighed down last year by a weak stock market in China and the sovereign debt crisis in Europe, Renaissance Capital says in its 2012 annual review. A lack of Chinese government-backed IPOs on the Shanghai and Hong Kong exchanges contributed to a 40% decline in proceeds raised in the Asia-Pacific region. IPO proceeds in Europe tumbled 64% from 2011, which included the $10 billion IPO from commodities firm Glencore.

Despite the low level of issuance, global IPOs rose 10.4%, on average, from their offer price. “The positive returns helped revive global IPO activity at the end of 2012 and should support stronger issuance in 2013 from the large $200 billion global IPO pipeline,” Renaissance Capital notes. The IPO pipeline continues to grow steadily, it adds, led by sovereigns looking to sell state assets to reduce debt. For example, Japanese railway and property firm Seibu Holdings is expected to list a $12 billion IPO this year.

IPO issuance in North America rose last year, thanks to Facebook’s $16 billion offering in May 2012. Five of the 10 best performing IPOs of 2012 were from US companies, and technology IPOs had a particularly strong year. Eight of the year’s 10 worst performers were from Asia Pacific, amid worries about China’s economic slowdown.

Financial and technology IPOs raised the most proceeds of all sectors in 2012, according to Renaissance Capital. Santander Mexico, People’s Insurance Company of China and Brazil’s largest investment bank, BTG Pactual, led the financial sector.

Global equity capital markets activity overall rose 1.5% last year to $630 billion, supported by a 15% increase in follow-on offerings, according to Thomson Reuters. Common stock sales from insurer American International Group boosted the US market share to 40% of all follow-on activity during 2012. The US Treasury’s sale in September 2012 of $20.7 billion of AIG stock was the largest US follow-on ever. AIG received a government bailout of $182 billion in September 2008. In December 2012, the US sold its remaining shares in the insurer for $7.6 billion, giving it a total profit on the rescue of $22.7 billion. Also in December, AIG sold its remaining stake in Asian life insurer AIA Group for $6.4 billion.

Equity and equity-related deals in Europe last year were led by financial company offerings, including UniCredit’s $9.5 billion rights offering. The issue was underwritten by a group of 26 banks led by Bank of America Merrill Lynch and Mediobanca.

The Russian government sold a 7.6% stake in Sberbank, in a rights offering last September that raised $5.1 billion. 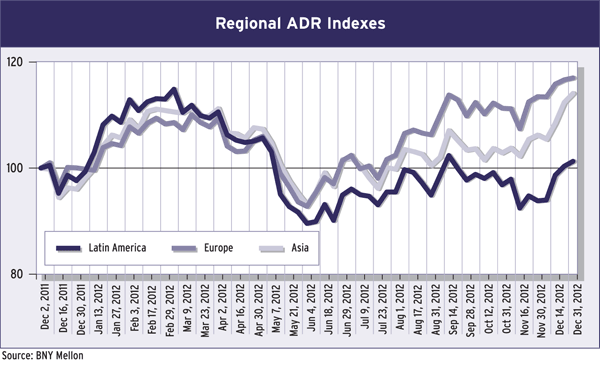