Central bank policies could create some interesting opportunities in the foreign exchange markets in 2013, despite what could be a slow-growth environment, analysts say.

“We expect the newly elected Japanese government to give the Bank of Japan a stronger mandate for targeting higher, much-needed inflation,” analysts at Barclays said in a recent report. “As a result, we expect the yen is likely to experience a large, one-off depreciation, mostly in the first quarter [of 2013].”

There is also the chance that the European Central Bank could embark on a more aggressive easing to support economic activity, which could pressure the euro lower in the medium term, Barclays says. In addition, the Federal Reserve could eventually respond to ongoing improvement in the US labor and housing markets.

Although the minutes of the December Federal Open Market Committee (FOMC) meeting suggested that the Fed could end its quantitative easing early, Barclays says it expects the Fed’s dovish monetary policy stance and aggressive balance-sheet expansion to continue.

The Japanese yen fell to its lowest level in more than two years in early January, as Shinzo Abe, Japan’s new prime minister, proposed that the Bank of Japan set a 2% inflation target.

Alistair Cotton, senior analyst at Currencies Direct, a London foreign exchange broker and international payments provider, says: “The market is primed for unlimited printing of Japanese yen. If the Bank of Japan doesn’t deliver as quickly as the market expects, there is a potential for a short squeeze.” During a short squeeze, market participants holding short positions in yen would be forced to buy the Japanese currency in a rising market in order to close out their positions.

Masaaki Shirakawa, the head of Japan’s central bank, pledged to work with the new government to fight deflation. He added, however, that both monetary easing and measures to support economic growth were necessary.

Karl Schamotta, senior market strategist at Western Union Business Solutions, says: “While Mr. Abe is undoubtedly sincere in wishing to make substantial changes within the Japanese economy, it is far from clear whether he will be able to achieve this. While many observers expect policymakers to simply bow to Abe’s demands, monetary officials are painfully aware that the country’s enormous government debt burden makes it vulnerable.”

Any misstep could put bond vigilantes on the warpath, Schamotta says. “Thus, the central bank may continue to chart its own path—at least until [Bank of Japan] governor Shirakawa leaves his post in April.”

Foreign exchange analysts at Barclays said the ruling Liberal Democratic Party and its junior coalition partner, the New Komeito Party, are likely to pursue reflationary policies aggressively in order to keep their approval rating high to win the upcoming Upper House election in July. They do not yet have a majority in the Upper House.

The Abe administration’s inclination toward larger fiscal stimulus could also be negative for the currency, Barclays says. The spending could create fears of a sovereign downgrade as well as increase the trade deficit, it notes.

Other Asian countries, such as South Korea, China and Taiwan, will face headwinds from Japan’s monetary experiment, Barclays says. These countries are major trading partners of Japan, and a weaker yen should directly affect imports and exports, the bank says. In addition, these countries compete with one another in other markets. A cheaper yen could slow South Korea’s export growth to the US, for example, according to Barclays.

The yen’s weakness was the main story in the foreign exchange market early in 2013, but there are other forces at work as well. Marc Chandler, global head of currency strategy at Brown Brothers Harriman, says: “There seems to be a collective sigh of relief that the full force of the US fiscal cliff that could have dragged the world’s largest economy into a recession has been averted.”

Market participants anticipate a further reduction in tail risks in Europe, according to Chandler. Although the big moves by the European Central Bank have already been conceived and implemented, the European Commission will do its part by granting several countries, including France and Spain, an additional year (and maybe two for Spain) to reach the 3% deficit target, Chandler says. 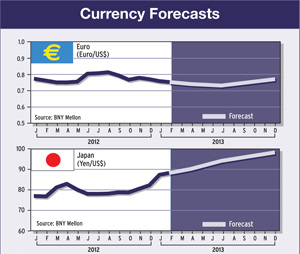 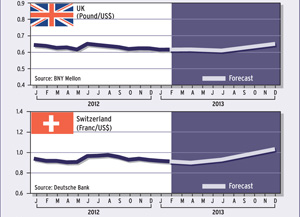 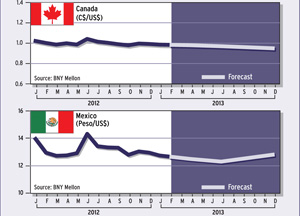 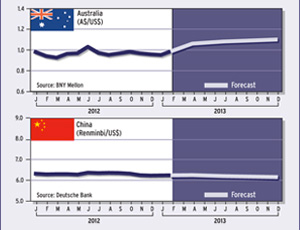 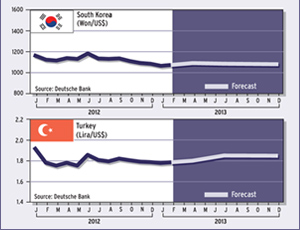