Bangladesh held national elections in early January despite escalating political violence and a boycott by opposition parties. The ruling party, the Awami League, easily kept control of parliament, with its candidates winning 232 of the 300 seats.

The primary opposition party, the Bangladesh National Party (BNP), joined other opposition parties in refusing to participate in the election, and more than 150 seats won by the AL were uncontested. The government claims that almost 40% of eligible citizens voted, but many believe the turnout was much lower. 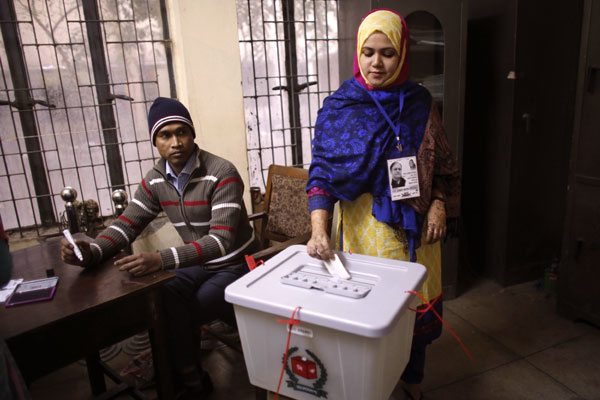 Voter turnout for recent elections is a matter of conjecture

In recent years the ruling party eliminated a nonpartisan electoral administration body and tried former political figures for crimes dating back to the country’s war for independence in 1971. The two moves solidified power for current prime minister Sheikh Hasina Wajed and her AL party while drawing criticism from domestic rivals, foreign countries and international organizations. The political instability has weighed heavily on the economy. Domestically, protests, blockades and boycotts have disrupted production and trade.

Despite the possible economic consequences, Hasina took her oath of office on January 12 without plans for a new vote. Professor Ali Riaz, politics and government department chair at Illinois State University, believes that Hasina and the AL should prepare for new elections. “This election lacks moral legitimacy, and this parliament should not be a vehicle for governing the country. It can be utilized as a vehicle for paving the way for an inclusive election.”

The BNP should also be willing to compromise, he believes, and to reconsider its ties with violent opposition groups. “The BNP may still have the power to create instability and challenge the government, but how to channel its support to a popular constitutional movement and involve its supporters is a question it needs to find an answer to,” says Riaz.