Central bank policies in the major economies will likely be the main guide for currency exchange rates this year, analysts say. Janet Yellen’s confirmation as the new head of the Federal Reserve points to cautious stimulus tapering, which should lift the dollar, according to analysts.

Mark Frey, senior vice president and chief market strategist at Cambridge Mercantile Group, which offers global payments and foreign exchange services, says: “I expect a much stronger dollar in 2014, as the Fed’s monetary policy becomes slightly less accommodative. The tapering has begun, and US employment growth is building.”

The Canadian dollar, in contrast, is entering a period of sustained weakness, Frey says. The Bank of Canada backed away from an expected rate hike last fall and is now neutral to slightly dovish, he says. The Canadian authorities would not be unhappy to see the loonie (as the Canadian currency is known) take a dip, Frey says. Not only would this help the country’s manufacturers to compete, as Finance minister Jim Flaherty pointed out recently, but it would also benefit Canada’s energy and commodity sectors, according to Frey.

Following years of sustained currency strength, Canada opened up a productivity gap with the US, Frey says. He expects the loonie to break 1.10 to the greenback before this summer, before rebounding later this year, as growing US consumption boosts demand for Canada’s exports.

The economic slowdown in China has hit Australia more directly than Canada, Frey says. “China’s cyclical buildup of inventories has run its course,” he says. “Over the next six to nine months at least, China will have reduced demand for commodity imports.” 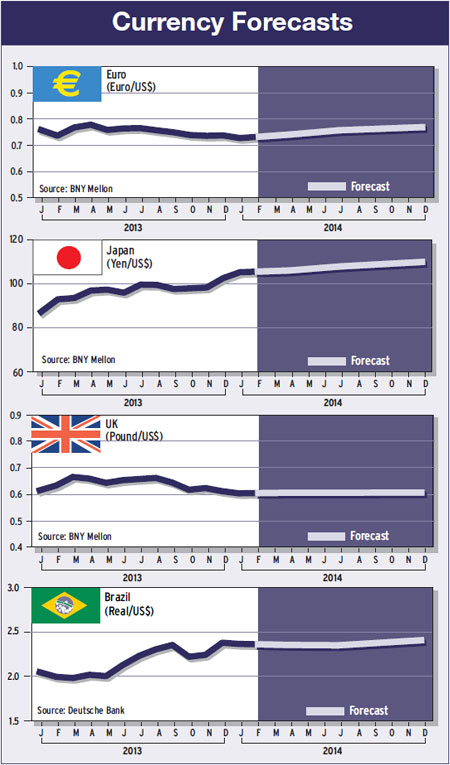 Meanwhile, the European Central Bank could be somewhat more accommodative over the course of this year, Frey says. The euro area’s core inflation rate fell to a record low of 0.7%, year over year, in December. “The ECB could begin to look at nonconventional monetary policy tools,” Frey says.

German employment remains robust, but the euro may be facing a period of volatility, as a result of diverging economic performance within the eurozone, he notes. The return of eurozone member Ireland to the capital markets in January was a very positive development for the euro, Frey says. Ireland exited its rescue program in December.

Marc Chandler, global head of currency strategy at Brown Brothers Harriman, says the institutional evolution in Europe continues, and an imperfect banking union is being established. “The ECB is likely to respond to adverse monetary developments, but unless the perceived threat of deflation increases, it is likely to refrain from extreme measures, such as negative deposit rates or outright purchase of bonds.”

The return of funds borrowed under the ECB’s long-term repurchase agreement has been the main reason for a drain on excess liquidity, Chandler notes. “At the same time, the only path of adjustment for the uncompetitive periphery members is internal devaluation, which means a relative decline in domestic prices has produced a disinflationary environment on the general level,” he adds. “Core countries, especially Germany, have refused to offset the austerity in the periphery with sufficiently strong stimulus.” As a result, this refusal has served to protect Germany’s external surplus, while creating low inflationary conditions, according to Chandler.

In the US, the Fed’s tapering process will likely be gradual, and may take the better part of 2014 to come to a complete stop, Chandler says. The drag from fiscal policy will likely lessen, he adds.