The Dubai Financial Market was one of the best-performing equity markets in the world in 2013, with the general index nearly doubling. Confidence in the emirate was boosted by news that it won the right to host the World Expo in 2020. The optimism may be overdone, however, according to London-based Capital Economics. The firm warns that Dubai’s win could result in a renewed rise in corporate debt. 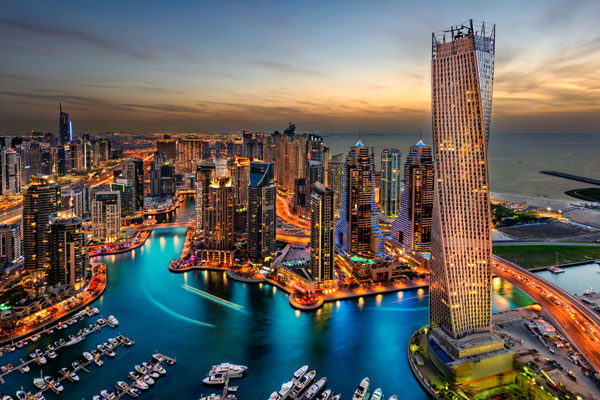 The World Expo is held every five years, and 2020 is the first time it will be in the Middle East. Dubai’s bill for upgrading its infrastructure to host the event will come to about $43 billion, according to Deutsche Bank.

Most of the investment will go into expanding the hotel and leisure industry, while about $10 billion will go toward improving the transportation infrastructure. Al Maktoum International Airport, a newly developed airport near the Expo site, has already begun receiving passengers. When completed, the airport will be able to handle 160 million passengers annually, making it the world’s largest international airport.

Meanwhile, neighboring Qatar is investing heavily to host the 2022 World Cup of soccer. Qatar, the world’s leading exporter of liquefied natural gas, also plans to hold a series of initial public offerings to spread its wealth among its people and to help develop its financial sector. As Global Finance went to press, Mesaieed Petrochemical, a unit of Qatar Petroleum, was planning an $880 million IPO. Foreign investors would be allowed to buy up to 15% of the company’s shares in the secondary market.

In Oman, BP won a deal to develop shale gas trapped deep under the desert. Mohammed Al Rumhy, the country’s Oil and Gas minister, says: “The Khazzan Project is the largest new upstream project in Oman and a pioneering development in the region in unlocking technically challenging tight [shale] gas.” BP will hold a 60% stake in the $16 billion project. It will use hydraulic fracturing technology to recover the gas.