Editor's Letter: Is The Future MINT? 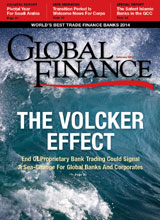 In 2001, Jim O’Neill, then chief economist and head of asset management at Goldman Sachs, created the acronym BRIC (which became BRICS later on with the addition of South Africa) to describe the most promising emerging markets. That was followed by the N11 in 2005, as in the “Next 11” economic giants, which included Bangladesh, Egypt, Indonesia, Iran, Mexico, Nigeria, Pakistan, Philippines, Turkey, South Korea and Vietnam.

Now, says O’Neill, is time to talk about the MINTs—Mexico, Indonesia, Nigeria and Turkey: their growth potential and chance to become economic superpowers in the near future.

Beyond the creation of successful acronyms, there is enormous potential in some emerging markets, and there is a huge—and growing—gap between those and the least promising ones. This range is relevant to delineate particularly at a time when emerging markets' strength in general is being questioned and as tapering by the Federal Reserve and other central banks is having its inevitable global impact. Brazil, Russia, India and China are certainly not showing the same growth pattern now as they did over the past decade. But they still have a leading role in world growth—and the MINT countries might have the same in the future.

Global in its nature, and even more so in its conclusions, this month's cover story looks at the effect of the upcoming ban on proprietary trading mandated by the so-called Volcker Rule. This new US rule, and similar regulation elsewhere, will affect banks globally and have a knock-on effect for corporates worldwide—with direct and indirect effects on debt issuance and stocks worldwide.

In our continued search for excellence and innovation in reporting, we also rank for the first time the safety of Islamic Banks in the Gulf Cooperation Council, according to their ratings with the three main global rating agencies. The methodology is the same as that of our “World’s Safest Banks” ranking—which is the cornerstone of our annual editorial calendar.