A total of $797 billion of equity capital was issued globally in 2013, up 27% from a year earlier, while underwriting fees rose 34%, according to Thomson Reuters. The volume of initial public offerings rose 40% last year, with the US recording the highest IPO activity since 2008. Europe’s IPO volume more than doubled last year. The biggest equity deal was a $9 billion rights issue by Barclays.

US issuers accounted for 34% of overall equity capital market volume in 2013, followed by Chinese firms, with 10%, and UK companies, with a 6% share. By sector, activity was led by financial issuers, followed by real estate, energy and power, and industrials.

Henri Leveque, leader of PwC’s US capital markets and accounting advisory services, says: “Driven by increasing investor appetite for growth companies, low volatility and strong equity markets, the field of IPOs has continued to broaden across industry sectors. The environment for IPOs has remained highly accommodative, and we expect the new-issuance window to remain open as we head into 2014.” Facebook’s $3.9 billion follow-on offering in December was the largest US equity deal last year.

Goldman Sachs was the leading global equity underwriter of 2013, followed by J.P. Morgan, Morgan Stanley, Bank of America Merrill Lynch and Citi, according to Thomson Reuters.

Neil Dhar, PwC’s US capital markets leader, says investors are seeking returns in a low-yield rate environment, and the IPO market has been an attractive place to invest in the past year. “Financial sponsors continued to pursue liquidity in their investments, with more than three times the proceeds raised by financial-sponsor-backed US IPOs in the fourth quarter of 2013 than the same period a year earlier.”

Renaissance Capital, a global IPO investment adviser, says the window for US IPOs remained open throughout 2013. Recent years, by contrast, had been marked by bouts of stop-and-start activity. “Taking advantage of the calmer market, private equity and venture-capital-backed deals saw meaningful upticks in activity,” the firm says.

With a growing backlog of IPOs, and economic indicators continuing to show signs of improvement, Renaissance Capital says it anticipates “another dynamic year for the US IPO market in 2014.”

The global IPO pipeline is also growing steadily, with Everything Everywhere, the largest mobile network in the UK, expected to raise $15 billion. Japanese railway and property firm Seibu Holdings plans an IPO valued at more than $12.4 billion.

Brazil’s Ministry of Finance lowered the tax on shares backing the issuance of American depositary receipts to zero from 1.5%. The tax had been in place since November 2009, in an effort to boost local trading and curb the flow of investment to overseas stock exchanges.

Deputy Finance minister Dyogo de Oliveira said removal of the tax would help to reduce the discrepancy between a company’s share price in Brazil and the price of a depositary receipt abroad.

Meanwhile, J.P. Morgan established a sponsored ADR in the over-the-counter market for Mills, one of Brazil’s largest engineering services companies.

BNY Mellon established sponsored DR programs under Regulation S for a trio of Nigerian companies. The DRs are restricted from sale in the US but may be resold overseas. The companies are: UBA Capital, a financial and investment services provider; Africa Prudential Registrars, a share registration company that once was a subsidiary of UBA; and Afriland Properties, a real estate company.

Deutsche Bank was appointed as successor depository for the Nasdaq-listed ADR program of LM Ericsson, and for the Level 1 ADR of National Australia Bank. 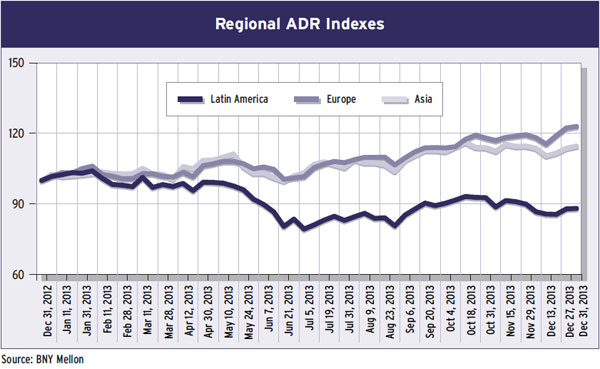