Features : Consolidation by Any Other Name

Global custodians are seeking new ways to demonstrate their commitment to a business that demands heavy capital investment.

Custodians—or, as they prefer to be known these days, global securities services providers—have never really stopped talking about consolidation in their corner of the banking industry.But the conversations turned from speculation to action last year when State Street snapped up Deutsche Bank’s custody business. 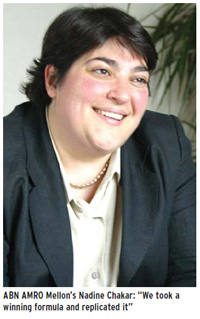 After a three-year hiatus in which little in the way of assets has changed hands, Deutsche joined a queue of European institutions that have quit the business.In Britain, Lloyds Bank,Barclays Bank and Royal Bank of Scotland have all washed their hands of the custody game, as did Morgan Stanley. Is Deutsche’s decision—after a determined effort to buy its way into a business that many observers never saw as a core competence of the German bank—a signal that will open the floodgates to further consolidation in the sector? Maybe. What it certainly is, says Nadine Chakar, chief executive of the ABN AMRO Mellon joint venture, is a sign that “size isn’t an indicator of anyone’s commitment to the business.” But most of the attention on the next phase of consolidation is actually on the next tier down, below the top dozen players: European banks that have a custody presence in one or two markets, but that can’t raise their game to service the growing volume of cross-border business in Europe.

When consolidation comes, however, it is less likely to be in the traditional form of outright acquisition. Instead, alliances are more likely to be the chosen route.The rest of the industry has been quick to question  the price that State Street paid for Deutsche and to point to other drawbacks to an outright buy. As one industry observer says,“The only benefits you get in an acquisition are from taking out costs.”

State Street executive vice president Jay Hooley brushes off those critics. The Deutsche Bank business has, he says,more than doubled State Street’s presence in Europe and given it coverage in multiple markets as well as depth of product through the acquisition of Deutsche’s marketleading accounting and performance systems. 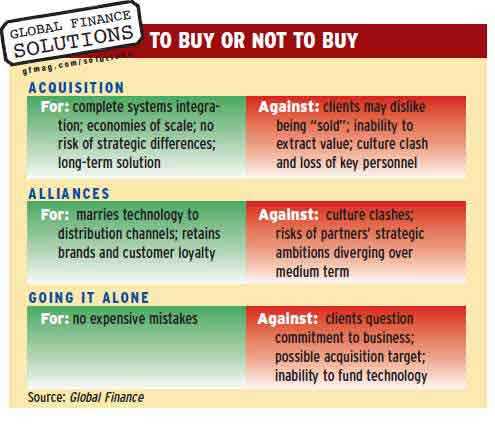 Deutsche’s business is, Hooley says, particularly important in northern European markets where the fund management business is likely to grow most rapidly in the next one-to-three-year period. It also delivers a 10-year deal to service the assets of Deutsche’s investment management arm.

That “makes enormous sense on a five-to-ten-year horizon,” says Hooley.“This isn’t just about 2003 or 2004.The contrast between this and an alliance with another European provider is night and day.”

Alliances can, nevertheless, look attractive on paper (see box below).The joint venture between Pittsburghbased Mellon Trust and ABN AMRO of the Netherlands has become the model of how a successful partnership can work. In fact the cooperation with ABN AMRO grew out of an earlier partnership between Canada’s CIBC and Mellon.“We took that winning formula and replicated it worldwide,” says Chakar.

ABN Mellon had earlier tried the organic growth path into Europe but, says Chakar, found it an uphill battle. In contrast, revenues at the joint venture have seen doubledigit growth in the past four years.And, she insists,ABN AMRO has taken the best of the two cultures and blended them into something that is neither exclusively Dutch nor wholly American.

The latest recruit to the alliance approach is another of the world’s biggest global securities providers: the Bank of New York (BoNY). BoNY is teaming up with ING, another player with an extensive distribution network and branch presence across Europe (including Eastern Europe). Wherever ING offers a global custody product, it will have the backing of BoNY’s massive investments in technology.

This feature echoes what happened at Mellon,where the US bank’s $100 million-a-year investment in technology has married well with ABN AMRO’s far-flung branch network. “These sorts of deals are likely to be a blueprint for others,” agrees Mark Austin, head of strategy and marketing for JP Morgan Investor Services (JPMIS) in Europe, Middle East and Africa.“They are well-suited to institutions that don’t necessarily want to make acquisitions and also to those that don’t want to exit the business completely.”

Austin notes that conditions in the European market have changed in a way that favors the alliance route: “The future in Europe looks very uncertain, with all the changes that are occurring in the market infrastructure and in regulation. It’s no longer so easy to value an acquisition on the assumption that future revenues will mirror past revenues.”That means that any moves by JP Morgan are more likely to be in the form of alliances.

But many custodians are reluctant to rule out all their options. Bob Gallagher, senior director of global network management at IBT in Boston, says that the bank has made a few selective acquisitions where there has been a very good fit with its existing businesses.

These have included the purchase of units from Chase, Bank Boston and Sanwa, as well as the development of its outsourcing capability on the West Coast, where it took over the in-house processing operations of Barclays Global Investors, one of the world’s biggest fund management groups. IBT is keen to expand in Europe and will look at either alliances or acquisitions “if it’s the right fit and it works for both of us. But we won’t do it just to grow,” says Gallagher.

Whatever happens, the factors driving consolidation won’t go away: Price and cost pressures, commoditization of the basic custody product, technology investments running into hundreds of millions of dollars a year and the inexorable rise of cross-border investing are all forcing marginal players to look hard at their involvement in the business.

The survivors will be those for whom global securities services are an absolutely core business, contributing a substantial chunk of earnings. That is certainly the case with the likes of State Street, Mellon, BoNY and Northern Trust. For everyone in the industry, says Austin, “there is danger in whatever you do, and there is also danger in simply standing still.”There will be more mistakes and more successes. Watch this space.