THE AMERICAS HSBC Extends Reach Among US Consumers

HSBC Holding agreed to buy Household Interna-tional, the largest indepen-dent consumer finance company in the United States, in a stock-swap transaction valued at $15.3 billion, extending the bank’s relationship to one in five Americans.

Household will bring the London-based bank, the world’s third-largest financial institution, some 50 million mostly lower-middle-income customers in North America.The transaction was the largest financial-services merger of 2002 and the year’s sec-ond-largest acquisition, after Pfizer’s $60 billion acquisition of Pharmacia.

“This deal brings together one of the world’s most successful deposit gatherers with one of the world’s largest gen-erators of assets,” says Sir John Bond, HSBC Group chairman.The acquisition meets HSBC’s stated goal of growing consumer assets while enabling Household to gain access to lower-cost funding.

Bond sought to reassure investors that Household has changed its aggressive lending policies. Last Octo-ber, under a nationwide settlement with state attor-neys general, the consumer finance company was forced to pay back $484 million to low-income borrowers who were allegedly duped into taking out high-interest-rate loans. A New York-based con-sumer group, Inner City Press/Community on the Move, is urging federal reg-ulators to block the trans-action on the grounds that Household overcharged some borrowers with records of late payments.

William Aldinger, chair-man and CEO of House-hold, which is based in the Chicago suburb of Pros-pect Heights, says the mer-ger will enhance the oppor-tunities for the consumer lender to build its business through HSBC’s financial strength and extensive product range.Aldinger will become chairman and CEO of a new holding company of the enlarged group in the United States by the end of 2003.

Rating agencies gener-ally reacted positively to news of the deal, reaffirm-ing HSBC’s ratings and announcing that they were considering an upgrade for Household. HSBC is paying about 1.7 times Household’s book value, representing a 34% premium over where Household’s shares traded before the announcement. 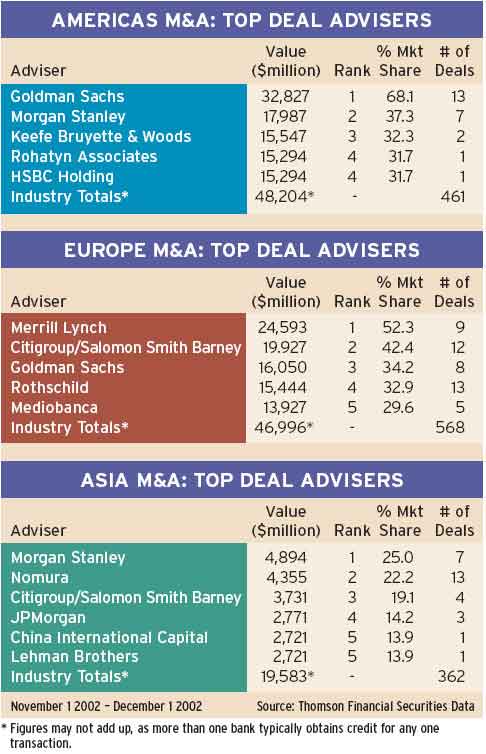 Schemaventotto, in which the Benetton family’s Edi-zione Holding investment vehicle owns 60%, planned to launch a tender offer to acquire Autostrade, the Rome-based highway oper-ator, for $7.8 billion.

Autostrade oversees 1,930 miles of freeways in Italy, representing 60% of the country’s toll-road net-work.The company is building highways in Washington, DC, and Birmingham, England. It also leases fiber-optic net-works along its routes.

Schemaventotto already owns about 30% of Autostrade. If it gains con-trol of the highway opera-tor, it plans to transform it into a holding company. Operating subsidiaries would manage and main-tain highway construction, telecommunications, infor-mation services to drivers and parking concessions.

The planned acquisition of Autostrade is part of the Benetton family’s diversifi-cation strategy that is moving it away from the clothing business.