Features : The End of the Affair?

January 01, 2003
Author: Dan Keeler
The United States, for years the undisputed leader in attracting foreign direct investment, is facing the prospect that it may become an also-ran in the race to pull in investors’ cash. 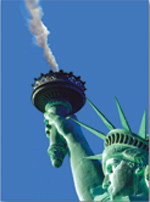 For nigh on a decade the United States has served as a magnet for investment as companies, managers—and above all immigrants—scrambled for a piece of the action in the world’s most vibrant economy. Old World companies such as BMW and Deutsche Telekom sought access to the biggest pool of consumers on the globe, either by setting up shop or by purchasing homegrown companies. Titans such as BP listed on the New York Stock Exchange in order to woo an army of share buyers.

And go-getter managers such as Vivendi’s Jean Marie Messier switched continents in order to cloak themselves and their companies in a little bit of American magic. Tim Congdon of Lombard Street Research in London says that European businesses, British particularly, bought into the theory that the United States had undergone a productivity revolution that would completely transform fair valuations of companies.

Old World Investors Become Wary
For a while, it seemed the Old World couldn’t get enough of the New. But now there are real worries that the decade-long influx of talent and money may be drawing to a close. With the US economy in a slump, its shoppers are no longer the honey pot they once were. Stung by losses on tech stocks and old-line businesses alike, shareholders are proving hard to attract to overseas companies they haven’t heard of. And a now-monotonous procession of corporate missteps has taken the glitz off the world of the US CEO.

Paradoxically, the efforts to find remedies for those corporate misdeeds may themselves be deterring overseas investors. In October last year, German luxury car maker Porsche pulled a planned listing on New York’s Big Board, citing worries over how the new Sarbanes-Oxley Act on corporate governance might collide with its own executive structure. Bermuda-based reinsurer Benfield, the world’s third largest, switched a planned float this year to London from New York, stating, “The board considers that the rapidly moving regulatory environment in the US, with its inevitable cost implications, is not attractive for a public listing of the shares at the moment.”

An Onerous Legal Burden
James Abbot, a partner at law firm Carter, Ledyard & Milburn in New York, says the legal burden of doing business in the United States has definitely escalated. It’s not just the increasingly onerous requirements of corporate governance that’s making the US a minefield for unwary managers; the country’s growing love affair with mass litigation has threatened to make whole industries uncompetitive. In mid-December, shares in Electrolux plunged almost 10% on news the Swedish white goods maker faced claims from over 14,000 people related to White Consolidated Industries, which the company bought in 1985.

Fresenius has reached a settlement with claimants, but there is much more woe to come. A December report co-authored by Nobel-prize winning economist Joseph Stiglitz for the American Insurance Association found that 61 companies with significant asbestos liabilities had filed for Chapter 11 bankruptcy, 15 of them in the first 10 months of 2002 alone. Total costs associated with asbestos claims may rise as high as $250 billion on some estimates.

A Republican victory in mid-term congressional elections at the end of last year brought prospects of tort reform a little closer, but any changes will likely be marginal. With tort claims costing around 1.9% of the country’s GDP, legal risks are looming ever larger as a potential barrier to doing business in the United States.

Deals Happen, But Not Many
Have growing uncertainties over the future of corporate America actually translated into a slowdown in overseas interest? Foreign companies seem to be voting with their feet. In 2002 just 31 companies listed on the New York Stock Exchange, compared to 51 the year before. Some deals still grab headlines: In November London-based HSBC Holding filled a gap in its globe-straddling franchise with the $14 billion purchase of Household International, the Prospect Heights, Illinois-based consumer credit giant. “A risk worth taking,” was how HSBC USA president and CEO Youssef A. Nasr described the purchase; some analysts questioned the wisdom of buying into the US consumer business at that point in the cycle, as well as snaffling a lender that had class-actions claimants snapping at its heels over alleged unfair lending.

But if the Household deal proved that the lure of the United States was still enough to attract a purchaser always regarded as “canny,” such deals were rare in the past year. According to data provider Thomson Financial, overseas companies bought just 792 US companies in the year up to December 18 2002 for a total of $78.4 billion, compared with a deal flow of $334 billion in 2000.

Data Paint a Gloomy Picture
That’s reflected in the wider totals for foreign direct investment; total FDI into the United States for last year looks set to have dropped by two-thirds from the preceding year—more than double the global average—to less than $40 billion, according to the United Nations Conference on Trade and Development (UNCTAD). Figures from the US government’s Bureau of Economic Analysis show that not only was FDI still declining rapidly but also the net inflow of cash had reversed and become a net outflow. During the preceding three months an average of $1 billion a month had been leaving the country.

According to the UNCTAD report, the reasons for the decline in international FDI are clear: “The uncertain economic situation and weak stock market are undermining business confidence, with a sharp impact on cross-border mergers and acquisitions and corporate investment expansion plans,” the report states. The drop-off was particularly sharp in the United States because such M&A; account for the bulk of FDI, the report adds.

And other countries have suffered, too. The United Kingdom, particularly successful at attracting inward investment in the late 1990s, has seen FDI volumes fall by more than three-quarters in 2002. But whatever the cause, the United States is now left contemplating the ignominy of being surpassed by China in attracting FDI.

All Is Not Lost
Still, the gloom can be overdone. Monty Graham, a senior fellow at the Institute for International Economics in Washington, DC, argues that issues such as corporate transparency loom large when investors make decisions over where to place their money. Even if uncertainty over the severity and effectiveness of future regulations is deterring investors right now, in the long run efforts to clean up corporate America will bear fruit.

Graham believes there is a bedrock of international investment that is robust enough to weather short-term economic difficulties: “There are a lot of reasons why foreigners invest here, and some of them just aren’t going to go away—for example, a strategic investment where, say, a non-US company will acquire a US firm to gain some technology,” he says.

In December, UK candy maker Cadbury Schweppes finally stumped up $4.2 billion to Pfizer to buy up Adams, the world’s second-biggest chewing-gum maker. Access to US retail shelves—where leading brands are a must—had long been seen as a weakness in Cadbury’s global presence.

There’s more evidence that foreign businesses’ love affair with all things American may not, after all, be over. In the third quarter of 2002 buyers returned to the United States, with $10 billion of net foreign direct investment (see chart 1). Seemingly unaffected by the tensions in the political relations between Europe and the United States, European investors led the charge, bringing in more than $6 billion.

The sudden revival of investment flows from Europe surprised some, who believe that a sustained recovery of investment, particularly from Europe, may be a while in coming. Europeans had their fingers most badly burned in recent years, with companies such as Daimler-Chrysler finding that US companies had their share of Old World sclerosis, too. “There is a certain amount of pull-back that has taken place since what looked like good candidates for mergers went ahead and found the merger didn’t work very well,” says Graham.

Will the Revolution Produce?
The pattern of future flows may be closely related to whether the so-called “US productivity revolution” of the late 1990s turns out to be a lasting fact. The jury’s still out on that: According to data from the US Department of Commerce, productivity was rising, but not as dramatically as was thought at the time (see chart 2).

Still, there’s little doubt the US economy did ratchet up a gear in the late 1990s, a shift that’s still placed it on a higher growth path than almost all of the rest of the world. Between 1995 and 2000 long-term GDP growth in the United States oscillated around 4%, according to Patrick Artus, chief economist at investment bank CDC Ixis in Paris. That compares to 3% in the UK and just 2% in Germany, France and Italy.  Productivity gains have declined since 1997 in most of the eurozone.

By contrast, US non-farm productivity rose by 5.63% in the year to September 2002, the highest rate since 1966. To be sure, some of that is technical, as companies typically squeeze out goods and services more cheaply in a recession. But it still shows the enduring strengths of the US economy—values that will likely continue to lure companies, investors and individuals stateside.