Lloyd’s is very much alive and kicking at a time when the industry as a whole has a lot of problems.” —Nick Prettejohn, Lloyd’s CEO 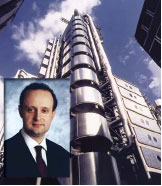 Unlike most people in the world’s roiled insur-ance industry, Nick Prette-john probably enjoyed this year’s holiday season.The 42-year-old CEO of Lloyd’s has just managed to push through a series of wide-ranging reforms of the 315-year-old London insurance market that he argues will posi-tion it for further growth in coming years.

Among the key provisions: a move to annual reporting from the current three-year cycle, a new corporate struc-ture that should help weed out laggardly under-writing syndi-cates, and provisions that should help new capital move in—and out—of the market. “Lloyd’s is very much alive and kicking at a time when the industry as a whole has a lot of problems,” says Pret-tejohn. Business was up 25% from the year before at the start of December 2002. Later that month, Prettejohn announced capacity for 2003 would come in at a record $22 billion.

After four years at Lloyd’s, Prettejohn took the CEO job in 1999. It wasn’t the easiest time:The market had slid into the red, the taint of ear-lier underwriting scandals still lingered, and some tru-culent members were con-tinuing to fight any attempts at reform.

Some things haven’t got-ten better:The market is still leaking money, posting a record hit in 2001. But that’s partly down to the World Trade Center disas-ter. Prettejohn points to the way that Lloyd’s reacted to that episode—lodging $5 billion in a US trust fund— as evidence of the market’s robustness.

Reform at Lloyd’s has come just in time.The new arrangements should be fully in place just as the relentlessly cyclical insur-ance market turns into the next soft phase.