The sun came out in the high-yield corporate bond market in November, narrowing spreads to treasury securities with record speed and eliminating most of the market’s steep losses for the first 10 months of 2002.

The half-point interest-rate cut by the Federal Reserve, along with signs of improvement in corpo-rate earnings, bolstered investors’ risk appetite and reversed the nearly year-long flight to quality that had widened spreads dramatically, analysts say.

“The credit sector was certainly overdue for im-provement, given the cheapening that occurred over the prior few months,” says Kenneth Hackel, chief US fixed-income strategist at Merrill Lynch in New York.“But the magnitude of the leap tighter [in spreads] leaves investors facing a sector with a much less attractive risk/reward trade-off,” he adds. 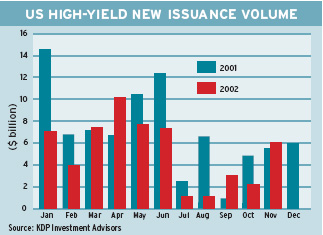 Spreads in virtually every sector of the corpo-rate bond market have narrowed to treasuries, Hackel notes, with the most-volatile components enjoying the greatest strength.“November’s per-formance by corporate bonds wasn’t just strong, it was literally off the charts,” he says. Merrill Lynch’s investment-grade corporate bond index out-performed similar-duration treasuries by 262 basis points in November, the best single month since the firm started keeping the statistic six years ago.

“The NASD has taken a significant step forward in promoting price trans-parency in the corporate bond market through the Trace corporate bond pricing feed,” says Richard McVey, CEO of Market-Axess.“We have taken the NASD raw data feed, tai-lored it for the institu-tional market and com-bined it with other elements of our trading platform.” 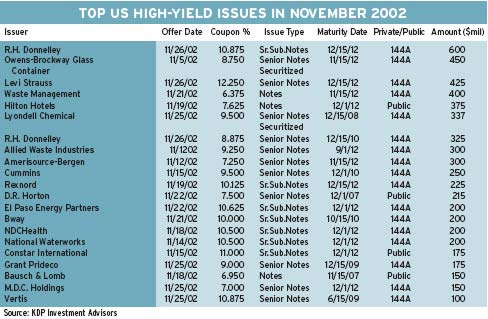