US corporate bond issuance is getting a lift from increasing business investment, as well as improving credit quality, according to the New Yorkbased Bond Market Association.
Corporate bond issuance rose 12.9% in the first three-quarters of 2003 versus the same period a year earlier, to $583 billion, it says.
US treasury issuance rose amid strong foreign demand, and mortgagerelated issuance set record highs in the first nine months of 2003.
Overall issuance totaled $5.38 trillion through the third quarter, a 40% increase over the same period of 2002.
“These numbers indicate that issuers of all types are finding the capital they need as they gear up for a likely economic expansion,” says Michael Decker, senior vice president for policy and research at the association.
US gross domestic product will grow 4.2% in 2004, according to the median forecast of chief economists at the association’s member firms.
“What had been a subpar recovery is beginning to gather strength,” says Richard Berner, chief US economist at Morgan Stanley, who is chairman of the association’s economic advisory committee.
“Fading post-bubble headwinds, easier financial conditions and extra fiscal stimulus have all primed the economy for vigorous and likely sustained growth in the coming year,” he says.

Tyco International Sells 10-Year Notes
Bermuda-based conglomerate Tyco International sold $1 billion of 10-year senior notes through joint bookrunners JPMorgan, Morgan Stanley and UBS Securities.
The issue was priced to yield 6.058%, 165 basis points over US treasuries.
Tyco will use the proceeds to pay down outstanding debt under its $2 billion five-year revolving credit facility.
As part of a divestiture program announced in November 2003,Tyco plans to sell its undersea fiber-optic telecom network and to exit more than 50 other businesses.

EUROPE Michelin Rolls Out Subordinated Debt
French tire maker Michelin came to market with a $600 million deeply subordinated debt issue.
Michelin thus became the first company to take advantage of a new French law allowing banks to launch lowestranking subordinated debt issues, according to SG, the joint lead manager with HSBC-CCF.
Despite having a lower rating than that granted to senior debt issues, the deeply subordinated issue was twice oversubscribed, SG says.The subordinated debt was issued with a re-offer spread of 195 basis points above the 10-year swap rate.
The 30-year issue has a call option at par on the 10th anniversary. If the call option is not exercised, the margin will be increased by 100 basis points at that time. 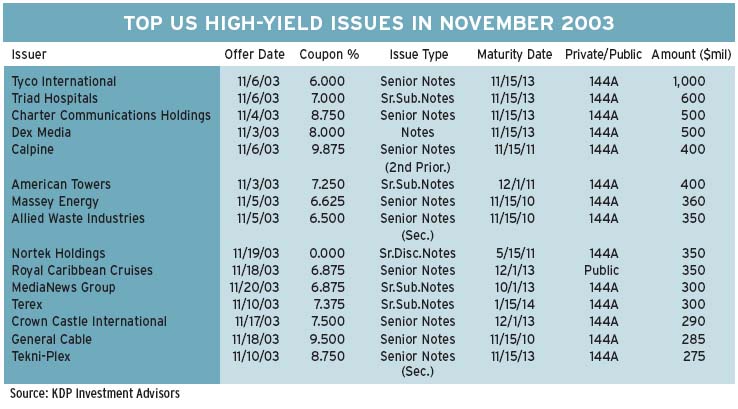