Features : When Doing The Right Thing Provides A Pay-off

The corporate world is still searching for definitive proof that corporate responsibility pays—and now the evidence is piling up. 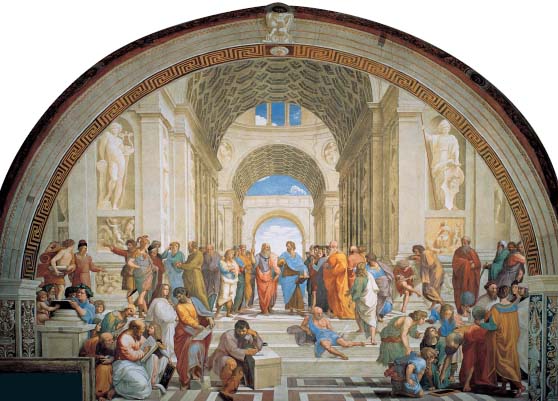 For a little more than a decade, companies have tried to meet increasing consumer and investor demand for them to ‘do the right thing’ through corporate citizenship efforts.However, with executives closely watching the bottom line, many now want to know if their efforts are paying off.
Whether it’s corporate citizenship, corporate social responsibility (CSR), sustainability or any number of other names by which these efforts have come to be known, studies indicate companies may already be reaping some rewards. One such study by Germany’s Oekom Research independent sustainability rating agency correlates sustainability with financial performance. The study, conducted in conjunction with Morgan Stanley Dean Witter, indicates shares of companies with good sustainability records perform better than those of their less socially responsible competitors. It examined 602 companies included in the Morgan Stanley Capital International (MSCI) World Index and also rated by Oekom on social and environmental performance.
Morgan Stanley calculated the share performance from December 31, 1999, to October 27, 2003, of companies receiving Oekom’s highest ratings and that of companies receiving lower grades. It found that the best-in-class portfolio outperformed sustainability laggards by 23.4%. Through early December 2003, year-to-date performance of the best-in-class portfolio outperformed the MSCI World Index as a whole by 3.8%.
While good sustainability performance can lead to better financial results, good financial results can allow a company more room to invest in better sustainability efforts. Good corporate management, the Oekom study says, also tends to produce better financial and sustainability performance.
Earlier in 2003, Oekom—which predicts sustainability ratings will be an integral part of common stock and bond analysis by 2010—also conducted a similar analysis of carmaker share prices. It found that those with top ratings, including Germany’s BMW and France’s Renault, saw their share prices rise by an average 8.8% between September 2000 and September 2003. Corporates on the lower end of the rating spectrum, which included mainly Asian companies, saw share prices drop by 9%.
Both studies indicate market players who contend sustainable investments do not provide worthwhile returns may be mistaken. “On the contrary, it is becoming more and more widely recognized that sustainability is a value-added factor,” says Markus Krisel, director of Morgan Stanley Private Wealth Management. “The positive correlation between sustainability and financial perfor- mance will provide an enormous boost to the sustainable investment sector.”

Executives are catching on to this new reality. More than 80% of respondents to a survey of CEOs in the US last year said good corporate citizenship helps the bottom line. The survey, conducted by The Center for Corporate Citizenship at Boston College and the US Chamber of Commerce, also found that CEOs want these efforts to be voluntary and not regulated, with 80% saying corporate citizenship should not be governed by law.Admitting a dilemma over which efforts to report, 85% said many companies are already doing more for their communities than is talked about.
The reality is also that CSR efforts require some degree of investment by companies, whether in implementing a program, changing a policy or even in taking the extra step to publish a report making their CSR strategies known. ‘Lack of resources’ was identified by 46% of respondents to the CEO survey as the primary obstacle to corporate citizenship, despite the fact that investment in this area has increased or remained constant among most companies polled. The survey concluded that most US businesses, regardless of size, provide cash, volunteer time or goods and services to their local communities. 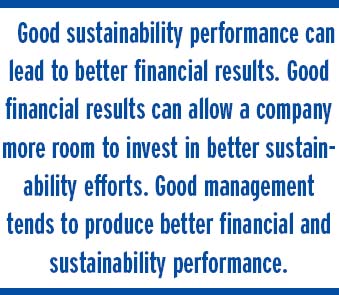 No matter the level of involvement, few companies can escape growing pressure to show some degree of commitment to social responsibility. For the World Eco- nomic Forum (WEF), corporate citizenship is equally as important these days as competitiveness and governance, forming a triad of pressures that the organization feels will shape business leaders’ agendas. Compliance and philanthropy, which had gained companies goodwill in the past, are no longer enough.
“In the face of the high levels of international insecurity and poverty, the backlash against globalization and the mistrust of big business, there is growing pressure on business leaders and their companies to deliver wider societal value,” notes a CEO survey on corporate citizenship conducted by the WEF and The Prince of Wales International Business Leaders Forum, adding that the situation calls for effective management of wider corporate impacts and contributions to society to make appropriate use of stakeholder engagement.
“Once again it requires new types of public-private partnerships to address challenges that are beyond the capacity or responsib i l i t y o f a n i n d i v i d u a l company or the private sector,” says the survey.“These include issues such as access to training and education, healthcare, water, energy, credit and markets, as well as tackling problems such as corruption, money laundering, crime and terrorism.” In 2002 WEF members not only signed a joint statement on global corporate citizenship but went a step further by designing a framework for action by CEOs and management.
In order to reap CSR’s bottom-line benefits, companies must present convincing evidence of their commitment, actions and motives lest they appear to be committed in name only. When asked to submit her nominations for Global Finance’s list of most socially responsible companies, Heidi von Weltzien Høivik, president of the European Business Ethics Network and associate professor at the Norwegian School of Management, said she could not make any recommendation.
“Many are just at the very beginning of understanding the issue and thus far from being recommendable in my opinion,” she said. “There is too much PR and too little substance so far.”


Sunny Misser, global leader of sustainability services for PricewaterhouseCoopers, feels results must be tangible and cohesive. “Most companies often ‘knee-jerk’ to pressures defensively, as opposed to having their own affirmative CSR strategies,” he says. “This can risk becoming a PR spin-management game, where the primary objective is to respond to stakeholder pressures through media messaging. Companies need to proactively integrate their CSR strategy into their business operations. The premise of CSR has to be based on content and performance, as opposed to ‘façade management.’” 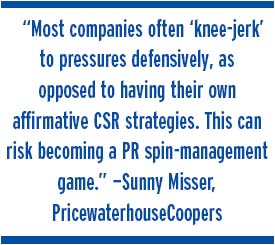 There are plenty of examples of companies paying more than lip service to CSR. The UK’s BP oil company backs up claims of its commitment to cleaner fuels and renewable energy by producing ultra- low-sulphur diesel (ULSD) for sale in the UK and Europe, supplying compressed natural gas (CNG) as a motor fuel in Egypt to reduce pollutants by up to 85%, and launching a biodegradable lubricating oil in Australia. Likewise, UK retailer Tesco established a crossfunctional committee that meets at least four times each year to track CSR results according to a list of key performance indicators.
While it is a company’s actions, not the PR spin, that are important, firms can benefit more from their efforts if they tell the world about them.The World Economic Forum’s CEO survey showed 48% of respondents have published some form of public report on their corporate citizenship activities, while 77% are using their Web sites to communicate this information.
According to the latest corporate sustainability survey by UK-based SustainAbility for the UN Environment Program (UNEP), the number of companies reporting CSR activities has risen but is still low, considering there are more than 50,000 multinational corporations and millions of smaller companies worldwide. Only a few thousand are currently issuing reports.

Those reports that are appearing are becoming increasingly comprehensive— and weighty. The average number of pages for CSR reports among companies benchmarked by the UNEP study rose by 45%, from an average of 59 pages in 2000 to 86 pages in 2002. Some point to an irony in this statistic: Protecting the environment—and protecting trees—is a cornerstone of most CSR programs. In trying to convey their achievements and goals, many companies have resorted to what the study calls “carpet bombing,” in which corporates inundate investors and consumers with information in the hope that they will find what they need. The search for proof of the business benefits of social responsibility is far from over, and analysts expect that companies will continue to seek ways to quantify the returns on their CSR investments. The Center for Corporate Citizenship at Boston College has partnered with Fortune 100 companies to develop a benchmarking system to measure the impact of corporate citizenship. There is still much work to be done on this front, but it seems significant steps are being taken that will allow CEOs in the future to better quantify how much bang they will be getting for their CSR buck.
“Economic performance is not limited to financial information,” says Misser. “However, several companies experience challenges with t h e n o n - f i n a n c i a l repor t i n g process, as tools and metrics to measure social and environmental performance are still evolving. Nonfinancial reporting, as it currently stands, has its limitations, but it still reflects a broader option for companies to disclose meaningful information that impacts their financial results.” ■