Milestones : “A currency bloc including Japan and China could be created by the end of the decade, ultimately leading to a currency union.”

As Japan and China increase their economic ties, currency issues are becoming more important. Japan is relying increasingly on China as a key export market to help boost the slowly reviving Japanese economy. With the Chinese yuan tied to a sinking US dollar, Japan worries that its exporters will lose their competitiveness in China.
One solution could be to entice China to abandon its dollar peg and join Japan and other eastern Asian nations in a regional currency bloc. Hiroshi Watanabe, director general of the international bureau at Japan’s Ministry of Finance, says a currency bloc including Japan and China could be created by the end of the decade, ultimately leading to a currency union.
The idea of an Asian currency bloc has been much debated since the 1997 financial crisis, when the region’s currencies began toppling like dominoes. The 10 members of the Association of Southeast Asian nations, plus Japan, China and South Korea, agreed in May 2000 to create a series of bilateral currency swap lines to head off a repeat of the 1997 disaster. The so-called Chiang Mai Initiative, named after the resort in northern Thailand where the 13 countries’ representatives met, envisaged the eventual creation of an Asian currency unit. In the absence of an immediate pressing threat, progress on this goal has been slow. Opposition has come from groups that feel threatened by closer regional economic ties, such as Japan’s farmers.
Watanabe says China won’t abandon is US dollar peg in 2004 but that it eventually will be convinced of the merits of more currency flexibility. If this doesn’t happen before too long, he says, the Chinese economy is in danger of overheating. An informal currency bloc with defined trading bands could be a first step on what will be a long road to a single currency for eastern Asia. 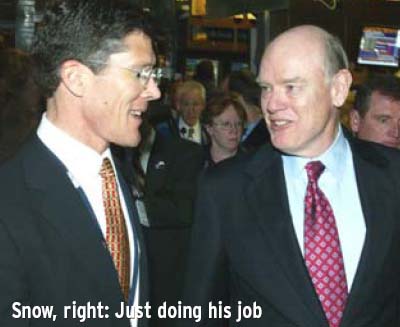 Fast-rising IPOs are making a comeback, thanks to investor enthusiasm for new issues from China. Investors lined up in Hong Kong in December to buy a piece of China Life Insurance’s $3 billion share offering. Banks opened two hours early to handle the last-minute rush of orders, as the 5% share allotted to individual investors was hundreds of times oversubscribed.The offering from China’s largest life insurance company was the biggest IPO of 2003.
Ctrip.com International, a Shanghai-based online hotel and airline booking company, saw its share price double during its first day of trading on the Nasdaq market in December. It eased back later to close with a gain of 89%, the biggest firstday gain in New York in the past three years.
Chinese truck and sport utility vehicle manufacturer Great Wall Automobile also came to market in December with an issue that was heavily oversubscribed.
Meanwhile, Chinese online game developer Shanda Networking has filed to offer shares on Nasdaq. The company hopes to raise up to $500 million.
Investors are rushing to buy shares of Chinese companies without heeding the warnings of US Federal Reserve chairman Alan Greenspan and others that the Chinese economy is in danger of overheating.While the exuberance that investors are demonstrating for Chinese shares may not be irrational in light of the country’s fast-growing economy, the risks are undeniable.The H-share index of China-based companies listed in Hong Kong more than doubled in 2003, reaching a six-year high.
Some brokers, when they are not too busy taking orders for Chinese issues, are cautioning clients that when the inevitable correction comes, it could be severe. Meanwhile, what is beginning to look like a China bubble continues to grow.