Newsmakers : “The Treasury and Justice Departments have fallen nearly a year behind in developing a plan to fight money laundering and terrorist financing.”

LOSING THE WAR ON TERRORIST FINANCING 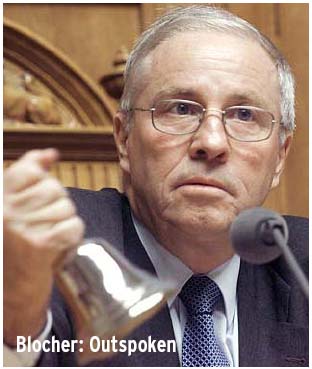 Bank secrecy is on the rise in Europe, while the US is falling behind in efforts to curb money laundering, making it possible for terrorist groups to get the financial resources they need to continue their attacks.
In Switzerland, the House and Senate voted in December to make the guarantee of strict bank secrecy a part of the Swiss national constitution. Although the constitutional amendment will be subject to a national referendum, it is expected to pass easily.
The vote in Parliament was pushed through by the right-wing Swiss People’s Party, or SVP, which won 27% of the vote in October’s general election, making the party the largest in Parliament. Christoph Blocher, the SVP’s leader, who is an outspoken proponent of bank secrecy,won a seat in December on the country’s seven-member executive council, or cabinet.
In Germany, a court in Munich ruled in December that Rolf Breuer, chairman of Deutsche Bank’s supervisory board, violated client confidentiality by commenting publicly in 2002 on the financial health of KirchMedia, which later collapsed. Bankers in many parts of Europe are obliged to keep any information about customer accounts strictly confidential.
While bank secrecy laws are frustrating efforts to track down criminals and terrorists, new banking regulations are being introduced worldwide to tighten the regulatory environment for corporates (see cover story, page 14).
In the US, meanwhile, the General Accounting Office, the investigative arm of Congress, says in a new report that the Treasury and Justice Departments have fallen nearly a year behind in developing a plan to fight money laundering and terrorist financing.The GAO cites turf wars between various government agencies and a lack of understanding about how terrorists raise and transfer their funds as reasons for the lack of action.

There are few women who have founded venture-funded technology companies. Veena Gundavelli, the chief strategy officer at Emagia in Santa Clara, California, happens to be on her second. She first cofounded Solix Technologies, an enterprise application services company, and helped grow the company to $20 million in revenues, with marquee customers, worldwide operations and more than 350 employees worldwide. Solix has been recognized as one of the 500 fastest-growing private companies by Inc magazine and is now expanding into the application data management space.
With that success under her belt, Gundavelli set about getting her next venture, Emagia, off the ground. She raised $7 million in first-round funding in March 2000 and a further $7.5 million in March 2003 from leading venture capital firms such as Sigma Partners and WestBridge Capital. Emagia, which sells products that provide automation and business intelligence on cash-flow processes to improve cash-flow management, focuses on driving down days’ sales outstanding, bad debts, operating costs, working capital and interest expenses.
Emagia targets companies with $500 million-plus in sales and already includes Solectron, Network Associates and Hyperion among its customers. Emagia has gained traction because “we brought value to customers,” Gundavelli says. “Solectron realized $15 million in the first year with Emagia. Hyperion slashed their days’ sales outstanding by more than 25% within six months of deployment. Leiner Health, a leading pharmaceutical products company, reduced their chargebacks by 30% in the first year with Emagia,” Gundavelli adds.
Emagia sales to date have been limited to the US, but it plans to open sales offices in London to service Europe in the first quarter of 2004. A private company, Emagia doesn’t report sales or profits, but it does have about 60 employees in the US and 40 performing developmental work in India—and probably has sales in the area of $10 million to $15 million.