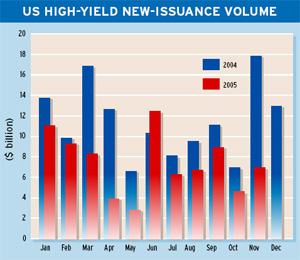 A series of debt-refinancing issues in the energy sector, as well as borrowing to pay for a major acquisition in the natural-gas industry, have helped to fire up activity in the US high-yield bond market. The volume of new issues rose 52%, to about $7 billion, in November from a month earlier, according to Montpelier, Vermont-based KDP Investment Advisors.

Oklahoma City-based Chesapeake Energy, the second-largest independent producer of natural gas in the United States, placed $500 million of senior notes due in 2020 with private investors in the US high-yield market. The notes, which carry an interest rate of 6.875%, were priced to yield 7% to maturity.

Chesapeake Energy also placed $600 million of senior unsecured contingent convertible notes due in 2035, as well as $500 million of cumulative preferred stock, to help pay for its acquisition of Charleston, West Virginia-based Columbia Natural Resources for $2.2 billion in cash and the assumption of $750 million in liabilities.

The acquisition would make Chesapeake the third-largest holder of natural-gas reserves in the United States, following ExxonMobil and ConocoPhillips. Chesapeake purchased Columbia from Triana Energy Holdings.

Aubrey K. McClendon, Chesapeake’s CEO, says less than 1% of the 400,000 wells drilled to date in the Appalachian Basin have penetrated below 7,500 feet, leaving substantial deeper-exploration opportunities available for Chesapeake to pursue.

Chesapeake plans to spend $200 million a year for the foreseeable future to further develop the acquired properties. In 2004 the company was the most-active driller of new wells in the US, drilling 561 wells of its own and participating in another 890 new wells drilled by other operators. Its drilling-success rate was 96% in 2004 and 97% in the first three quarters of 2005.

Separately, Philadelphia-based Crown Holdings completed a refinancing consisting of $1.3 billion of new credit facilities and $1.1 billion of senior notes. Crown Bevcan Europe & Middle East, a division of Crown Holdings, plans to build a new beverage-can production facility in Kazakhstan to serve the Central Asian region, where a number of soft-drink and beer companies are increasing their capacity.

This article appeared in issue January 2006