More than 1,000 unsponsored American depositary receipt programs were created in the last three months of 2008, in many cases without the permission of the companies whose shares are being traded in the US over-the-counter market.

The flood of new ADR programs for companies already listed abroad followed in the wake of the US Securities and Exchange Commission’s relaxed new rules that went into effect on October 10, 2008. The eagerly anticipated amendments to the SEC’s Rule 12g3-2(b) allow US depositary banks to register unsponsored ADRs on the shares of any non-US company that is automatically exempt from the registration requirements of the US Securities Exchange Act of 1934, provided certain conditions are met.

The new rules have made it much easier for depositary banks to set up ADR programs without an issuer’s approval. Non-US issuers no longer need to apply in writing for exemption from US reporting requirements, as long as certain disclosures required in their home market are made available in English on their websites. Since the rule change, most of the DR banks have rushed in to open programs.

Not Good for the Industry

“While we support the SEC rule change, we believe that new programs must be opened in a controlled manner and with the consent of the issuers,” says Claudine Gallagher, New York-based global head of the depositary receipts group at J.P. Morgan, which accounts for only a fraction of the new unsponsored programs. “Our point of view is that the practice of opening programs without consent is neither good for the company involved nor the industry,” she says.

Some of the new unsponsored programs already have been withdrawn at the request of the issuers. “It’s their equity, and they would like some control over the services offered to investors,” Gallagher says. “These unsponsored programs make it more difficult for them to track and follow what is happening.”

Since an issuer is not involved in the creation or the subsequent maintenance of an unsponsored ADR program, it has limited influence on the treatment of ADR holders, J.P. Morgan DR Group says in a white paper on the SEC rule change’s implications for issuers. It says that more than one unsponsored program can be opened in a single issuer’s shares by competing depositary banks.

Investors Could Be Confused
“Shareholder services vary between depositary banks, thus investor confusion could arise where multiple unsponsored programs exist for the same issuer,” according to the white paper. The SEC’s rule amendments are intended to ease access to foreign equities by US investors and to streamline and modernize the requirements for reporting material information, it notes. “However, it is J.P. Morgan’s opinion that unsponsored ADR programs should be opened only with an issuer’s consent and only in cases where the program will be beneficial to the issuer and where there is potential investor interest,” the white paper says.

For example, US dollar disbursements may vary for the same payment, depending on the foreign exchange rate applied by each of the issuing depositary banks to the entitlements received in local currency. In addition, depositary banks charge investors for various services according to their respective fee schedules, which vary.

“There are reputational risks as well as extra, unplanned burdens for investor relations departments at companies with ADRs that are being traded, sometimes without their knowledge,” Gallagher says. Traditionally, most ADR programs are sponsored and managed on behalf of an issuer by a single depositary bank.

Close Relationship Needed
Under a sponsored program, the issuer works in partnership with its depositary bank to determine the terms and conditions of the program, such as the rights granted to the holders of these securities. “Since creating the first ADR in 1927, J.P. Morgan has remained focused on developing strong, long-lasting relationships and maintaining close communications with issuers,” according to the bank’s white paper.

J.P. Morgan says ADR programs are not appropriate for all issuers. “The issuing company needs to invest in the program and wants to see that the program is somehow adding value,” Gallagher says. At a time when initial public offerings have dried up, depositary banks are eager to create new ADR programs, she says. “Some of the banks judge their success based on how many programs they have,” she adds.

In announcing its amendments, the SEC noted that since the adoption of its rules under Section 12(g) four decades ago, the globalization of securities markets, advances in technology and increased use of ADR facilities by foreign companies have significantly increased the number of companies that engage in cross-border activities and the interest of US investors in the securities of foreign companies.

“Recognizing that US investors continue to embrace global diversification, we are bringing much-desired DR supply to the US market,” says Michael Cole-Fontayn, London-based chief executive of The Bank of New York Mellon’s depositary receipt division, which has issued hundreds of new unsponsored programs since October. “US investors are increasingly generating demand for DRs as a simple, streamlined means for exposure to companies outside the US,” he says.

Deutsche Bank Trust Company Americas, another leading depositary bank, also issued a white paper on the topic of unsponsored ADRs. It notes that in order to accept deposit of a foreign issuer’s ordinary shares for the purposes of forming an unsponsored ADR, a depositary must file a Form F-6 with the SEC. In filing this form, the depositary bank asserts that it has a reasonable, good faith belief, after exercising reasonable diligence, that the issuer meets the requirements of Rule 12g3-2(b).

At a minimum, the requirements are that the issuing company, whose shares are listed on one or more exchanges outside the US, electronically publish English translations of its annual report, interim reports that include financial statements, press releases and all other communications and documents distributed directly to shareholders.
SEC Cites Comment Letter
Before enacting the rule change, the SEC solicited comments on whether it should require, as a condition for registering ADRs on Form F-6, that the issuer give its consent to the depositary bank, or at least that the depositary must have notified the issuer of its intention to register ADRs. The SEC decided not to require such consent or notification. It cited a letter it received from Deutsche Bank saying that, in practice, banks typically obtain the issuer’s consent before establishing an unsponsored ADR facility and, therefore, a rule requiring such consent was not necessary.

In a memorandum to its Brazilian clients, the law firm of Clifford Chance asked rhetorically what they would think if they woke up one day to discover that brokers and depositaries in the United States were using their company’s shares that trade on the São Paulo Stock Exchange to create multiple unsponsored ADR programs in the US without their consent, knowledge or participation. “Your company will be unable to negotiate the terms of these ADR programs, including the amount of any fees and charges payable by investors,” the memorandum says. The Brazilian company also could not negotiate the responsibilities of the depositary in managing the program and enhancing services to ADR holders.

The SEC has long taken the position that an unsponsored ADR program cannot co-exist with a sponsored ADR facility for the same deposited securities because of resulting market disorder or confusion, the law firm says. “Accordingly, your company should consider the creation of a sponsored ADR program that is registered with the SEC,” according to Clifford Chance. Once an issuer establishes a sponsored ADR managed by a single depositary bank, existing unsponsored programs are terminated and absorbed into the new program, it says.

“In this way, your company will maintain control over how and when its shares (or interests therein) will be treated in the United States,” the law firm says. By establishing a Level I sponsored ADR program, a non-US company can continue its current reporting practices. At a later date it could upgrade the Level I facility to permit SEC registration and listing on a US exchange.

The SEC has also stated that the depositary bank and the issuer, when filing to establish a sponsored ADR program, will be required to show that arrangements are in place to terminate any existing unsponsored ADR programs in a prompt and orderly fashion, according to Gibbons, a firm with 230 attorneys who advise global corporations and other businesses and financial institutions on corporate law matters.

“The SEC may require written confirmation from the depositary of the unsponsored program that it agrees with such arrangements,” Gibbons says. “This provides the incumbent unsponsored depositary bank with the technical legal ability to preclude a company from instituting a sponsored ADR program and, thus, leverage as to the identity of the depositary bank for the proposed sponsored facility,” it adds.

In an alert to clients issued in late October, Gibbons said, “It is apparent from the increased level of filings with the SEC that the unsponsored ADR environment is becoming less friendly than that suggested by Deutsche Bank, and that depositary banks are proceeding to establish unsponsored ADR facilities without the consent of the issuer.”

Companies Are Fighting Back
Many non-US issuers already have the necessary information accessible in English on their websites, allowing depositary banks to set up the ADR programs without getting the approval of the companies involved. Some companies are fighting back by posting disclaimers on their websites stating that they do not want any unsupported ADR facilities and that they will accept no liability in connection with such programs. They also say they will not commit to continue promptly posting English translations of required disclosures on their websites.
Düsseldorf, Germany-based ThyssenKrupp, a steel and technology conglomerate, is one such company providing a disclaimer on its corporate website. “The reason is very simple,” Alexander Wilke, a spokesperson for the company says. “The purpose of the disclaimer is to make sure that ThyssenKrupp does not promote any situation with regards to its shares where the company is not involved in the decision-making process.”

Compounding the challenges for non-US companies with unsponsored ADRs is that they have no control over the securities, which could potentially amount to a sizeable portion of their shareholder base, says Dominic Jones, a principal of Toronto-based Clarity Communications and founder of IR Web Report. “And since ADR banks typically only provide ownership information to companies that contract with them to provide a sponsored ADR program, the non-US firms will have difficulty determining how many US shareholders they have,” he says. 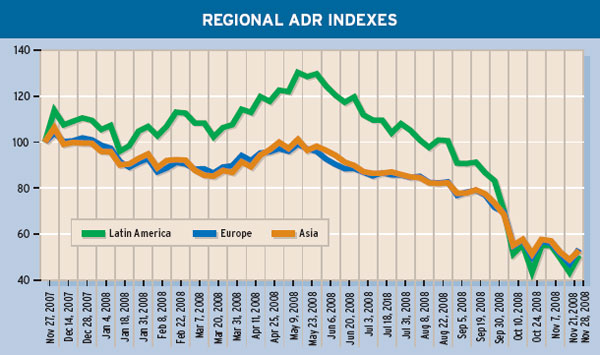 This article appeared in issue January 2009