A much needed explosion in infrastructure spending is already under way in both developed and emerging markets. 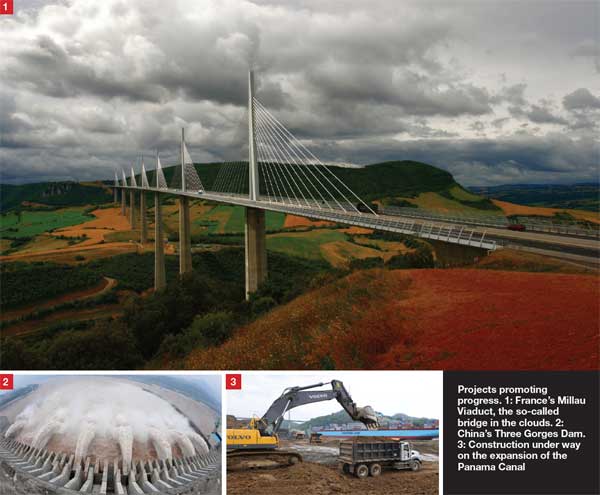 The world’s infrastructure will change dramatically in the decade ahead as a result of trends already in place, such as industrialization and rapid urban migration, as well as the need to reduce carbon emissions to head off an environmental disaster. An infrastructure-spending boom will be focused on emerging markets, especially those in Asia, where an expanding middle class is demanding a rising standard of living. Every country will participate, however, as infrastructure development is seen as the key to global competitiveness and a foundation for future economic growth.

The costs of this global building boom in the 2010s will reach into the trillions of dollars. How it will be funded and how individual projects will be selected have become matters of intense debate. China currently spends about 8% of its gross domestic product on infrastructure, versus 1.3% of GDP in the United States, says Norman Anderson, president and CEO of CG/LA Infrastructure, a Washington, DC-based consulting firm. He says the US needs to spend at least 3% of GDP on infrastructure to maintain the nation’s competitiveness and create jobs.

“The trick is to convince the Obama administration to make the creation of a National Infrastructure Bank a priority,” Anderson says. A well-funded infrastructure bank is needed to help move the US away from a carbon fuel-based system toward one based on renewable energy, he says. This would require an additional 1.7% of GDP in spending annually, he adds.

During his 2008 presidential campaign, Barack Obama proposed the creation of a National Infrastructure Bank that would sell special-purpose bonds to pay for its projects, in the same way that cities and states finance theirs. After a meeting with members of his cabinet and his economic advisers in November 2009, Obama said, “When we’ve got several trillion dollars of infrastructure that is falling apart, we need to put people to work, doing the work that America needs done. But we’re also in an era of fiscal constraint, which means that we’ve got to start finding more creative, new approaches to financing these projects.”

The National Infrastructure Bank (NIB) would be similar to the European Investment Bank (EIB), says Anderson of CG/LA Infrastructure. The EIB raises substantial volumes of funds on the capital markets and lends on favorable terms to projects seen as furthering the policy objectives of the European Union. “There is no way to get increased budgetary spending year after year to meet US infrastructure needs when the US is increasingly a debtor country,” Anderson says.

The US interstate highway system, which was developed 60 years ago under the administration of Dwight Eisenhower, is an example from a bygone era when the country’s infrastructure development was less fragmented, Anderson says. The NIB is strongly opposed, however, by Senate Finance Committee chairman Max Baucus, a Montana Democrat, who like many other members of Congress favors the current system of earmarks and formula-based allocations, which does not always allocate capital to the most meritorious ends. The administration needs the support of Baucus on healthcare legislation and is, thus, reluctant to pressure him right now on the infrastructure bank, according to Anderson.

According to a 2009 CG/LA Infrastructure report, estimated annual global infrastructure investment in 2030 would exceed $3 trillion, up from $1.2 trillion in 2010. By 2015, global investment will be greatest in highways and bridges, at $473 billion, but growth will be fastest in electricity transmission, with $276 billion of investment in the “smart grid” complex, and urban mass transit, with $137 billion, the report says. Some 20% of US automobiles will run on electricity by 2020, Anderson says.

The shift to renewable energy genergeneration, smart grids and electric cars will be disruptive, says Ryan Orr, executive director of the Collaboratory for Research on Global Projects at Stanford University, based in Palo Alto, California. Gasoline stations, for example, may have to be reconfigured as stations for replacing spent batteries with newly charged batteries, he says. Helping to accelerate the green revolution, Mitsubishi Motors, based in Japan, is continuing to refine its all-electric, zeroemission, subcompact car, which went on sale in Tokyo in mid-2009 and runs on a 330-volt lithium-ion battery pack.

Orr says there are four “mega-trends” in infrastructure finance that are likely to play out in the next 10 years. The first is the continued spread of PPP (publicprivate partnership) agencies globally. PPP models already exist in more than 45 countries, and there likely will be more private participation in infrastructure finance in the future, he says. “The NIB could be a crucial supplement to existing methods of financing projects, and PPP could provide a bigger bang for the buck through faster, cheaper and better delivery of some projects,”Orr says. The more important point, however, is that the projects financed by the NIB could be selected on the basis of merit, he adds. These regional or cross-state-border projects could be judged on how they help reach national goals, such as reducing greenhouse gas emissions, alleviating congestion and increasing energy efficiency.

A second mega-trend is the rise of infrastructure as a new asset class, alongside real estate and private equity, Orr says. After being hit hard by the global financial crisis, pension fund chief investment officers are becoming more sophisticated in how they invest in infrastructure, and they are discovering that there is an array of direct deals, coinvestments, partnerships, funds, managed accounts and other channels to choose from, he says. A third mega-trend is the availability of much more information about the behavior of host governments toward project investors as a result of the Internet, Orr says. “Governments can no longer get away with expropriation and other opportunistic behavior, because everybody will know about it with blogs, Twitter and searchable online news databases,” he says. On the other hand, ongoing regional political conflicts and terrorism seem likely to remain major considerations for longterm investors, he adds.

“A fourth trend is a developing shift in the opportunity set,” Orr says. “Instead of seeking to increase yield through innovative financial products in boring markets, institutional investors may seek to focus on plain-vanilla business models in countries with exciting GDP growth stories,” he says. They may select a proven business model, such as offering a basic financial product like home mortgages, in a country with fast-growing demand for such products, he adds. There may be changes in global capital flows, as demographic growth in OECD (Organization for Cooperation and Development) countries lags, and as some emerging markets demonstrate that their growth is in fact real and sustainable, Orr says.

Some $8.3 trillion of investment is needed in the 2010s to sustain Asia’s growth through a pan-Asian network of infrastructure in energy, telecommunications, transport, and water and sanitation, according to a study by the Asian Development Bank (ADB). Somewhat more ambitiously, the study also calls for a seamless common market and regional economic integration in Asia in order for it to reach its full growth potential. The investment of $8.3 trillion would produce a $13 trillion increase in Asia’s real income in the 2010s and beyond, it says. About half of the required investment is needed for energy projects, mainly power generation.

“The inadequacy of Asia’s infrastructure networks are a bottleneck to growth, a threat to competitiveness and an obstacle to poverty reduction,” the ADB says. Asian governments must mobilize regional savings, it says, adding that strengthening local-currency bond markets is a necessary step in this direction. Global project finance volume totaled $180 billion in the first nine months of 2009, a decrease of 31% from the same period a year earlier, according to Dealogic. Some 471 deals reached financial close during the first nine months of 2009, compared to 597 deals during the same period of 2008.

Project finance volume in Asia bucked the global trend and rose 18% in the first nine months of 2009 from the comparable 2008 period to a record $56 billion, according to Dealogic. India was the leading nation globally in project finance activity in the first three quarters of 2009, with 59 projects totaling $43 billion, including four of the world’s top 10 projects for the period. State Bank of India was the top mandated arranger of project finance loans, with 38 deals valued at $22 billion.

Infrastructure investment in China is dominated by the public sector, with little opportunity for foreign banks to compete, since state-owned banks are funding virtually all of the demands of local developers.

In Europe, governments have bailed out many of the top project finance banks, which have since left the longterm lending market. Those banks that have stayed with the market are now finding that it is a good time to be lending, since terms have become more attractive. The future of project finance lending will depend to some extent on capital requirements placed on banks, which are likely to be increased and which will vary according to country risk.

The project finance market is going through a tumultuous period, but pension funds and other long-term investors are seeking new ways to tap into the reliable cash flows offered by well-thoughtout projects. As long as host governments allow foreign investors to benefit from their faster GDP growth, the funding seems likely to be available to support the building boom of the 2010s.