Companies based in China and Brazil led a global rebound in initial public offerings in the second half of 2009, and emerging markets are likely to continue to lead the IPO parade in 2010, analysts say.

“China and Brazil are clearly playing an integral role in leading the global economic recovery,” says Gregory Ericksen, global vice chair, strategic growth markets, at Ernst & Young. The largest IPO in 2009 (for the year to date as of early December) and the largest in Brazilian history was Banco Santander Brazil’s $7.5 billion offering.

China-based companies were the largest source of total funds raised globally in the first 11 months of last year, according to Ernst & Young’s year-end global IPO report. Of the top 10 IPOs through November, six were from emerging markets.

China State Construction Engineering’s $7.3 billion IPO was the secondlargest new issue in January-November 2009, followed by Metallurgical Corporation of China, which raised $5.2 billion on the Shanghai and Hong Kong stock exchanges.

“Not only has there been a welcome return to activity with a series of significant listings, but it is also noticeable that dynamic companies from emerging markets continue to list on their local stock exchanges,” Ericksen says. “The principal exchanges in China, India, Brazil and other emerging markets are now mature enough to source funding for the very largest companies seeking listings,” he says.

Asia and South America together accounted for 72% of the total IPO value in the first 11 months of 2009. Although the number of deals was down dramatically from the same period a year earlier, the amount of capital raised was nearly equal and was expected to total $100 billion by the end of December 2009.

China Longyuan Power, the country’s biggest windpower producer, raised $2.2 billion in an IPO in Hong Kong on December 10. The shares rose 9.4% in their first day of trading. The company plans to use about half of the proceeds to increase its generating capacity in China, which is increasing its use of renewable energy in an attempt to reduce reliance on coal, which is more polluting. China Longyuan plans to double its wind-power capacity to 6.5 gigawatts by the end of this year. China Investment Corporation, the nation’s sovereign wealth fund, invested $400 million in the IPO.

The third-largest budget hotel chain in China, 7 Days raised $111 million through American depositary receipts that were listed on the New York Stock Exchange. The company selected Citi as the depositary bank for its ADR program. In its prospectus, 7 Days says, “We strive to offer consistent and highquality accommodations and services, primarily to the growing population of value-conscious business and leisure travelers who demand affordable, clean, comfortable, convenient and safe lodging.” 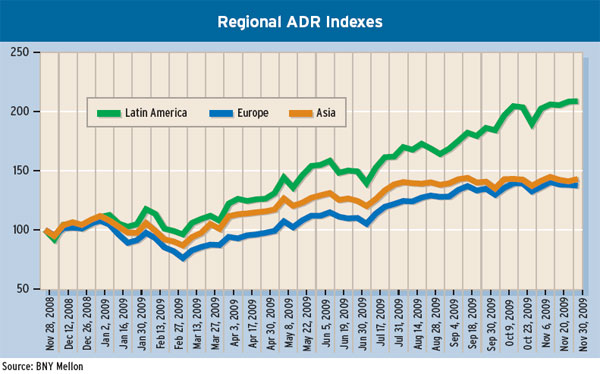