The high-yield corporate debt market was unscathed by the dramatic sell-off in the US treasuries market in early December that followed news of President Obama's deal with congressional Republicans to renew the Bush-era tax cuts and extend unemployment benefits. The debt deal could stimulate US economic growth and lower the likelihood of defaults in the corporate bond market, analysts say. As a result, spreads on high-yield bonds narrowed versus US government debt, offsetting the effect of higher rates and cushioning the impact of the debacle in the bond market.

The corporate default rate in the US fell to 3.47% in November 2010, continuing its steady descent from a peak of 14.66% in November 2009, according to Moody's Investors Service. "We remain of the view that 2011will see very few high-yield defaults, outside of a double-dip recession scenario, which seems increasingly unlikely given Federal Reserve policy and the nearly complete deal on tax-cut extensions," Moody's said in a report.

The global speculative-grade default rate fell to a two-year low of 3.3% in November 2010 and is expected to continue falling to 1.8% by November 2011, Moody's says. Corporate defaults are falling as the economy recovers, profits increase and the debt markets remain open to lower-rated borrowers, it says.

"However, there are risks that defaults may increase, particularly if financing becomes scarce in the European markets," says Albert Metz, Moody's director of credit policy research. Nonetheless, for the time being, issuers are able to find the liquidity they need when they need it, he says.

The rise in US government bond yields has been painful for investment-grade borrowers, while the narrowing in spreads has helped issuers of high-yield debt fare somewhat better, according to Barclays Capital's credit research department in New York. The lack of sensitivity of high-yield debt to rising rates was on full display, as the spread moved tighter at the same pace that rates moved higher, it says. The benchmark 10-year treasury yield rose to a six-month high of 3.33%.

Meanwhile, high-yield debt issuance in the US, which reached a record for any full year by September 2010, remained strong through November, when it totaled $30.5 billion, according to Montpelier, Vermont–based KDP Investment Advisors. Most of the issuance was by companies seeking to replace higher-cost debt to strengthen their balance sheets, rather than for spending.

The biggest new issue in November was by Nashville, Tennessee–based HCA, which placed more than $1.5 billion in senior notes with investors to help pay a shareholder dividend to its private equity owners. 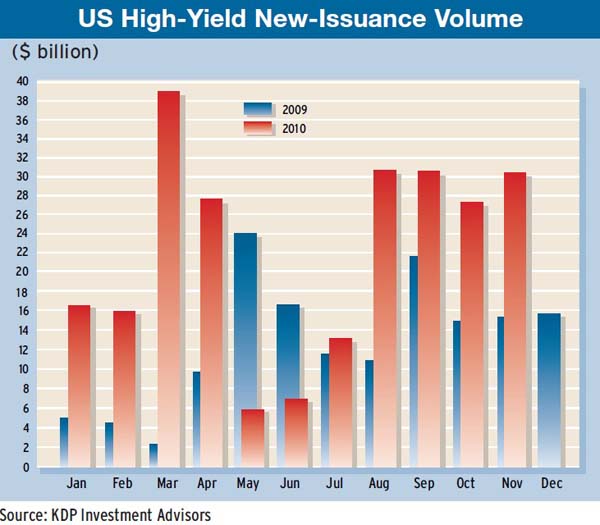 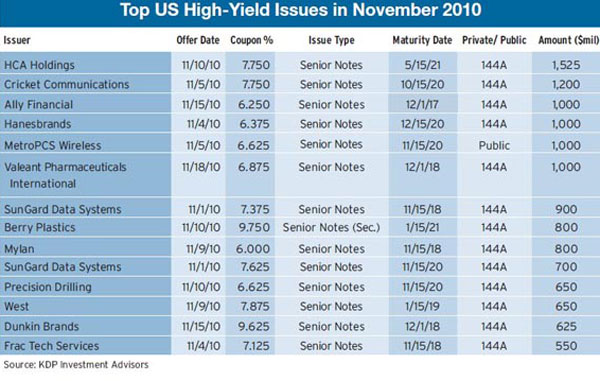