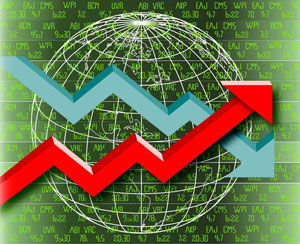 Coming off the bailout of Ireland, and with several other European countries denying they need outside help, the outlook for the financial markets in 2011 is somewhat clouded, but emerging markets will continue to attract investors in the year ahead, according to bankers who specialize in depositary receipts. "The aftershocks of the global financial crisis that hit the world in 2008 make navigating the markets quite a challenge," says Michael Cole-Fontayn, chief executive of BNY Mellon's depositary receipt business. "The outlook is mixed in Western Europe, and coupled with a fairly dull recovery in the US, this means that the focus will continue to be on emerging markets in 2011."

Companies based in Brazil, Russia, India and especially China—the Bric countries—will continue to lead the way in DR capital raising in the year ahead, bankers forecast.

"The higher-growth markets will appeal to investors," Cole-Fontayn says. "According to the findings of our 6th Global Investor Relations Trends survey, companies will follow the capital and will raise more equity in Asia." Standard Chartered Bank, for example, became the first foreign company to list in India through an issue of Indian depositary receipts last May.

DR programs have never been more popular with corporate issuers, as well as with investors, Cole-Fontayn says. "The value of DRs increased substantially in 2010, and investors have been rewarded for taking risks in emerging markets," he says. "Those who hesitated have missed some opportunities." While there is a risk that Europe's sovereign debt crisis could spread to Portugal and Spain, the European Central Bank has extended an emergency loan program and is buying bonds of peripheral European economies to keep the crisis contained.

One lesson of the global financial crisis is that markets are correlated, Cole-Fontayn says. "But the G20 [group of 20 leading economies] seem united when they meet at times of crisis," he says. There will be windows of opportunity in 2011 for well-prepared issuers to raise capital, Cole-Fontayn says. "We expect an acceleration of European financial institution capital-raising, to get ahead of any potential bailout activity and to prepare for Basel III capital standards," he says.

Meanwhile, India could accelerate its privatization program, and its economy has been surprisingly strong, Cole-Fontayn says. The Russian market is also attractive, he adds. Russian GDR offerings in London recently included a supermarket (St. Petersburg-based O'Key), a technology company (Mail.ru) and a transportation company (Transcontainer, a subsidiary of Russian Railways).

Companies based in China accounted for 34 capital-raisings in the first 11 months of 2010, and Brazil has the most open market of all, Cole-Fontayn says.

Nancy Lissemore, managing director of depositary receipt services at Citi, says $17 billion of equity capital was raised in DR form globally from 57 IPOs and follow-on issues in the first 11 months of 2010. This was slightly more in dollar terms than in the same period a year earlier, when there were 49 such issues. "We expect continued growth in the number of deals and in the dollar amounts in 2011," Lissemore says. "There is a healthy pipeline of new issues."

The Bric countries led in DR capital-raising in 2010, and they will lead the parade in 2011, with some additional countries, such as Taiwan and some Middle East nations, joining in, Lissemore says.

US investors will continue to invest in emerging markets in the year ahead, she adds, although there could be some short periods of pullback as a result of Europe's debt crisis, for example, or a worsening of the situation on the Korean peninsula. Citi's economists expect emerging market economies to grow 6% on average in 2011, versus 2% growth in the developed countries. "Meanwhile, corporate earnings are likely to increase by 15% in emerging markets next year, and valuations are far from bubble territory," Lissemore explains.

China and Brazil Most Active

Akbar Poonawala, managing director and head of global equity services at Deutsche Bank, says a majority of all equity capital raised in DR form in the first 11 months of 2010 was in China and Brazil, up significantly from 2009. "Despite the overall market conditions, DR custodian banks still managed to hold their own in the amount of DR capital raised in 2010," Poonawala says. "The issuance has been concentrated among the Bric countries, mainly Brazil and China. Our hope is that we will see companies from some other countries stepping up in 2011, even as Brazil and China continue their march," he says.

The metals and mining sector, including energy companies, accounted for more than half of DR capital raised in January to November 2010. "The emerging markets have become a more mainstream asset class," Poonawala says. While US investors allocated a small percentage of their equity portfolio to overseas companies in 2000, that percentage had significantly increased by 2010, he says. "There apparently has been a sea change in the way investors view emerging markets, which have recently come to be regarded by some as a refuge against volatility and currency depreciation in developed markets," he says.

Claudine Gallagher, global head of depositary receipts at J.P. Morgan, says DR capital-raising activity was slow in the early part of 2010 but picked up later in the year. "Perhaps the equity issues in 2011 will be more evenly distributed," she says.

Gallagher expects to see a steady flow of issues from India and China in 2011. "When Russia and Brazil come to market, they come in a big way," she adds. Petrobras, the Brazil-based oil company, raised $10 billion in a secondary offering of ADRs in October 2010. J.P. Morgan was the depositary bank and was also recently appointed sole sponsor and depositary for Brazil-based mining company, Vale, which became the first company in the world to obtain a Hong Kong DR (HDR) listing.

Aluminum Bahrain's $340 million IPO, resulting in $14.6 million in GDRs listed on the London Stock Exchange in December 2010, represented the opening up of the Middle East market, Gallagher says. J.P. Morgan is the depositary for this program as well.

Investors will continue to be attracted to emerging markets in 2011, and the Bric countries might be considered as an alternative to Western Europe, Gallagher adds. 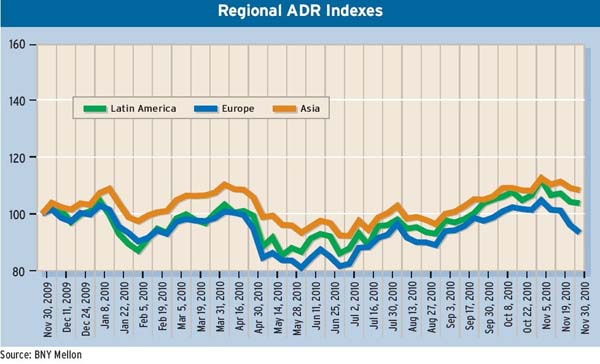