New-issuance volume in the US high-yield market rose sharply in November, led by a $4 billion, two-part offering from Sprint Nextel, the third-largest US mobile network operator. 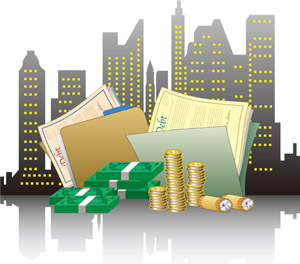 The Kansas company placed $3 billion of seven-year notes and $1 billion of 10-year notes, helping to improve its liquidity position. Sprint Nextel will use most of the proceeds to replace maturing debt, but it may use some of the funds to help Clearwire, its WiMax network partner, to complete its 4G network. Sprint owns a 54% stake in Clearwire.

Sprint’s benchmark-size debt issuance takes a material step toward reducing the company’s refinancing risk, according to Fitch Ratings. Nevertheless, Clearwire’s weak and uncertain liquidity position, including funding for its LTE (long-term evolution) network for high-speed data, remains a significant concern, Fitch says. “Any further agreement with Clearwire for 4G spectrum and capacity that would require material cash contributions by Sprint Nextel for a joint LTE network build outside of current capital spending expectations would likely result in a ratings downgrade,” the rating agency says.

Total US high-yield new issuance in November was just over $20.7 billion, according to Montpelier, Vermont–based KDP Investment Advisors. That was up from about $7.9 billion in October and $6.4 billion in September.

The energy sector accounted for many of the largest new high-yield issues in November, including Peabody Energy’s two-part private placement totaling $3.1 billion. The Missouri company planned to use some of the proceeds to fund its $5 billion acquisition of Macarthur Coal, based in Brisbane, Australia. Peabody is the world’s largest private-sector coal mining company.WPX Energy, a subsidiary of Williams Companies in Oklahoma, placed a two-part offering of senior notes totaling $1.5 billion. WPX will retain $500 million of proceeds from the offering and distribute the remainder to Williams.

Houston-based Plains Exploration & Production issued $1 billion of senior notes due in 2022 in the public market to repay outstanding amounts under the company’s senior revolving credit facility.

Plains Exploration says it intends to use future borrowings under the facility, together with cash on hand and cash received from the sale of assets, to fund tender offers for outstanding debt and for general corporate purposes. Linn Energy, also based in Houston, agreed to buy oil and gas properties in Texas and Oklahoma from Plains Exploration for $600 million.

The European sovereign debt crisis will continue to hang like a dark cloud over the corporate debt markets worldwide in 2012, but as the year progresses, the strong balance sheets and profitability of companies will shine through, analysts say.

Prospects for household and government debt look gloomy for the next two or three years at least, whereas prospects for companies’ profitability have improved markedly with cash balances and earnings up sharply, says Trevor Williams, chief economist at Lloyds Bank Corporate Markets in London.

While corporate bond yields have had a roller coaster ride since the financial crisis started in 2007, they have fallen dramatically in recent months, Williams says. “The crucial difference between the corporate sector at the aggregate level and some of the other sectors in the economy is that firms have cut debt levels more deeply and profits are rising quite sharply,” he says.

Companies have made great strides in adjusting their balance sheets to reduce gearing or leverage, according to Williams. “Interestingly, this is the case for the US, the UK and the eurozone,” he says.

Yields on the highest-rated companies have fallen below those of many top-rated sovereigns, which has prompted some to call triple-A-rated corporate bonds the new ‘risk-free’ rate, according to Williams. “As government borrowing continues to rise in future years, the focus on top-rated companies’ credit as the best measure of the lowest risk of credit default could increase rather than decrease,” he notes.

Over the course of 2012, the market volatility driven by the European sovereign debt crisis should fade—although not disappear—says Jeffrey Meli, head of global credit strategy at Barclays Capital in New York. Spreads of corporates to treasuries are likely to reflect more closely the strong state of corporate fundamentals in 2012, he says. 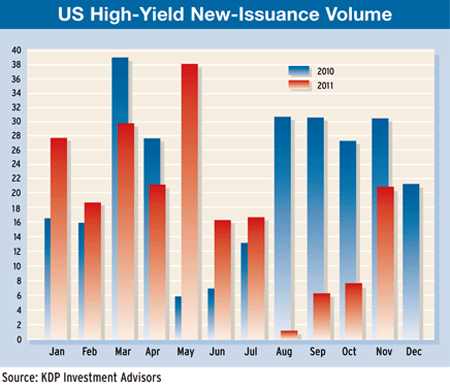 “This leads us to expect modest upside in most of the credit market, as the significant systemic risk premium priced into credit globally decreases,” Meli says. Nevertheless, there is the real possibility of a systemic shock emanating from Europe, which would cause dramatically wider spreads across regions, he adds. And even if the sovereign debt situation stabilizes, low liquidity and high volatility are likely to result in higher equilibrium spreads, Meli says.

One of the key themes in 2011 was the need for liquidity, according to Meli. “The institutions that have underperformed—sovereigns and European banks—have substantial upcoming redemptions and need access to the financing markets,” he says.

In the US, brokers and other institutions with short-term funding models have not performed as well as the large banks, which continue to raise deposits and have limited need to issue securities, Meli says. “Even more removed from liquidity risk are industrials, which at a macro level have termed out maturities and have healthy balance sheets with stockpiles of cash,” he says.

Liquidity in the secondary markets has become a concern for investors as well, Meli adds, which may be exacerbated by the implementation of regulatory reforms from Basel III and Dodd-Frank that may cause more violent price movements during deleveraging.

Dealer holdings of corporate bonds have fallen dramatically, and dealers now hold a smaller percentage of the corporate market than at any time in the past decade, Meli notes. Mutual funds, which typically require daily liquidity, have become a much larger portion of the credit markets. Basel III significantly increases the risk-weighted assets associated with dealer balance sheets, thus making holding inventory more costly, Meli says. Uncertainty about the implications of the limitations on proprietary trading included in the Volcker Rule have also led dealers to reduce inventories, he says. 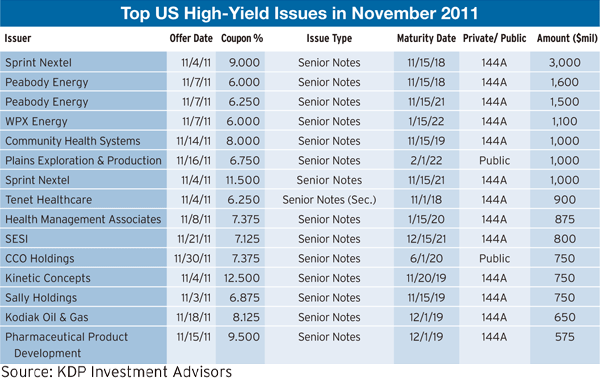