New China Life Insurance raised $1.9 billion in an initial public offering in Hong Kong and Shanghai in December, but it was forced to price the issue at the bottom of an expected range, as investor appetite in Asia for IPOs appeared to be waning.

New China Life, which was 15% owned by Swiss insurer Zurich Financial, raised about $1.3 billion in Hong Kong and $580 million in Shanghai. The Swiss insurer’s stake fell to 12.5% after the offering.

BNP Paribas, China International Capital, Deutsche Bank, Goldman Sachs, HSBC and UBS were among the banks that arranged the IPO for the state-backed company. Bank of America Merrill Lynch and China Merchants Securities were joint bookrunners.

While Asian issuers are still expected to dominate IPO activity in 2012, investor sentiment is weakening following two years of declines in China’s stock market and continued worries about the potential fallout from the eurozone’s debt problems.

New China Life, the nation’s third-largest insurer by premium volume, was seeking as much as $2.3 billion in its IPO, but it received orders for only 60% of the shares offered to retail investors in Hong Kong.

The share prices of China’s leading insurers were down nearly 33% for the year-to-date at the time of the sale, reflecting a slowdown in policy sales.

As Global Finance went to press, Chow Tai Fook, the world’s largest jewelry retailer, was preparing to price its IPO for up to $2.8 billion. If successful, the offering would be Hong Kong’s biggest IPO of 2011, topping Prada’s $2.5 billion IPO last June.

Baoxin Auto, a BMW dealer in China, raised $414 million in an initial public offering in Hong Kong that was priced at the bottom of an expected range.

Equity markets worldwide will be hostage to the actions of politicians in 2012, with little potential for gains, according to a forecast by the global equity research unit at HSBC. It remains to be seen if corporate earnings can grow in the face of an uncertain economic environment, HSBC says.

Slower growth in China may not be a disaster, as long as it is accompanied by lower inflation, the bank says. “China [and most other emerging economies] have significant room to ease [monetary] policy and add stimulus if growth does slow further,” HSBC says.

In the US market, Zynga, the leading social game developer for Facebook, was expected to raise as much as $1 billion, including the overallotment option, in its December IPO. That would make it the biggest Internet IPO since Google went public in 2004.

BNY Mellon announced a sponsored ADR program in the over-the-counter market for UK-based Essar Energy, which is focused on India’s power and oil and gas industries.

Deutsche Bank was appointed as depository bank for the sponsored American depositary receipt program of Urbi, Desarrollos Urbanos, a leading housing developer in Mexico, which specializes in developments for low-income families. The German bank also was selected as depository for the ADR program of African Rainbow Minerals, a South African mining and minerals company with projects in iron ore, coal, nickel and copper. 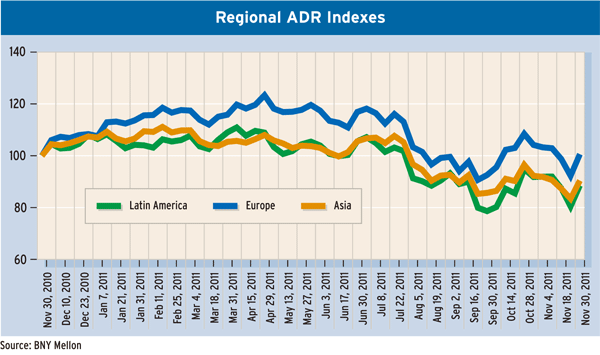