Anglo American, one of the world’s largest mining companies, gained a long-coveted majority stake in diamond mining company De Beers, in one of two M&A deals that the British firm was involved in during November, each valued at $5 billion or more.

In the first deal, Anglo American purchased a 40% stake in De Beers held by the Oppenheimer family for £3.2 billion ($5 billion). The deal would boost Anglo American’s interest to as much as 85% of De Beers, depending on whether, and by how much, the Botswana government increases its holding. It currently holds 15% of the company.

Anglo American’s purchase of the Oppenheimer family’s remaining stake in De Beers came at a time when demand for diamonds and other precious metals is growing in India and China, as well as the Middle East and other emerging markets—on the back of expanding middle classes with an appetite for luxury goods. Demand from emerging markets for copper and other metals is also expected to grow sharply in the next decade.

In the second transaction Anglo American—led by chief executive Cynthia Carroll—ruffled feathers in Chile when the company’s copper mining unit preemptively sold a 24.5% stake to Japanese trading house Mitsubishi for about $5.4 billion. The move blocked Chile’s state-owned Codelco copper company from exercising an option to acquire a 49% stake in the subsidiary, known as Anglo American Sur (AAS), for about $6.5 billion.

Codelco CEO Diego Hernandez says Anglo American is jeopardizing the future of its investments in Chile, where the UK company has operated since 1980 and has more than 10,000 employees. At Codelco’s request, a Chilean court issued an injunction blocking Anglo American from selling more stakes in AAS.

The company said it was planning to file additional lawsuits in the case. It added that it would go ahead with its plans to acquire the 49% stake in AAS. Codelco’s option is restricted to available shares beyond the 51% owned by Anglo American, according to Carroll. The option was acquired in a Chilean government

contract with Exxon Mobil in 1978.

Russia’s biggest steelmaker Severstal announced a planned exchange offer on November 30, 2011, to spin off its Amsterdam-based Nord Gold unit ahead of a potential London listing of global depositary shares in about six months. Severstal is 82% owned by Alexei Mordashov, Russia’s second-richest billionaire. Nord Gold has been buying mines in West Africa and Kazakhstan, and its output now rivals that of Russian peer Polymetal International, which recently became the first Russian-founded company to secure a premium listing on the main board of the London Stock Exchange. Polymetal raised $780 million in a share sale and now must purchase a total of 16.7% of the shares in its Russian unit in a mandatory tender offer to complete its switch from Moscow to London.

Polyus Gold, another Russian miner seeking a full listing in London, was forced to postpone its plans when a foreign investment commission headed by Russian prime minister Vladimir Putin said it did not have enough information to approve the move.

The biggest M&A transaction in November was in the pharmaceuticals industry. Gilead Sciences, a biotechnology company based in California, agreed to pay about $10.2 billion for drug developer Pharmasset, which has no products yet on the market but which has begun late-stage testing of a potential hepatitis C treatment.

The drug now labeled PSI-7977 could become a big seller, if it passes clinical testing and receives Food and Drug Administration approval, because it is easy to administer. Gilead Sciences also is developing some of its own hepatitis C treatments, some of which could be used in combination with PSI-7977. 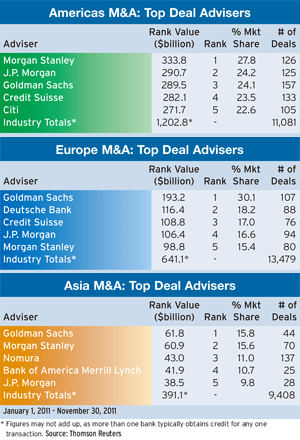 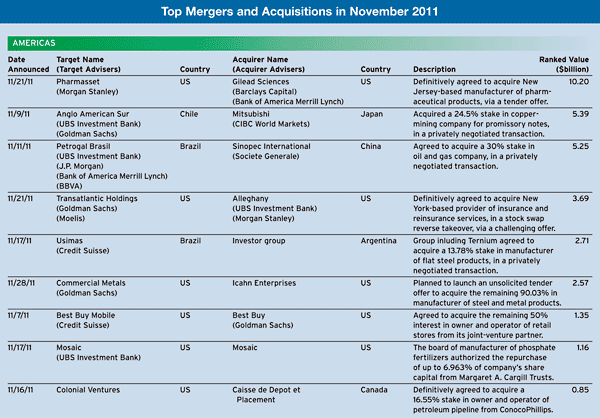