Commodity producers are turning to specialized banks that are willing to take multiple layers of risk in private deals. 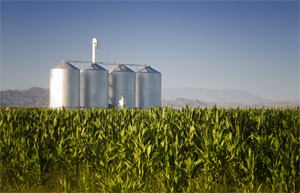 Great ideas are born at times like these. Prices for all commodities—agricultural, mineral, metal and energy—have been swaying in increasingly unpredictable patterns for more than four years now. Though they are settling down from historic highs, they are still high enough that many producers can finance their own production needs. Yet prices are also volatile enough to challenge producers’ ability to plan ahead.

The result is a sort of financial petri dish where rare opportunities are sprouting up for a cohort of relatively small, cutting-edge banks that are willing to take on the complicated risks that come along with such opportunities. Led by the likes of Macquarie Group, BMO Capital Markets of Canada and Standard Bank of South Africa, these lesser-known institutions grew up alongside mining and energy companies with whom they built financial partnerships over the decades, and they are now branching into other commodities—such as agriculture. They are insinuating themselves deeply into the financial and physical supply chain of producers, becoming indispensable partners—and making solid profits in the process.

The ethanol industry is a prime example of how banks are working their way deep into supply chains. Extracted from corn, ethanol is blended with gasoline for use in automobiles. The ethanol market has exploded, thanks to a federal mandate calling for the US to roughly triple the available supply of renewable-energy transportation fuel by 2022.

Financial institutions that are aggressive in the ethanol space—such as Macquarie—will often engage producers on a number of different levels. They will issue loans to ethanol producers, acquire direct equity stakes in them, sell producers the natural gas that is used as fuel in the extraction process and also purchase the ethanol and other by-products from the producers.

As if that weren’t enough, they will also sell producers over-the-counter derivatives that guarantee them a margin between the price of natural gas, which is their input cost, and the price of ethanol going forward.

This trend of deeper bank involvement in commodity producers’ financial supply chains is not occurring just in the ethanol industry but also in other agribusinesses, such as oilseed—the economics of which are similar to ethanol.

What the banks at the forefront of this new wave of finance have in common is that they hail from smaller countries that managed to avoid the brunt of the financial crisis of 2008 and the eurozone’s current sovereign debt crisis. What distinguishes them from their Wall Street peers is the entrepreneurial spirit with which they present themselves as partners to commodity producers who are eager to offload some of their market risk.

They are quick to depart from the confines of traditional bank products. For example, take the credit facility that Kinergy Marketing, a subsidiary of Pacific Ethanol, received from Wells Fargo Capital Finance. Because of the deep relationship between the ethanol producer and its bank, Kinergy increased the facility to $30 million from $20 million last spring without changing the maturity date—December 31, 2013.

"We are aware of, and prepared for, the inevitable price cyclicality that comes with commodities. Many of these projects are difficult, and they rarely go according to plan"

These non-traditional banks are much more involved in the financial decision-making of their commodities clients. For example, traditional lenders may cap the use of derivatives by a specific borrower or within a specific commodity in order to manage their own exposure. But this approach can leave the producer exposed if prices for inputs like natural gas or corn rise at the same time that prices for products like ethanol start declining. Even if outputs are already hedged, producers may end up watching helplessly while their cash flies out the door to meet margin calls—and their banks call in their loans. Such concerns are driving producers into the arms of smaller, more innovative banks.

“We are aware of, and prepared for, the inevitable price cyclicality that comes with commodities,” explains Walter Pye, senior managing director of fixed income, currencies and commodities for the Americas at Macquarie. “Many of these projects are difficult, and they rarely go according to plan. Rather than cutting and running at the first sign of difficulty, we often are proactive in helping our clients find workable solutions.”

In some ways, Macquarie and its ilk are acting like trading companies in that they have the ability to trade in commodities. The difference is that, as financial institutions, they are operating with the liquidity of a strong balance sheet and with the flexibility to offer various forms of financing that trading companies simply can’t. Some banks are partnering with trading companies to have the best of both worlds—industry expertise and a strong balance sheet. Macquarie, for example, has a joint venture with US firm Lansing Trade Group, which is active in emerging markets.

"When you have a negative real return after inflation and you erode confidence in the fiat currency—in other words, the dollar, the euro or the renminbi—there’s a tendency for commodities to become a substitute store-of-value money, and this is happening [now]"

Other banks restrict their commodity derivatives to oil, gas and metals in order to steer around the controversy over rising food prices and world hunger. In the Middle East and North Africa, food price riots contributed to the overthrow of the governments of Egypt and Tunisia in 2011. HSBC, which is quite active in those markets, is using its regional derivatives business to grow its trade finance business with state-owned oil companies, refineries and traders.

HSBC has gained an edge over competitors with a unique approach to financing in the oil and gas industry. While some other firms are refusing to lend to companies in the industry unless they are hedged against fluctuations in oil prices, HSBC offers these companies a choice: better terms on trade finance—if they are hedged—or worse terms on so-called clean loans that are not hedged. Of course, HSBC offers to sell its clients oil and gas derivatives in a package with these loans—along with other services that the bank’s relationship managers try to bundle together, such as cash management and foreign exchange. Like Macquarie, HSBC purchases equity stakes in some of its client companies to help finance their operations.

One reason these banks are becoming so innovative in private deals with their clients is that, with commodity prices so high, many commodity-oriented companies no longer see a need to raise capital on the public debt or equity markets. Even before political turmoil in the Middle East and North Africa drove oil above $100 a barrel and crop failures drove up prices for cotton, wheat and other agricultural commodities in 2010 and early 2011, capital had been pouring into commodities on an unprecedented scale since the global stock market crash of 2008 and Europe’s subsequent sovereign debt crisis.

While corporate consumers are using futures and options to lock in low prices for commodities—from airlines buying jet fuel to jeans manufacturers buying cotton—financial investors have been using them to seek higher returns on capital than can be had on traditional debt and equity markets, given current low interest rates.

“When you have a negative real return after inflation and you erode confidence in the fiat currency—in other words, the dollar, the euro or the renminbi—there’s a tendency for commodities to become a substitute store-of-value money, and this is happening [now],” says Richard Hoey, chief economist at BNY Mellon.

As a result, in the short span of just a couple of years, investment banks went from breaking all-time records in raising capital for commodity-related companies on the pubic debt and equity markets to seeing stark reductions in capital raised. From January 1 to November 23, 2011, agribusiness, chemicals, mining, metals, forestry, power utilities and petroleum companies worldwide issued only $469.46 billion in public debt, down 28% from a peak of $655.66 billion in 2009, according to data from Dealogic. In public equity markets, they raised only $167.77 billion over the same period, down 28% from a peak of $233.93 billion in 2010. Commodities-related M&A has dropped 33% from a peak of $1.16 trillion in 2007 to $781.18 billion to November 23, 2011.

Small wonder banks are looking at relatively small, innovative deals for returns—and keeping them in the private domain, where it’s easier to bunch different types of financing together for a single client. “As a package it becomes more attractive if we have multiple touch points with a client,” says Praveen Gupta, regional head of sales for HSBC in Dubai. Diving deeper into the financial supply chain—and creating stronger bonds with corporate clients along the way—is the model of choice for these opportunistic banks.