Regulation is making it harder for banks to lend to infrastructure projects. New types and sources of funding will be needed to handle a wave of infrastructure development now under way—particularly in the emerging markets, where demand is greatest. 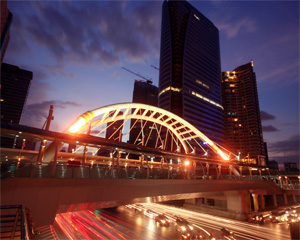 Project financings for infrastructure have always had their ardent admirers. Noncyclical, reliable and perceived as virtuous, the performance of infrastructure project ratings underlines the sector’s versatility in even the toughest of markets. But the one-size-fits-all days of bank-driven infrastructure finance are long gone, and new projects will need to use alternative forms—and sources—of funding.

Demand for infrastructure in emerging markets will triple to $1 trillion annually until 2030, according to a recent RBS report— The Roots of Growth: Projecting EM Infrastructure Demand to 2030 . But at a time of a dramatically rising demand, banks are finding it increasingly difficult to make the loans that have been the traditional lifeblood of the sector. This could create a funding deficit and drive up prices.

Many banks that were active in the infrastructure space, particularly in Europe, where the currency crisis is proving a considerable distraction, are therefore trying to get long-tenored infrastructure exposure off their books—although so far with limited success—and they certainly are not looking to add to such long-dated exposures.

This reduction of bank participation leaves a sizable vacuum in the infrastructure financing space. There is already evidence that projects are stalling or collapsing altogether. The Gebze-to-Izmir toll road project in Turkey, a $10 billion joint construction effort by Turkey and Italy, is making glacial progress because of financing difficulties, and it is not alone.

As a result, there will be no one-size-fits-all bank financing option for infrastructure projects going forward—particularly in the emerging markets. Governments with cash to spare, like China and parts of the Middle East, often prefer to finance infrastructure projects directly, allowing them to maintain control. Where private sector involvement is sought, there are a number of issues to be addressed in creating financing packages. Political sensitivities often complicate the process: Projects are often heavily regulated, adding another layer of risk. If regulations change during the construction phase, profitability can be undermined. Cost overruns and unforeseen technical obstacles are also quite common.

“Bank funding could still be available to many projects but with shorter durations of five-to-seven years or even less,” says Stephan Tinnefeld, director of infrastructure at HSBC’s global banking division. “But this creates a problem for investors such as construction companies, as many projects are structured as concessions with durations of 20 years or more.”

As a result, there may be a move toward greater use of varied solution sets to match the risk profiles of diverse investors. “These projects can be sliced and diced and repackaged, because different parts of the project have different kinds of risk,” says Hasnen Varawalla, co-chairman of the Macquarie Renaissance Infrastructure Fund. “The early stages of a project carry equity risk, and there will be a particular market for that. Then you have the construction phase, which requires a longer duration but has different risks.” That could pave the way for governments to take on the riskier elements of a project but leave the more stable part to private investors, he says.

Not only do different countries with different risk profiles point to different financing packages, but financing a road is very different from financing a power plant. Securitization is still of interest for toll roads because they generate a predictable stream of revenue based on traffic levels, but such structures are less applicable for other infrastructure projects, notes Varawalla. Loans are easier to arrange for power plants or airports, where there is equipment that can be used as collateral, which is not the case with a road, he adds.

The equity markets are unlikely to offer a practical solution directly because the amounts of money typically needed are too great, says Tinnefeld. The supranational banks have been instrumental in filling this void, and some analysts believe they are destined to play an even greater role in the future of infrastructure financing (see sidebar).

The neatest solution is for projects to be funded in the capital markets. The long duration of financing needed for infrastructure and the predictability of cash flows make it a very interesting proposition for pension funds and other institutional investors from an asset-liability management perspective, says Varawalla. Although project bonds have long been in use, at a time when long-duration loans are harder to come by and more expensive than in recent years, they may become ever more of interest to project banks and sponsors.

The capital markets funding route is being pushed by some governments, too. Abu Dhabi, for example, which can comfortably finance its own projects with its vast oil wealth, is seeking to diversify the funding of its projects in the bank market and with bonds, says Redican.

However, the number of project ratings brought by S&P has slowed since 2008, suggesting the use of debt capital markets is actually declining. Moreover, the numbers of rated infrastructure projects in the emerging markets regions is almost inversely correlated with the findings of RBS relating to the overall expenditure on such projects, implying the most active regions are not using DCM. According to S&P, 24% of infrastructure ratings came from EMEA, with 13% from Latin America and only 6% from Asia.

Between 1991 and 2011, just 10 Asian countries invested two-thirds—$5.1 trillion—of the total emerging markets infrastructure spending, according to RBS. China, dominated by government funding, lead investment, with $2.9 trillion. India and Korea were next, with $1.3 trillion and $300 billion respectively. Indian—and Indonesian—power projects dominated overall activity, RBS said. “There is also a healthy pipeline on the back of public-private partnership (PPP) initiatives that is building up in the Philippines and Vietnam,” it added.

As far as expected investment goes, Asia will account for the lion’s share of emerging markets infrastructure demand over the next two decades, with around $15.8 trillion in spending needs, according to the RBS report. Emerging Europe, with $1.3 trillion; Latin America, with $1.2 trillion; Africa, with $0.7 trillion; and the Middle East, with $0.2 trillion, will also see activity. Projects are likely to be heavily skewed toward power—followed by roads, mobile telecom, fixed phone lines and rail, RBS added.

The Europe 2020 Project Bond Initiative may create a blueprint for supranational participation in infrastructure financing.

The European Investment Bank and the European Bank for Reconstruction and Development, to name just two supranational banks, have been increasingly active in infrastructure financing in recent months, with the EIB in particular saving some notable transactions from collapsing, according to Mike Redican, managing director in global credit structuring at Deutsche Bank. “This has been a positive development, with the EIB looking to step in where monoline [insurers] have vacated with the Europe 2020 Project Bond structure.”

The idea of the 2020 initiative is for the EIB to use its Triple-A rating to act as an insurer on European project bonds. It would issue first-loss and other guarantees to enhance credit structures to give them a broader appeal to investors.

This initiative, says Redican, will clear the way for increased capital markets involvement in project financing. “There is a lot of money sitting on the sidelines that investors would love to put into infrastructure projects but can’t because of the sovereign risk,” he says.

It could create a blueprint for other supranationals to provide similar guarantees, or loans, themselves. Investors that are wary of investing in emerging markets with high sovereign risk may be willing to take a look at project bonds guaranteed by—or issued by—the EIB, the EBRD, the World Bank or the Asian or African Development Bank, for example. Although banks will find it increasingly difficult to make loans with 25-year durations, such loans are not an issue for development banks.

“In many instances the supranational banks are the key to all this,” says Stephan Tinnefeld, director of infrastructure at HSBC’s global banking division. “Their presence is absolutely crucial, not only in providing financing directly themselves, but just by being there—which provides confidence to other banks to follow.”

However, the downside is the 2020 Project Bond scheme will not go live until 2014, and there is a capacity issue. For such an initiative to be used broadly, the supranationals would need to be regularly recapitalized.

Redican says: “It is surely better to recapitalize supranationals than the banks under these circumstances. Many of these infrastructure projects are a real priority.”