THE BIG GET BIGGER

The biggest FX banks are increasing their share of a shrinking market, amid low volatility and despite a speed bump for high-frequency traders. 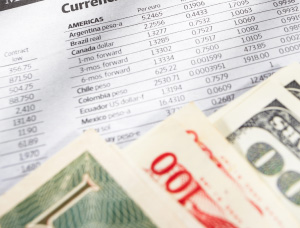 As global interest rates converge at a low level and the carry trade dries up, volumes are declining in the foreign exchange market, the world’s biggest trading market. It no longer pays for banks and investors to borrow in currencies with low interest rates to invest in higher-yielding currencies, because the rate differences aren’t big enough to offset the currency risk.

Meanwhile, participation by high-frequency traders has declined. Part of this reflects improved technology at the banks, which decreases arbitrage opportunities. In addition, new rules on decimal pricing have made it more difficult to take advantage of small price changes in the market.

Some platforms have abandoned decimalization, which enabled market participants to trade in finer price increments. In September 2012, EBS became the first major platform to move away from decimal pricing “to further promote and reward genuine liquidity on the platform and discourage disruptive behavior.” Gil Mandelzis, CEO of EBS, says: “The transition of the public FX markets into ever faster, smaller-size trading environments has proven to be disruptive to genuine liquidity and takes away from the fundamental purpose for which these markets were created to begin with.”

In addition, new regulations have reduced the ability of some FX market participants to continue to operate. Nondeliverable forwards and currency options are migrating to electronic platforms and centralized clearing. The Volcker Rule will limit proprietary trading by banks, which are shutting down their “prop” trading desks and dealing without a book.

Meanwhile, FX market volatility has hit multiyear lows. “Usually, we would expect low volatility to occur in a stable and predictable environment governed by strong trends,” according to a report by analysts at Sweden’s SEB. “However, currently it is difficult to argue that markets are highly predictable. Instead, financial asset prices in general are being manipulated by central bank policy and are highly sensitive to extremely hard-to-forecast political decisions.”

In our annual World’s Best Foreign Exchange Providers awards, Global Finance has identified the best foreign exchange banks—the ones that major corporations, in particular, should choose to handle their currency hedging and transaction needs. We chose the leading foreign exchange banks in 97 countries or regions, as well as the best online trading systems; the best firm for foreign exchange research; and winners for fundamental research, technical analysis, currency forecasts, and strategy and hedging. 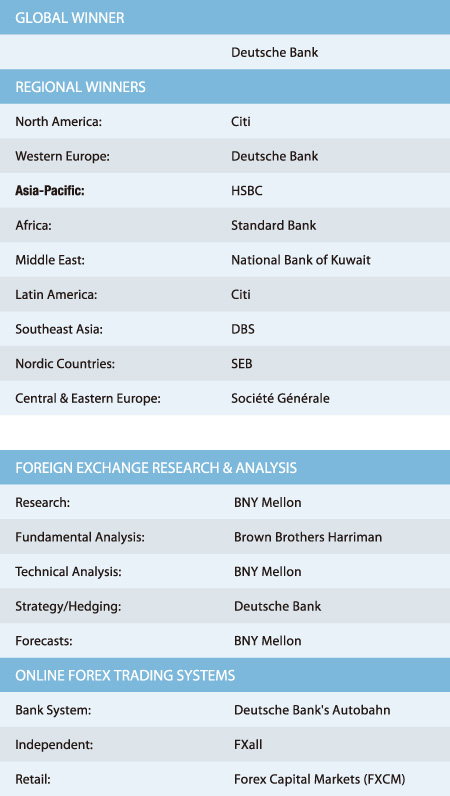