Despite its wealth and strong banking sector, Kuwait is being held back by its failure to invest internally and diversify away from oil. 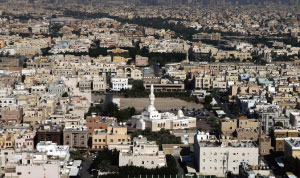 The demonstrations that preceded—and followed—Kuwait’s parliamentary elections on December 1 seemed to suggest this wealthy emirate might be the next to experience its own Arab-Spring-like uprising. Appearances can deceive, however.

“The fact [that] the opposition pulled back, that no one was calling for serious changes to the status quo or criticizing the emir all demonstrate that Kuwait is very unlikely to go down the route of Bahrain [with a persistent campaign of social unrest and demonstrations, followed by a vicious crackdown by police], for example,” says Kristian Ulrichsen, a research fellow at the London School of Economics.

However, the elections seem to have made what was already a complex, highly charged situation even more intractable. Boycotted by the opposition because of prior changes to the election law it says are unfair and unconstitutional, the election had a turnout of around 40%. This compares to 60% in February’s elections, which saw major gains by the Islamist opposition in particular but which were subsequently overturned by Kuwait’s constitutional court.

The opposition says the new parliament has no legitimacy and that it will continue to demonstrate for reforms—including a prime minister chosen by merit rather than family, and proper political parties. The government is stressing the need to get on with business, with the result being a continuing sense of crisis.

It really shouldn’t be like this. Kuwait is one of the world’s wealthiest countries, with some 10% of global oil reserves; the per capita GDP in purchasing power parity terms of its 2.8 million inhabitants is over $42,000. Encouragingly, the Shia population is well integrated and in December won 17 out of the 50 parliamentary seats; women also hold seats in the new parliament.

And Kuwait has an economic outlook that—in these days of struggling recovery and the endless eurozone crisis—makes most countries envious. GDP is expected to grow by about 5.5% in 2012, and fiscal 2011–2012 produced a record surplus of $47 billion on revenues of $108 billion, equivalent to an astonishing 27% of GDP, reflecting much lower-than-anticipated spending and record revenues from oil.

“In the short term, anyway, Kuwait—like the Gulf generally—looks very well placed to weather the further deterioration we expect in the global economy, even if oil prices slide a little,” says Neil Shearing, head of emerging markets research at Capital Economics, a London-based consultancy. He argues that oil prices would have to drop below $60 a barrel for a prolonged period to have any significant negative impact, and he expects the Gulf region to grow 3.5% next year, with Kuwait’s GDP growing a little less than that.

Indeed, while economies in Europe and elsewhere have seen a deterioration in most key variables, Kuwait seems to have gone from strength to strength. Compared with 2008, external debt has dropped to $22 billion from $53 billion, foreign exchange reserves have risen from $16 billion to $25 billion, and most dramatically of all, the assets of Kuwait’s sovereign wealth fund—the Kuwait Investment Authority—have increased from $213 billion to $296 billion. Unsurprisingly, the KIA—once one of the oldest and most conservative of the Gulf’s SWFs, which in November celebrated its 60th anniversary—has been making numerous investments in Turkey and moving into the real estate market in various European cities, notably London.

However, the modest liberalization that became more pronounced after sheikh Sabah al-Ahmed al-Sabah took power in 2006 has ironically undermined economic progress. Kuwait is a constitutional monarchy, with its parliament having real power to block government decisions, but this has held back the much-needed investment and diversification many say is key to long-term stability. Indeed, the clue lies in the country’s vast budget surplus—reflecting oil earnings but also the failure to invest—and in the country’s physical appearance.

Downtown Kuwait City looks shoddy compared with most of its Gulf rivals, and its airport is a shadow of those in Dubai, Abu Dhabi or Doha, with facilities that might have looked impressive in the 1970s or 1980s but which now look positively antique.

The same lack of progress has affected Kuwait Airways. Established in 1954 and once the pride of the Gulf, the airline has become, as a result of underinvestment and big losses, an also-ran in the region’s ongoing emergence as a premier global airline hub. The influential website, AirlineEquality.com, gives it three stars for product and service quality compared with the four or five stars given to Emirates, Etihad and Qatar Airways. Recent efforts to privatize it have foundered, although the airline’s chief, Sami al-Nusif, now says it could be sold within a year once the ongoing restructuring plan—which includes investment in equipment, technology and new destinations—is complete. The failure to modernize Kuwait Airways seems emblematic of the wider problem afflicting the country.

“The current government is promising to take a more active approach, which [should] translate into increased spending. For banks that means the return of growth in business credit and a stronger improvement in the bottom line”

“Kuwait’s unresolved political problems—with a crisis that has now been going on for some six years within a system that remains basically unchanged since independence in 1961—have significantly impacted on economic development and the business environment,” says Ulrichsen at the London School of Economics. He and others say the opposition has effectively blocked the government from properly implementing the five-year (2010–2014) development plan under which some $125 billion in 1,100 new projects were envisaged, including much-needed new infrastructure. 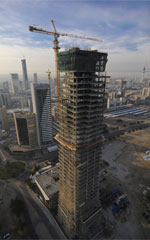 “The fact that there is a huge pent-up demand for new roads and new housing projects and also that the money is clearly there intensifies the frustration,” Ulrichsen says.

After its visit in April, the IMF highlighted the lack of diversification and Kuwait’s bloated public sector (the private sector contributes just 7% of GDP, while public-sector wages account for some 80% of oil revenues and the official public-sector retirement age is 55). It warned that although the fiscal stimulus initiated last year had helped recovery, “elements, such as the increase in wages in the state budget for the financial year (2012–2013) raised concern about public finances in the medium term ...  and management of public finances in the short term.”

Daniel Kaye, senior economist at NBK Bank, says that although the government has made some improvements to the business environment—including a new companies law and the development of a Capital Markets Authority (CMA) to boost securities market confidence—more aggressive pro-market reforms are still needed in privatization, competition, housing and the labor market.

Post-elections, what is the outlook for Kuwait? Some observers suggest the opposition may have overplayed its hand, particularly as in some regards, the new parliament is more inclusive than before and doesn’t have Islamists determined to block progress. If the authorities can meet some of the opposition’s demands—by, for example, promising more political reform further down the line—and restore a general sense of order and balance to the country, prospects look good, particularly if the new parliament opts to work with rather than block the government.

Michel Accad, CEO of Gulf Bank, the second-largest commercial/retail bank, suggests the priority must be getting the development plan back on track (spending is currently well below target, with just 62% of the planned $18.5 billion spent in year one and a similar amount in year two). He says that if it is properly implemented, it would encourage the non-oil economy and boost long-term growth potential to around 9% a year from the current 5%.

There are, however, lots of other plans, such as transforming Kuwait City into a regional financial hub to take on Dubai and Doha. “Necessary next steps include improving high-tech infrastructure, bedding down the new regulatory environment under the CMA and attracting more foreign investment … There may also be opportunities for Kuwait to cultivate niche areas such as wealth management, private banking or the financing of energy projects,” says NBK’s Kaye.

Certainly, Kuwait’s banks would be well positioned. Although the sector is in recovery mode from the 2008 downturn—profits during the first nine months have been mostly flat, and average ROE for reporting banks stood at 11% compared with a Gulf Cooperation Council average of 15% and a pre-2008 level of over 20%—things are on the upswing. Nonperforming loans to gross loans have been declining since 2009, when they reached a peak of 10.3%. They stood at 6.6% at the end of 2011, and are expected to fall still further by the end of 2012.

Accad stresses that the capital position of Kuwaiti banks is now very strong, with ratios averaging 17%, well over the minimum requirement of 12%. The growing strength of bank balance sheets, coupled with strong consumer lending and rising confidence, means the sector will be well placed to benefit if the country does finally move forward properly with its development plan.

“The current government is promising to take a more active approach, which [should] translate into increased spending. For banks that means the return of growth in business credit and a stronger improvement in the bottom line,” says Nemr Kanafani, a senior economist at NBK.

For Kuwait, it could mean an end to the political tensions that have stymied development and investment and prevented this country from realizing its true potential. “If the government and parliament could work together, Kuwait can achieve great things,” says Gulf Bank’s Accad.