Volatile commodities prices are poised to drive an M&A wave and are already changing how companies hedge against price swings. 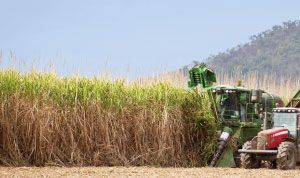 A storm is brewing in the global commodities markets. Perceptions of global risk are running so high that the forces that would make commodities prices volatile even under normal circumstances—from weather patterns to fluctuating demand in emerging markets—have conspired to make prices less predictable than ever. Less predictable, certainly, than any corporation is prepared to gamble on without protection.

Recent price spikes of this extent have not been seen in the past 50 years, according to Anjun Zhou, head of multi-asset research at Mellon Capital Management. Uncertainty has risen off the charts for a number of reasons. The first is fear over the health of the global economy. The second is that market participants are awaiting the outcome of crucial events that have the potential to drive prices for metals and agricultural commodities haywire—namely, a slowdown in China and the proposed merger of massive commodities outfits Xstrata and Glencore.

China’s rapid economic growth, which has sustained prices for industrial metals for the past two decades, is expected to slow to about 7% or 7.5% over the next few years from its former trend of 10%. And the impending $80 billion merger of mining and smelting giant Xstrata and commodities trading house Glencore International could trigger a wave of consolidation. Plus, in late November, the OECD warned that the global economy could contract in 2013, citing the risk of the US “fiscal cliff” and the even graver danger posed by Europe’s sovereign debt crisis.

The historic scale of such risks makes it harder than ever for companies that consume all sorts of commodities—from cotton to jet fuel—to forecast what their costs will be in the months ahead. More crucially, they face unprecedented difficulty in locking in prices over the next three-to-six months in the futures markets. This is partly because they can no longer predict the scenarios that will guide prices. In many cases, companies are under pressure to place bets on two equally plausible outcomes. “We get more on-off, binary kinds of decisions now that say, ‘Either we go off the cliff in the US or we don’t,’ or ‘Either the [eurozone] breaks up or it doesn’t,’” explains Bluford Putnam, chief economist of CME Group, the world’s largest commodities exchange, located in Chicago.

Corporations are looking for better ways to hedge against the risk that commodities prices will move against them. In the months ahead, Putnam expects companies and investors in general to use options more often than futures becuase futures contracts are obligatory; the holder of a futures contract must take delivery even if the price moves to a level that is not to the holder’s advantage. But an options contract, as its name suggests, is not obligatory; the holder pays a premium for the right to buy or sell at the contract’s strike price. According to Putnam, investing in two options contracts at the same time—say, one on a price rise and the other on a price fall—is the best defense in an unpredictable situation. Paying a broker for more than one options contract on a single commodity is not unlike paying an insurance company for a policy that you hope you’ll never need, he explains.

Industrial metals are among the trickiest commodities to predict now. China’s economic deceleration will have a long-lasting impact—not a cyclical one—on industrial metals, warns Colin Hamilton, senior metals analyst at Macquarie Group in London. China’s insatiable demand over the past 15 years provided a buffer that served to smooth out volatility that had previously plagued the metals markets, he explains. Now, and for the foreseeable future, it is unclear what will stabilize metal prices.

Another paradigm shift is occurring in agricultural commodities. Last year a severe drought hit the US Midwest. That dealt a big blow to grain crops, wiped out inventories in warehouses and drove grain prices up. “Now the littlest things, like even the threat of a drought or the threat of too much rain during a planting season, are enough to trigger further price increases, because you don’t have the comfort of knowing that there is enough supply in the warehouses to protect you,” says Kona Haque, an agricultural commodities analyst at Macquarie Group.

But at the same time, prices for sugar and cotton, which are produced in areas that were not affected by the drought, are falling to a point where growers have no incentive to produce, Haque notes. This is because farmers overplanted last year, hoping to take advantage of an increase in prices in 2009 and 2010. Now, thanks to oversupply, sugar prices are so low that mills in Brazil are acquiring one another and foreign investors are taking over some of them, she says.

More consolidation could occur this year among metal miners, smelters and trading companies in the metals and mining industries. “Everyone is waiting for the shakedown effect of the Glencore and Xstrata merger, which will probably drive a chain of events,” says Macquarie’s Hamilton. “They will have to divest some assets, and they will be looking to buy some more.”

“Now ... even the threat of a drought [is] enough to trigger further [grain] price increases”

Some analysts say the rational course for textile manufacturers, ethanol plants, food companies, airlines and other corporations that are hypersensitive to commodities prices would be to search for merger partners with whom to share costs that are getting out of control. Others, however, are skeptical. According to Bruce Herring, group chief investment officer, equities, at Fidelity Investments, most CEOs are reluctant to risk a merger in times of great uncertainty, even though the opportunity exists for creating value with such deals.

It seems clear that in 2013 and beyond, commodities markets—and corporate responses to them—will continue to be volatile.