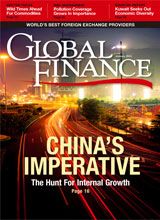 Over the last few weeks of 2012, when brokerage houses and investment banks were presenting their annual forecasts for the new year, there were timid signs of optimism. It will “not be as bad as expected,” their economists and strategists repeated during presentations. “Global economic growth is expected to pick up steam in the second half of the year, ultimately surprising on the upside,” claimed the economists of Bank of America Merrill Lynch.

Nevertheless, uncertainties remain. Will political wrangling over the 2013 budget take the United States over a fiscal cliff? Will the eurozone fracture over the prospect of unending debt bailouts? By contrast, there is consensus on the solid growth prospects of emerging markets, and of the larger economies among them.

Khiem Do, portfolio manager of the Asia Pacific Fund, describes Asia in general as “having cleaned up its act after ’98 and excessive borrowing” and says it is now “lending to the world.”

For China, growth forecasts are lower than a few years ago, and the jury is out on what will happen now that the country has new leadership. But the fear of a hard landing has diminished. And the debate is now focusing on the sustainability of growth. Economists at the BlackRock Investment Institute summarize it poetically: “China’s economy will fly—albeit at lower altitudes.”

In our cover story, we look beyond current growth patterns at the medium- and long-term trends that will affect the Chinese economy.

This month we also present a new feature on frontier markets. We’ll be exploring a new frontier-markets country each month as a regular feature. We are not looking for the countries that will be the next BRICs, but rather we choose to focus on economies that stand out in contrast to the global economy. Evaluating growing markets is part of our primary mission, and this column rounds out our coverage of new developing economies.