The yen took a nasty tumble last month, shaking the sleepy foreign exchange market out of a long slumber.

While the attention of market participants was focused on the European debt crisis and Greece’s ultimately successful attempt to get its third bailout, Japan’s election snuck up on the market.

Shinzo Abe, head of the Liberal Democratic Party, launched an aggressive campaign of rhetoric, suggesting that if he became the country’s next prime minister, as the polls at the time suggested was likely, he would force the Bank of Japan to ease policy drastically until deflation was defeated once and for all.

“The rhetoric of Shinzo Abe has been more successful in changing market sentiment toward the yen than the $100 billion-plus intervention in October-November 2011,” says Marc Chandler, global head of currency strategy at Brown Brothers Harriman. “That intervention drove the dollar up 5.5% against the yen. The dollar has risen 7.2% against the yen [in the week] since Abe began threatening to debase the currency.”

Speculators piled into short yen positions, Chandler says. “Real money also appears to be adjusting to the prospects of a weaker yen,” he says. The yen was the weakest of the major currencies going into the year-end period.

The new Japanese government will also have the power to appoint a new central bank governor in April (once the current governor’s term expires) and to appoint two deputies in March. This will give it significant sway over the future direction of monetary policy, according to currency strategists at Barclays Capital.

Monetary easing to achieve an inflation target of at least 2% will weigh on the yen, they say. In addition, looser fiscal policy, in particular a delay in raising the consumption tax, would put pressure on Japan’s fiscal position. “A further ratings downgrade might lead to increased selling of Japanese government bonds and capital outflows, which will weigh on the yen,” the Barclays analysts say.

Volatility in the FX market has decreased to the lowest level since prior to the financial crisis in 2008, according to a report by Stockholm-based SEB. Rate differentials between major currencies remain too narrow to be worth exploiting using the carry trade, given current political and economic uncertainties, the report says. However, if there were to be a more significant recovery in the global economy in 2013 supporting risk appetite, there could be a case for reconsidering the carry trade once again, the bank says.

The issue of low volatility in the FX market and the forces behind it was discussed at a panel in New York sponsored by Dow Jones last month. Jens Nordvig, head of fixed income research for the Americas, and global head of currency strategy at Nomura, says: “Implied volatility is low, but there are big macro developments happening in the global markets. No one has inflation concerns right now, but the situation can tip very quickly, with a 3% inflation handle possible by the end of 2013. An inflation spike could bring very big divergences in currencies.”

Most of the banks’ proprietary trading desks have shut down, Nordvig says. “This could lead to more erratic moves and ‘gappy’ trading.”

Vince Cignarella, currency strategist and columnist for DJ FX Trader, says: “Trading foreign exchange without a book is tricky because flows are very erratic. You have to adapt.”

Getting out of the low-volatility environment will depend on the pace of deleveraging, Cignarella says. “Low rates are an attempt by the central banks to keep calm,” he says.

Right now, the central banks are the only actors in the market, says Dan Dorrow, head of research at Faros Trading. There probably will be no inflation concerns in the G4 nations over the next two to three years, Dorrow says, but there are concerns in some emerging markets. “Russia won’t ease and Mexico is on hold,” he says. The G4—Brazil, Germany, India and Japan—are four countries that support each other’s bids for permanent seats on the United Nations Security Council.

The outlook is less positive for the euro area, as GDP growth will lag that of the US, Hafeez says. “Our FX forecasts reflect this dynamic, with a stable euro early in 2013 but weakness later,” he says. “We expect more consistent dollar strength against the yen over 2013.”

In a report on the investment outlook published by SEB, Hans Peterson, global head of investment strategy, and Lars Gunnar Aspman, global head of macro strategy at the bank, say: “Today’s calm market cannot be linked to unusually high predictability about where the economy is headed, but is instead the result of the unprecedented financial drama in recent years. This drama has caused financial market players to be exceptionally cautious and reduce their exposures to a minimum, which has curbed price movements considerably.”

The home countries of traditional reserve currencies are weighed down by domestic problems, whereas alternative currencies are backed by well-managed economies, the SEB report says. “Returns will be generated in places other than traditional industrial economies,” it says. “Capital has flowed out of these currencies and into smaller currencies, such as the Swedish krona and Norwegian krone, as well as the commodity currencies of Australia and Canada.”

The International Monetary Fund said in a recent report that it is considering breaking out data on the Australian and Canadian dollars separately in its report on the currency composition of official foreign exchange reserves. Dennis Gartman, editor and publisher of The Gartman Letter, says: “This is a quiet but important granting of the Fund’s imprimatur to these two currencies as ‘reservable’ assets, giving them the same effective status as the US dollar, the Japanese yen, the euro, the British pound and the Swiss franc, and it is the first such approval since 1999.”

What is noteworthy is what is not being considered, says Chandler of Brown Brothers Harriman. “Despite all the talk of ‘currency wars’ and the internationalization of the yuan [renminbi], the Chinese currency has made practically no headway as a reserve currency,” he says. 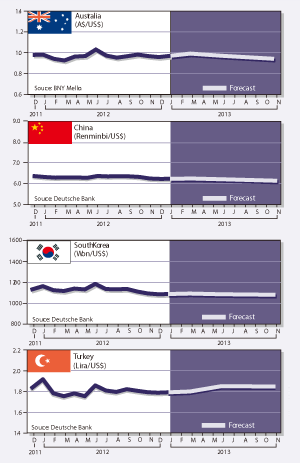