Bring On The New Russia

As investors query what will happen in Russia’s economy over the near term, the long-term outlook is improving as the business environment is liberalized.

Russia will be at the center of world attention in March as it hosts the Winter Olympics in Sochi. The Games are already anticipated to be the most expensive in history to run—$50 billion, or three times the cost of last year’s London Olympics—mainly because of the Soviet-style, nature-defying decision to base them in a predominantly summer resort on the Black Sea. Yet for most observers the big focus will be elsewhere.

The EU, which has strongly criticized Moscow’s bullying Ukraine to reject an EU Association Agreement in preference for closer economic ties with Russia and its Eurasian Union, will be hoping its Eastern Partnership strategy will survive Russian assertiveness. Washington, DC, will be looking at Russia’s focus on the Middle East, especially its new closeness to Egypt following the US decision to cool relations after the overthrow of the Morsi government last July. 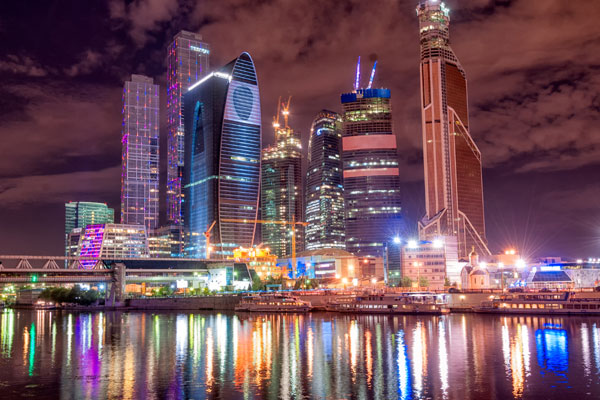 For investors and banks, however, the big question will be what is happening to Russia’s economy. Almost all forecasters have dropped their 2013 and 2014 projections, citing weak industrial output, weak consumer and external demand and low investment, the last of which has been a recurrent theme for Russia in recent years. Real GDP for 2013 is expected to have grown by around 1%—the weakest in four years. For next year 2.5% looks to be the best attainable, although if energy prices remain low, it could be closer to 2%.

“It’s not that Russia is doing badly, just that it could be doing so much better,” says Charlie Robertson, global chief economist at Renaissance Capital, admitting the country is way short of attaining the 5% to 6% annual growth rates that are the stated goal of president Putin.

The rest of the economic picture doesn’t look bad, especially for risk-averse investors seeking stability. Public debt levels are low, at around 12% of GDP (though so too are savings—at just 46% of GDP against 177% in China). Inflation is expected to hold steady at 5% to 6%. The budget is almost balanced, and the current account shows a 2% to 2.5% surplus, significantly less than in recent years. Current estimates suggest Russia has around $600 billion in foreign exchange and gold reserves.

Despite the generally encouraging picture, private money is pouring out of, rather than into, the country. Capital flight in 2013 is expected to top last year’s already-high $57 billion. And privatization isn’t really happening, despite Putin’s promises to the contrary: Although an IPO of Rostelecom is expected next year, key energy companies and banks are likely to stay in state hands. After Moscow cut the program for this year and next, it will raise just under $2 billion this year—only 14% of the original target—and $5.5 billion next. Nor is desperately needed pension reform taking place.

The real worry for all stakeholders is that Russia’s stagnation—compounded by policy inertia—is not a short-term phenomenon. Market participants received a shock on November 7 when the Economy ministry declared the country was in for a protracted period of lower-than-expected growth, with 2% to 2.5% to be the norm for the foreseeable future, because of declining investment and exports.

The reality is that Russia today is at a crossroads. It has exhausted its previous growth model, based on the exploitation of natural resources and underutilized Soviet-era capacity, but has yet to find a new one.

“Low investment is a big part of this growth story. A financial stimulus will have only a limited effect unless deep structural problems are addressed,” says Alexander Plekhanov, Russia senior economist at the European Bank for Reconstruction and Development (EBRD).

As any company that has ever done business in Russia knows, key issues that must be addressed include an overdependence on energy, poor infrastructure, general underinvestment, corruption and excessive bureaucracy—particularly at the local and regional level—and weak institutions, especially the judiciary. Putin’s recent support for a new bill that empowers the prosecution of tax crimes without any oversight from the tax authorities hardly encourages those who have doubts about the fairness of the system.

However, in the 2014 World Bank Doing Business survey Russia jumped 20 places in the list, to 92nd out of 189 countries, mainly by reducing the amount of time needed to start a business, reducing the amount of permits required and simplifying electricity connection, demonstrating that Russian authorities are serious about meeting Putin’s goal of getting the country into the top 20 on the ranking by 2018. Russia is now the leading BRIC country on the Doing Business ranking.

There are also signs Russia has recognized the need for infrastructure investment. Three major transport projects were announced in July: a new high-speed railway from Moscow to Kazan, improvements to the trans-Siberian line and a new ring road around Moscow. The long-anticipated 416-mile Moscow–St Petersburg M11 toll highway is scheduled to be completed by 2018. It will shorten journey times between Russia’s two largest cities from 12 hours to six or seven.

However, the contrast in how modernization is proceeding in the big cities and some of the less-developed regions is startling. “Just because reforms are coming at the national level doesn’t mean they are happening at the regional level—there is a strong need to promote local accountability,” says EBRD chief economist Erik Berglöf.

“The truth is that there remains huge regional diversity in terms of development, economic mix and reform orientation, but there have also been some remarkable success stories,” says the EBRD’s Plekhanov, pointing to Kaluga’s success in building an automotive cluster from scratch.

Russia’s best immediate hope for the future lies perhaps not in the regional development, but in the emergence of dynamic new companies in such sectors as IT, automotive and retailing: apolitical sectors without Soviet-era baggage. Such companies are typically started by entrepreneurs, grow organically and are well-managed, employing world-class technology and highly skilled workers.

Renaissance Capital’s Robertson says these present considerable opportunities for investors, as well as for Russia’s future. “Some of these stocks—­like food company Magnit, Bank St Petersburg and high-tech companies MTS, EPAM and Yandex—are among the most highly prized in the world, and their proliferation shows that Russia is increasingly being driven by a dynamic private sector,” he says.

Chris Osborne, US CEO of Sberbank CIB, formerly Troika Dialog, also argues that Russia’s potential remains huge. Pointing to a per capita average annual income of $16,000 and a population of 144 million, he emphasizes that in many ways this is now one of the world’s greatest unexploited markets. The financial sector, for example, remains relatively undeveloped, with retail products like mortgages and credit cards still in their infancy. But other sectors, too, have huge potential, especially in regions where development until now has been modest. “The big challenge is to develop infrastructure in the regions...everything from container transport to roads and railways must be modernized,” he says.

Although access to capital is hardly a problem—loans to companies increased 13% in 2012, though this was just a fraction of the rapid rise in loans to consumers—Russia’s banks clearly have a major role to play in supporting infrastructure development. So what does the future hold? The short term, with growth continuing sluggish, looks underwhelming—Capital Economics forecasts an oil price of $90 per barrel by end 2014. “This feeds into our expectations that the equity market and ruble will fall,” says its senior emerging-markets economist, Neil Shearing.

But over the longer term New Russia will assert itself, and the business environment will continue to improve. Progress will be slow, but steady, reflecting Russia’s size and diversity. 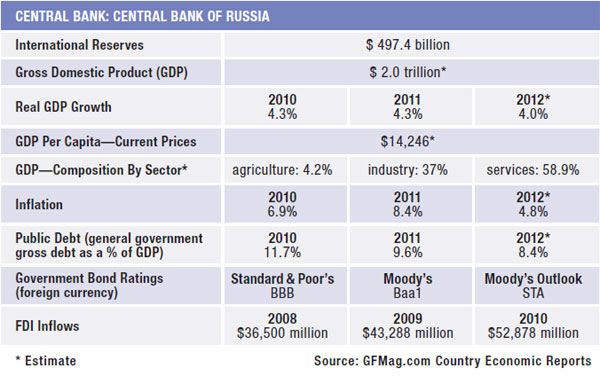