Bonds: The Sell-Off Is On

A rebound in global manufacturing, as well as rising confidence in the sector, is forcing bond yields higher, with emerging markets bonds feeling the brunt of the sell-off. However, analysts do not expect a repeat of the steep sell-off in bonds that occurred last summer after the Federal Reserve revealed it was considering cutting back on its bond purchases.

Jim McCormick, head of global asset allocation research at Barclays in London, says: “We expect the Fed’s policy withdrawal—likely to last several years—to usher in an environment of lower long-only returns, higher volatility and the need for more active management.” A long-only fund takes only long positions in what it believes are undervalued securities.

The risks for an early beginning of Fed tapering have risen with the recent improvement in US payrolls, and in the tone of the latest Federal Open Market Committee (FOMC) minutes, according to McCormick. “Now, the question is...how big the time gap should be between the start of tapering and a first rate hike,” he says.

The Fed’s policy accommodation since early 2009 created the unusual mix of a rising stock market and low and stable bond yields, McCormick says. “Now that the Fed has signaled a willingness to begin withdrawing this policy accommodation, the link between equities and fixed-income markets is beginning to revert to the more typical pattern,” he says. “As the US economy improves, equities rise, but so do bond yields.” 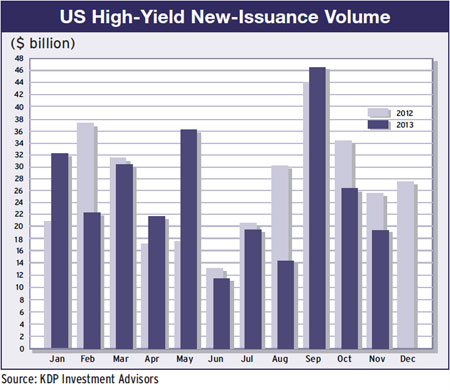 The Fed’s message that tapering its bond purchases is not the same as tightening is finally being embraced by the markets—which is very different to the initial market reaction last June to the Fed’s hint at tapering, McCormick says.

Once again, high-yielding emerging markets are responding negatively to rising US yields, despite the better news on global growth, McCormick says. Brazilian, South African and Turkish markets came under pressure late in 2013.

Jeffrey Meli, co-head of FICC (fixed income, currencies and commodities) research at Barclays in New York, says: “The advent of tapering and any associated rise in interest rates may again cause temporary bouts of volatility, but we do not foresee any major disruptions in the credit markets: Credit quality remains high; we forecast another year of low default rates; and the major (known) sources of potential systemic risk have largely faded. That said, valuations are already high and the potential for spread tightening [of corporates versus US Treasury securities] is limited in parts of the market.”

In Europe, Barclays expects the main source of superior performance to be driven by peripheral credits compressing versus those of the core countries. Meanwhile, global inflation is expected to be relatively tame.

Gary Herbert, portfolio manager for Brandywine Global, a global bond investor, says: “Based on our valuation models, both macro and micro, we believe that European high yield offers significant opportunity to generate an attractive return (income and capital appreciation) in higher-quality securities. Broadly speaking, one would expect global high yield to offer a reasonable level of return over the next 12 months, as reflation takes hold and the default rate continues to remain within historical bounds.” 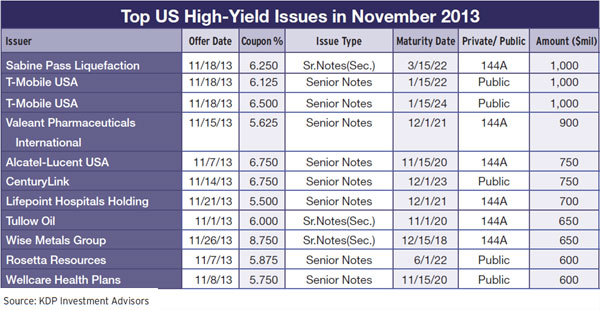