Despite the euro’s surprisingly strong showing in 2013, analysts expect the dollar to advance against most major currencies this year. The euro won’t be allowed to continue to appreciate, or it will harm Europe’s fragile economic recovery. Meanwhile, shorter-term interest rates could begin to rise in the US, also favoring the dollar.

Alan Ruskin, macro strategist at Deutsche Bank in New York, says: “There is a high probability that in the next two years, the dollar achieves something it has only managed in six years in the last 40 years—appreciate against all G10 currencies in a full calendar year. In contrast, the yen is now in danger of emulating the dollar’s post–Bretton Woods 2002–2004 record of being the weakest G10 currency for three consecutive years.”

As of early December, the dollar was up against six of nine G10 currencies for 2013, year-to-date. “Although this may feel like a Pyrrhic victory for dollar bulls, it is very rare for the dollar to be the best currency against all G10 currencies,” Ruskin says.

“This is possible in 2014, not least because Federal Reserve tightening expectations will start to become more actively priced into the front end [shorter maturities] in the second half. However, 2015 is the best chance for the next year when the dollar appreciates against all G10 currencies,” he adds. 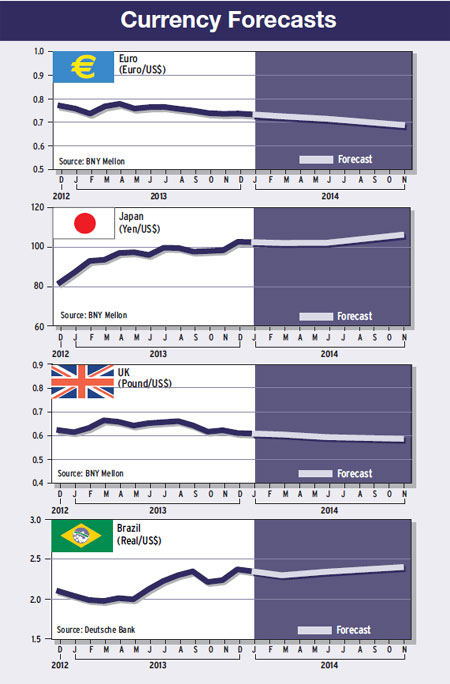 It seemed likely in early December that 2013 would go down as the first year in its 14-year history in which the euro would be the strongest G10 currency. “This was in no small part due to the momentum from capital flows that have gone into periphery equity and bond markets after the OMT [Outright Monetary Transactions] announcement,” Ruskin says.

In August 2012, the European Central Bank announced that it would buy sovereign bonds in secondary markets to keep yields down. “We anticipate that these ‘normalization’ flows will ease significantly in 2014,” Ruskin says.

The ECB cut the key interest rate it charges commercial banks for its regular loans to a record low 0.25% in November. The euro continued to rally, however, after ECB president Mario Draghi indicated last month that further stimulus was not imminent.

The lower-yielding currencies, such as the euro and the British pound, continued to outperform the dollar in early December. “The dollar’s strength is likely to be first concentrated versus higher-yielding currencies before moving on to the rest of the G10 as the Fed eventually exits its loose policy stance,” say analysts at Barclays. It remains to be seen how long the Fed can anchor the yield curve as economic data in the US improve, according to Barclays.

“So long as the short-term rate remains well anchored by the Fed’s forward guidance, the pace of the dollar’s appreciation may be rather modest in the near term,” Barclays says. “In the medium term, however, we see the risk of the market bringing forward its rate hike expectation closer to our baseline case (June 2015), as we expect the US economy to pick up momentum in 2014, to 2.4% from 1.7% in 2013, and labor market conditions to show steady improvement.”

Marc Chandler, global head of currency strategy at Brown Brothers Harriman, says Fed policy is not just about employment, which remains largely steady. “It is also about inflation, or better said, disinflation,” he says. Chandler notes that the Fed’s favorite measure of inflation (the deflator for core personal consumption expenditures) has fallen to its lowest level in 2.5 years.

Given the unprecedented jump in US inventories in the third quarter of 2013, when GDP rose 3.6%, most economists look for a slowdown in the fourth quarter back toward 2%, according to Chandler.