Despite its aim to become a world-class financial and commercial center, the Arab Gulf country remains dependent on oil for about 94% of its income. The government has proposed a four-year reform program to promote the private sector and reduce subsidies on fuel, electricity and water, while increasing charges for public services, many of which are free for Kuwaiti nationals.

A new law on foreign direct investment that will reduce approval times to 30 days came into force in December, creating a public authority to promote FDI, to be chaired by the minister of Commerce and Industry. The ministry began a one-year feasibility study last May on the creation of three economic zones on a total of 4,000 acres of land for local as well as foreign companies in light industry, logistics and other services industries. 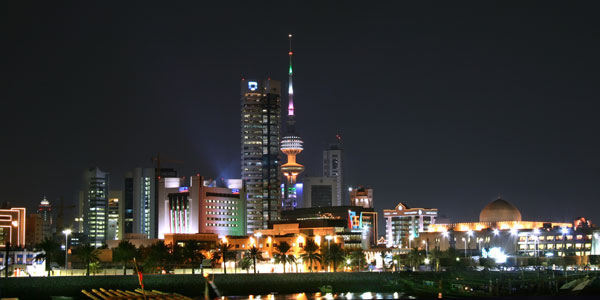 Before the December decision, Kuwait’s parliament, the elected National Assembly, had been deadlocked with the executive branch (run by the Al-Sabah dynasty) on moving ahead with the $110 billion four-year development plan, originally approved in 2010. “There have been some delays in implementing Kuwait’s development program, mainly due to the absence of broad-based performance indicators, insufficient accountability and the absence of a robust governance structure for the public entities which are responsible for execution of these projects,” says Manaf Alhajeri, CEO of Kuwait Financial Centre “Markaz.”

“Some of these projects are absolutely critical for the country, and any failure or delay in execution would result in losses,” Alhajeri says. “For instance, the Al-Zour power station is expected to add additional capacity as the country approaches zero reserve capacity in terms of electricity in 2014. A delay in this project would result in power cuts.”

A group led by France’s GDF Suez won a contract in February 2012 for the work on phase one of the Al-Zour North power and desalination plant. The contract faced opposition in Kuwait’s parliament due to an alleged failure to create a shareholding company to build the plant. The Kuwait Ministry of Electricity and Water announced in September 2012 that the plant would be delayed and would be ready in 2015.

A GDF Suez-led consortium that includes Japan’s Sumitomo and Kuwaiti partner Hamad Al Sagar and Brothers, won a new contract early this year to build the Al-Zour water desalination and power project, worth $2.5 billion. The Ministry of Electricity and Water will purchase the 1,500-megawatt plant’s output, including 100 million gallons of drinking water daily, under a 40-year agreement.

In a rundown on the status of current projects, Markaz says that an expansion of Kuwait International Airport is expected to be completed in 2016, the Al-Zour power projects (with phase one now under construction) in 2017, and Sabah Al-Salem University in 2018. A project to build Kuwait’s national rail network has been put on hold, but the Kuwait metro rail project could be completed in 2020, along with some housing projects. Markaz expects work to be completed this year on a deep-water navigation channel and berthing basin for a port development on Boubyan Island.

The vast majority of Kuwaitis work in the public sector, where salaries have doubled since the financial crisis. Expatriates hold most private-sector jobs, such as pumping gas and working in the service industries.

According to prime minister sheikh Jaber Mubarak Al-Hamad Al-Sabah, it is critical that Kuwaiti society shift from a consumer of the nation’s resources to become producers. In announcing the new development plan sent to parliament last October, he said: “Everyone must understand that the existing welfare state that Kuwaitis are used to cannot continue.”

Although the country’s fiscal position is strong, a sustained period of low oil prices could deplete surpluses that have continued for the past 14 years in a row, according to the executive board of the International Monetary Fund, which completed its Article IV consultation with Kuwait in November, 2013. “To contain risks, free up resources for increased capital spending, and to save for future generations, directors agreed that it will be important to restrain current expenditure growth, including the public-sector wage bill and generalized subsidies, and to enhance non-oil revenues,” the IMF said. It encouraged the Kuwaiti authorities to make further efforts to promote economic diversification, particularly in areas with potential for greater national employment.

The easing of tensions in the Middle East has contributed to recent declines in crude oil prices, according to a report by Aysha Adnan Al-Bahar and Daniel Kaye, economists at National Bank of Kuwait (NBK), which is cause for concern in the oil-revenue-dependent nation. “Negotiations between the West and Iran surrounding the latter’s nuclear program have reduced the political factors that have elevated oil prices this year,” the report says. “Western sanctions have taken an estimated one million barrels per day of Iranian crude off the oil market, and oil prices have reacted to the prospects of an easing of these sanctions.”

Oil supplies from countries that are not members of the Organization of Petroleum Exporting Countries are expected to rise significantly in 2014, according to NBK. This means that OPEC will need to make production cuts in order to balance the market and keep prices above $100 a barrel, NBK says. Non-OPEC supply growth has come from North America, Russia and the other states of the former Soviet Union, and Africa.

If oil prices average $104 per barrel, as expected, Kuwait could have a budget surplus in the fiscal year ending in March 2014 of about $45 billion, roughly the same as in the previous year, according to NBK.

The consistent surpluses are one reason Kuwait has done little to date to diversify its economy, since they have removed any sense of urgency. The IMF report urges Kuwaiti authorities to restrain public spending, accelerate structural reforms and put the development plan back on track. The IMF said Kuwait should develop new income sources to protect it against the risks of a decline in oil prices. It suggested extending the 15% corporate tax on foreign-owned companies to all companies, as well as cutting and targeting consumer subsidies to reduce the non-oil deficit gradually.

The independence of the Central Bank of Kuwait (CBK) should be strengthened, the IMF added. “The CBK should be provided with an enhanced mandate for institutional and functional autonomy, balanced by strengthened governance and accountability,” it said. Kuwait’s investment companies continue to be vulnerable to swings in financial and real estate markets, the IMF said. It recommended a thorough review of the sector, including its role in the economy and its financial viability.

“Strong fiscal frameworks will be needed to guide public spending in the medium term,” the IMF directors said in a statement. “In this context, strengthening the macro-fiscal unit would support the development of a medium-term budget framework and greater efficiency of public spending.” They cautioned that the recent large consumer debt-relief program could give rise to moral hazard.

Markaz CEO Alhajeri says, “Kuwait’s economy has suffered due to the weak governance structure of public entities, bureaucracy and delays in implementation of key infrastructure projects and reforms.” He said a number of steps have been taken to improve the investment climate. For example, the Central Bank of Kuwait has released several corporate governance codes, which are to be implemented by Kuwait companies this year and which will help boost transparency.

“Better project opportunities and an improved investment environment for the private sector will accelerate the creation of jobs,” Alhajeri says. “Policy support for innovation and entrepreneurship is also key for the development of the private sector.” He notes that Kuwait’s investment/GDP ratio for 2007–2012 was the lowest among the Gulf Cooperation Council (GCC) countries at 18%, compared to 28% for Saudi Arabia.

Over the medium term, non-oil GDP growth is projected to pick up to about 5%, as large infrastructure projects are expected to promote the growth momentum, according to the IMF. However, if the development program continues to stall, the dancing colored lights on the outside of most tall buildings in Kuwait City could go dark one night soon.

Kuwait, one of the world’s richest countries per capita, is investing a large share of its oil revenues abroad to provide for future generations. The assets managed by sovereign wealth fund, the Kuwait Investment Authority (KIA), have increased from an estimated $260 billion in 2008 to more than $400 billion today, making it one of the world’s largest sovereign wealth funds. 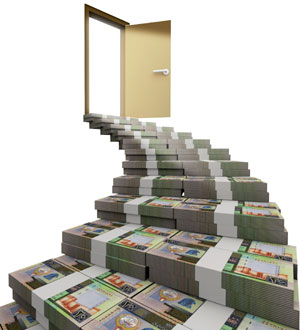 Nearly half of the total is invested in stocks, with the rest mainly in real estate and infrastructure assets in Europe, the United States and, increasingly, Asia.

Closer to home, Kuwaiti investors are actively involved with the rebuilding of Iraq. The two countries have resumed direct flights and are collaborating on energy projects. Kuwait is investing Gulf War reparations in southern provinces of Iraq, mainly Basra. Kuwaiti-owned financial institutions are among the biggest in the neighboring country.

“In these troubled and difficult times, we are a responsible and long-term institutional investor, of which there is a real global scarcity at a time when they are most needed,” noted Bader Al-Sa’ad, managing director of the KIA. “Even during the financial crises of recent years, we never ceased to invest.”

Al-Sa’ad was speaking in London last June on the occasion of the 60 th anniversary of the Kuwait Investment Office, the KIA’s first overseas subsidiary. The KIA does not officially disclose its assets under management, but Al-Sa’ad revealed that the London-based KIO alone managed more than $120 billion globally, up from $27 billion 10 years earlier. Alongside its real estate subsidiary, the KIA is setting up an infrastructure fund, which it is operating from London.

During the financial crisis, the KIA made a $3 billion investment in Citi, which it sold two years later for $4.1 billion, for a 37% return. It also invested $2 billion in Merrill Lynch, which was later taken over by Bank of America. In October 2013, the KIA hired two former Bank of America Merrill Lynch bankers to run its London infrastructure unit. Earlier last year, the KIA acquired Bank of America’s European headquarters for $600 million.

In the US, the KIA is an investor in the $15 billion Hudson Yards office project in Manhattan. It also acquired a building in Washington last year for $294 million. The KIA opened a representative office in Beijing in October 2011, as a gateway for its growing investments in Asia. The Chinese government has granted the KIA a $1 billion investment quota, the highest of any foreign investor. 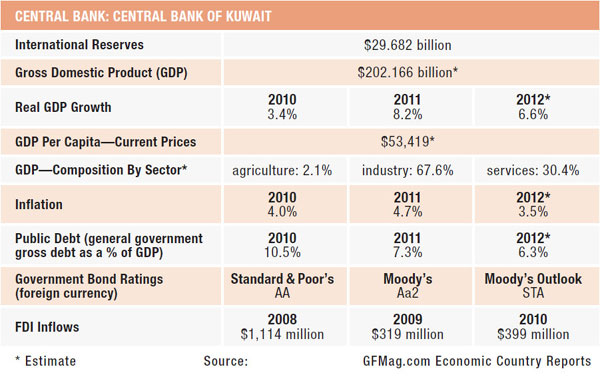