What’s Next For Kuwaiti Banks?

The IMF’s latest Article IV report on Kuwait, concluded at the end of November, found that Kuwait’s banking system is “well regulated and resilient to shocks.” Earlier this year, Moody’s confirmed its stable outlook on the system, and in early December, Fitch upgraded three of the smaller Kuwaiti banks to A+ on the basis that the Kuwaiti government would use its substantial financial resources to rescue any local bank that runs into difficulties, regardless of its market share.

It is against this backdrop that analysts are assessing the significance of the recent acceleration in credit growth. Last October, bank credit rose faster than at any time during the past five years, according to National Bank of Kuwait (NBK). Year-on-year, bank lending increased by 7.8% to the end of October 2013—that’s about twice the rate of non-oil GDP growth.

Most of the increase in lending is directed to the nonfinancial sector, reflecting the start of some long-delayed local projects, but it is the rapid acceleration of personal credit that is attracting attention. Balances of consumer and installment loans rose by 16.3% in the year to October 2013, according to the Central Bank of Kuwait’s figures. Real estate lending, which had been subdued, increased by nearly 5% between the end of the summer and the end of October.

Household credit has been a controversial issue in Kuwait for decades. Credit for personal expenditure, housing or even financial speculation periodically reaches dangerous and unsustainable levels, and the Kuwaiti government regularly steps in to ease the burden on its citizens in what is seen as a natural extension of the government’s ongoing and comprehensive welfare program. 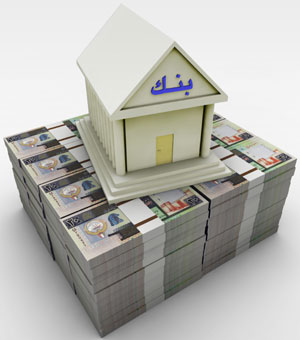 Significant amounts of household credit were written off, largely at government expense, following a stock market crash in the 1980s, and again, following the occupation of Kuwait by Iraq, and its subsequent liberation in 1991. Further write-offs were legislated in 2010. Most recently, the Kuwaiti parliament voted in April last year to write off many consumer loans contracted before 2008, and in some cases to force banks to repay some of the interest they had received.

The Central Bank of Kuwait appears alert to the dangers of household credit growth. In November it issued new regulations to govern the extension of credit for private housing. The regulations require banks to verify that funds disbursed will actually be used for the purpose intended and to ensure that interest and principal repayments will be affordable. More specifically, they set maximum loan-to-value levels for different types of loans.

Yet the limited breadth of the Kuwaiti economy means that constant vigilance will be required. Economic output is dominated by oil and gas, and beyond that economic activity focuses on imports and construction. When oil prices are buoyant, excess liquidity finds few outlets apart from real estate, consumption and financial speculation. As Kuwait is already very wealthy, high oil prices present more challenges for the financial sector than they do opportunities.

A new Central Bank governor is overseeing these issues—the deputy governor, Mohammed Al-Hashel, was promoted to the governorship in February this year following the resignation of sheikh Salem Abdulaziz Al-Sabah, who had held the post since 1987.

In addition to the immediate challenges of monitoring credit growth, the new governor will face longer-term tasks. Many of the country’s 92 “investment companies” still need attention after bingeing on property investment in the years before the global financial crisis. All are regulated by the Central Bank. Some have already been put into liquidation or merged.

The new governor must also consider whether 10 full-scale commercial banks can generate healthy profits year-after-year in such a limited market, especially when they also face competition from branches of 11 foreign banks. Kuwait boasts some of the strongest banks in the Middle East—National Bank of Kuwait and Kuwait Finance House stand out—but it is also one of the region’s most heavily banked markets. Saudi Arabia, with an economy three times the size of Kuwait’s, makes do with just 12 locally incorporated banks.