As equities set off on their stealth rally this spring, secondary stock offerings and convertibles were finding new friends among investors. 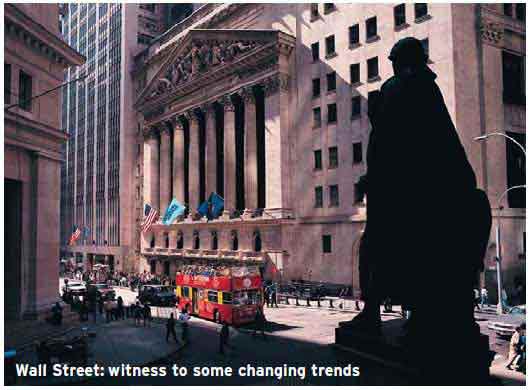 Gobal equity capital markets may be in their worst state in decades, but bankers can still always find cause for modest celebration. Though the IPO market is still largely closed to issuers, secondary stock offerings and convertible issuance are bearing up passably to the poor economic backdrop; in fact, new records are being set. At the end of June,for instance,General Motors issued a $3.5 billion convertible bond as part of a record US bond issue totaling $16.9 billion, making the highest-volume quarter of convertible issuance in history.

GM’s issue, done largely to patch up a hole in the company’s pension plan, is part of a scenario where more money is being made by selling securities linked to stock than by the sale of shares themselves. With currently low interest rates, companies are finding it easier to issue convertibles than woo investors into buying stock in what is still a volatile market. So whereas in 2002 convertible offerings accounted for 41% of proceeds raised by US issuers, this year 67% of raised funds have been through convertible bonds.

“The last several weeks have been some of the busiest in the history of the convertibles market in terms of deal numbers, and you’ve seen a perfect opportunity for convertible issuers,” says Tyler Dickson, co-head of US equities at Citigroup.“In fact, one of the trends we’re seeing is even for companies that have less-than-perfect capital structures to come out with these convertible offerings with the confidence that they’ll get that liquidity.” 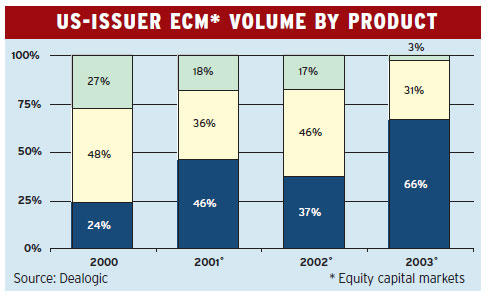 What has sometimes been seen as a loan market of last resort has recently become the market of choice for the bluest of blue chips, with companies such as energy industry giant Schlumberger, financial services provider Wells Fargo and German technology manufacturer Siemens all tapping the market. Similarly, buy-side in

terest extends to small firms that might previously not have attracted investors keen to go for large names as a defensive play.


Companies are able to access the market on favorable terms in the low-interest-rate environment, some with no yields and generally with high conversion premiums. These premiums [the percentage rise of stock price at which the bonds can be converted] can be anywhere between 50% and 100%, put against a traditional market average of around 30%.“The shares underlying the convertibles are inherently less dilutive when the conversion premiums are higher,” says Dickson,“and so the impact of executing these deals is lower.”


The attractiveness of convertibles for issuers is matched by keen appetite from investors. Interest rate movements have encouraged hedge fund interest in the instruments, and their popularity has increased on the back of robust activity in high-yield bond markets.


Technology information provider CNET Networks, however, shelved its plans mid-June to issue $100 million of convertible bonds, claiming that the terms were not attractive enough in the light of already having sig

nificant operating capital. Other companies, including software firm Doubleclick and Amylin Pharmaceuticals, had their deals repriced.

Frequently going hand-in-hand with convertibles issuance, follow-on stock offerings have fared worse than convertibles, and although the performance by the middle of June has been lackluster—140 companies in the US had raised $22.6 billion, according to Thomson Financial, whereas total offerings in 2000 amounted to over $100 billion—it is not all doom and gloom.


Follow-ons have trended toward swift placement arrangements, and whereas last year around a third of marketed deals were marketed in less than 24 hours, the first half of 2003 saw nearly twice that percentage done in the same time. But fuller roadshows are returning— an indication of a healthier market. Previously, buyers were more risk-oriented and issuers could be averse to doing roadshows for fear that stocks would move lower. “Now, whilst there’s still a trend for an accelerated format,” says Dickson, “we’re seeing issuers interested in slightly longer roadshows and managers coming out to tell a positive story.”


Secondary issues can cause discomfort, of course, for existing shareholders, as for instance with New Jerseybased property and casualty insurance group Chubb, which sold shares in June to raise equity to appease credit agencies concerned over asbestos payout liabilities and money set aside for director and officer insurance policies. The company sold $1.2 billion of stock and convertibles, offering around 30 million shares, or nearly 18% of the total float.


Follow-on issues attracted flak in the wake of reports that at the height of the dot-com frenzy they were used as a tool to generate corporate insider profit. IPOs, according to some critics, could be arranged to deliver astronomical share price rises; then, on high stock prices, a secondary issue could raise far more money, the upside going to initial investors and founders.

Now the reality is more mundane. Brick and mortar companies are doing rights issues to fill up the coffers to allow for expansion—or simply to fund their routine business. For want of a dynamic IPO market or confidence more generally in the equities markets, this modest continuation is, however, something for which market participants can be thankful.