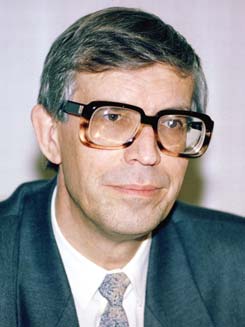 The endgame in the battle between former Yukos Oil Company CEO Mikhail Khodorkovsky and President Vladimir Putin appears to be near. Khodorkovsky’s trial on charges of fraud and tax evasion was slated to start— after several delays—in late June. Putin shocked markets— and sent the Yukos share price spiraling upward—when he commented that the Russian government is “not interested in bankrupting a company like Yukos”—with optimists gleaning that a deal was imminent.Yukos had warned it had insufficient cash to meet the anticipated $3.4 billion in back taxes and penalties the government has indicated it will levy. As Global Finance went to press, it appeared that the company would be forced to pay the back taxes.

Investors were further shaken up as Sodbiznesbank, a well-connected medium-size institution, had its license revoked on suspicion of money laundering.Another bank, CreditTrust, closed its doors as well. Fearing systemic instability, Russia’s banks closed credit lines to each other, and interbank lending rates soared. The Central Bank of Russia, headed by Sergei Ignatyev, attempted to restore calm by cutting the refinancing rate and lowering reserve requirements.

On the back of recurring and stubborn concerns about the investment environment, and despite strength in the oil price that works in the favor of Russia’s oil producers, Russia’s equity market wilted by more than 30% within weeks to give up all of its 2004 gains. It wasn’t all bad news, though: Mercer Human Resource Consulting found that Moscow is down one notch from last year in Mercer’s rating of most expensive cities for expatriates to live in;Tokyo and London are in first and second place.