The US dollar appears ready to resume its longterm declining trend, as net foreign purchases of US assets are slowing, analysts say.

Higher interest rates are not likely to support the dollar, because the Federal Reserve has fallen behind the curve in fighting inflation, says Samarjit Shankar, director of global strategy at Mellon Foreign Exchange, the global foreign exchange group of Pittsburgh-based Mellon Financial.

“Pipeline inflation pressures are building, and the question is how long it will take the Fed to catch up,” says Shankar, who joined Mellon in May from JPMorgan Chase, where he was global FX strategist.

US companies face the potential erosion of profit margins as it becomes more difficult for them to pass on price increases to consumers, Shankar says.

This could result in a downturn in the US stock market’s prospects at a time when the US still needs capital inflows to fund the record current-account deficit, he says.

According to Shankar, there are better opportunities for global investors in Japan, where a broad-based recovery is unfolding, and elsewhere in Asia.

Few analysts are mentioning the US currentaccount deficit when explaining why the dollar is lower, says David Gilmore, partner and economist at Essex, Connecticut-based Foreign Exchange Analytics. But it just may be that the collective pool of world savers has had enough of US assets and is less eager to load up on more, Gilmore says.

“The market is ready to sell dollars, and it is selling them with less-thanspectacular fundamental stories in Europe and Japan,” he says.

“The simple truth is that less new capital is being committed to US assets, and this suggests a gradual dollar decline and higher US market rates in coming months, according to Gilmore.

Higher oil prices usually correlate positively with a weaker dollar and a widening of the US trade deficit, says Michael Rosenberg, global head of foreign exchange research at Deutsche Bank in New York.

“The odds strongly favor that the US trade numbers will get uglier,” he says.

The dollar is currently about 5% to 10% undervalued but is still within a normal range around fair value, Rosenberg says.

“Our trade models indicate that a downside overshoot in the dollar’s value on the order of 20% to 25% will be necessary to help restore the US currentaccount deficit to a sustainable level,” he says.

Analysts point to good foreign investor interest in recent European bond auctions as one reason for the euro’s recent gains.

While economic data remain mixed, there are signs that the region’s economy is perking up.

The euro-area export rebound and a workforce adjustment in manufacturing finally are boosting profit margins in Europe in line with a typical recovery, says José Luis Alzola, economist at Citigroup in London.

Nonetheless, moderately improving spending plans and rising capital goods orders appear to be pointing to a gradual rebound in capital outlays, he says.

Euro-area manufacturing employment is nearly 4.5% below its 2001 peak, while wage growth is slowing appreciably.The profit rebound appears to be broad-based but is particularly intense in the construction sector, Alzola says.

This suggests that a summer rate increase could be in the cards, Laidi says.

Trichet says the ECB is keeping its options open.

Meanwhile, the British pound has been the strongest major currency against the dollar this year amid expectations that the Bank of England will have to keep raising rates to cool down an overheated UK housing market. 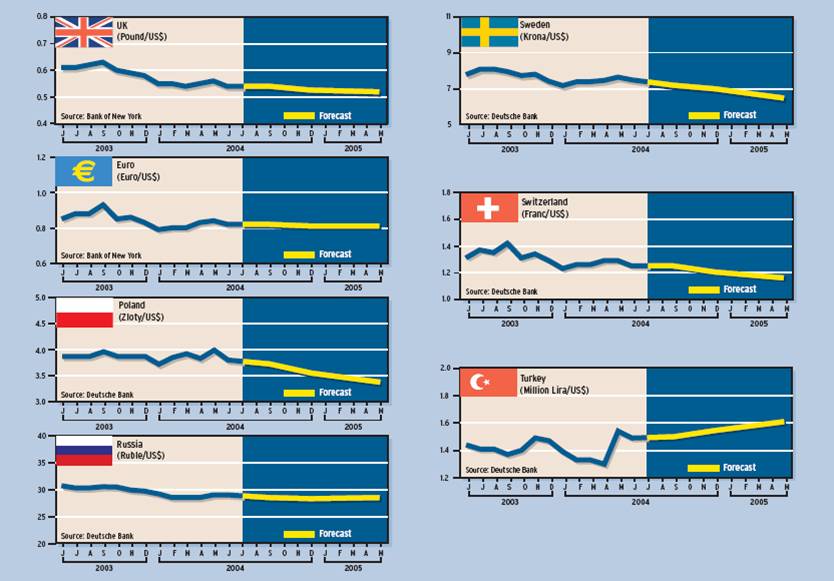 Zhou Xiaochuan, governor of the People’s Bank of China, told senior officials at the regional branches of the central bank in June to step up their monitoring of inflation.

This raised expectations that the central bank was moving closer to raising interest rates, analysts say.

Xiaochuan warned that rising consumer prices would lower real interest rates and could encourage stockpiling unless rates kept pace with inflation.A buildup of inventories would lead to shortages of raw materials and increase the problems of bottlenecks in the system, he said.

China also announced it would require foreign banks to apply for an annual quota of money that could be brought into the country.

“The quotas would help limit capital inflows in an effort to limit speculation the yuan would be revalued,” says Clyde Wardle, emerging markets currency analyst at HSBC Bank (USA) in New York.

Wardle says that HSBC expects the Chinese central bank to raise interest rates by a half point in the very near future in light of a pick-up in inflation.

Meanwhile, officials at the State Administration for Foreign Exchange say they plan to further develop and improve the foreign exchange market by expanding the forward trading of the yuan. The market in non-deliverable forwards, or NDFs, is based offshore and settles in US dollars.

Analysts at Brown Brothers Harriman in New York note that the premium forward positions in the yuan narrowed in early June.

The forward rate reflects interest-rate expectations as well as currency expectations. When the gap between US and Chinese rates is expected to narrow, the premium shrinks.

According to Brown Brothers, the yuan forwards have been trading more on Chinese specifics lately and less on broad USdollar views.

The Chicago Mercantile Exchange has agreed to provide China development advice on foreign exchange instruments. US treasury secretary John Snow says the agreement shows that China is serious about moving toward a more flexible currency regime.