Numerous companies with below investment-grade ratings have canceled or delayed proposed debt sales in recent weeks, as borrowing costs have increased.

Other issuers, in the US as well as in Europe, have been forced to offer more-attractive terms to suddenly skittish investors who are worried about rising interest rates.

New York-based cosmetics maker Revlon and Denverbased luggage maker Samsonite were among the dozens of companies around the world to cancel or postpone debt offerings in the face of deteriorating market conditions.

Earlier this year, companies were able to place record amounts of high-yield bonds, as investors reached for higher returns than those available on low-yielding government securities.

Only $6.5 billion of new US high-yield bond issues came to market in May, down from $12.7 billion in April, according to Vermont-based KDP Investment Advisers.

Meanwhile, some hedge funds have been selling high-yield holdings in order to cover recent losses in emerging markets.

“The gradual fall in oil prices is raising optimism on economic growth and on the probability that central banks will raise rates, thus pushing bond prices down in line with oil prices,” Loeys says.

The high-yield market is in the midst of a tug of war between low supply and good credit fundamentals on one side and the fear of another oil spike and rate rises on the other side, Loeys says.

UGS PLM Solutions, a Texas-based specialist software provider spun off by EDS, was forced to increase the yield on a $550 million issue of senior subordinated notes to 10% from an originally planned 9.5%, as market conditions worsened.

The company also canceled a euro-denominated tranche but managed to raise the full $550 million it was seeking in dollardenominated notes due in 2012.

Proceeds from the sale will help finance the $2.05 billion purchase of UGS PLM by BSW Holdings, an affiliate of buyout firms Bain Capital, Silver Lake Partners and Warburg Pincus.

UGS PLM offers technology and services that support the entire lifecycle of a product, from concept to delivery. 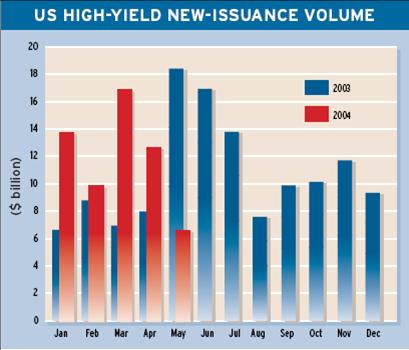 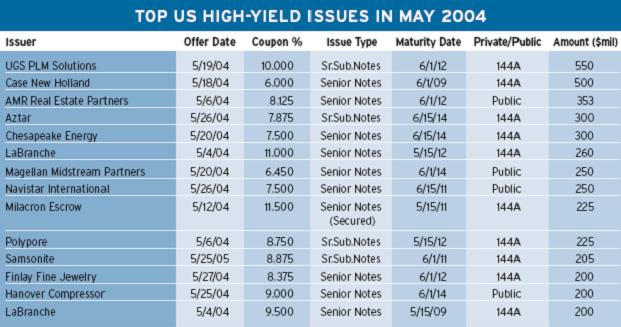