The hedge funds industry is growing rapidly, attracting both new investors and companies looking to service this dynamic market.

As investments into hedge funds reach record levels of around $1 trillion worldwide, interest is growing in providing services to the rapidly expanding funds. Now, even investment banks are looking for a piece of the action, providing hedge funds with investment advice and offering their own hedge funds to investors, usually as funds of hedge funds.

Much of the new money flooding into hedge funds is coming from institutions, including public and private pension funds. US institutional investments into hedge funds total between $60 billion and $70 billion and will increase to at least $300 billion before they level off in five years or so, says Christopher J. Acito, principal at Casey, Quirk and Acito, a Darien, Connecticut- based management consultant to investment management firms.

Hedge fund investments by some endowments and foundations already have passed 40% of their assets, Acito says, and these investors may have reached their target allocations. But pensions and insurers have a much smaller proportion of their assets in hedge funds and will be increasing that percentage steadily in the years ahead, according to Acito. “Institutions have discovered that returns that are not correlated with the broad market can tone down volatility in their portfolios,” he says.

As institutional investors begin to appreciate the value of diversifying their portfolios with investments in vehicles that feature absolute-return strategies, mainstream fund-service providers have begun buying up specialist fund administrators to offer tailored services to hedge funds. The trend started in July 2002, when Boston-based State Street purchased International Fund Services, a provider of accounting and administration as well as tradesupport and middleoffice services. That same year, Bank of New York acquired International Fund Administration, a Bermuda-based alternative investment fund administrator. 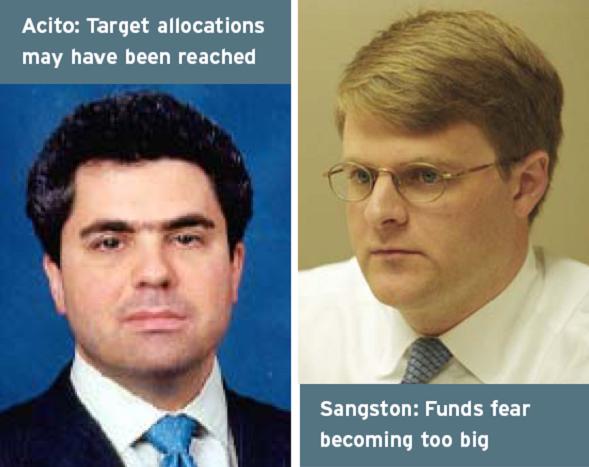 In addition to expanding its core servicing capabilities, State Street’s strategy was to build its presence in alternative investments by leveraging its strengths in securities finance. “Hedge funds were starting to appeal to Main Street,” says Gary Enos, executive vice president and head of State Street’s alternative investment services group.“IFS was servicing $35 billion of hedge fund assets at the time, and we now have $100 billion being serviced,” Enos says. “There is no retail hedge fund yet, but we are hearing the drumbeat,” he adds.

State Street’s investment management arm, State Street Global Advisors, has approximately $700 million of hedge fund assets under management. It has created a dedicated Hedge Fund Strategies Group based in London to capitalize on the increasing market demand for alternative investments.


The Bank of New York acquired International Fund Administration in October 2002. “The IFA acquisition, which closed in February 2003, gave us a client base, as well as technology and a management team,” says Brian Ruane, executive vice president and hedge fund services manager at Bank of New York, which now has $38 billion of hedge fund assets under management. He says the bank has no plans to offer investment advice to hedge funds.

BNY Alternative Investment Services has a wider product offering than competing service providers, as well as proprietary technology, Ruane explains. “We saw alternative investments as a growth area because of the growth of hedge funds as an asset class, as well as the fact that the existing institutional customer base was increasing,” he says. 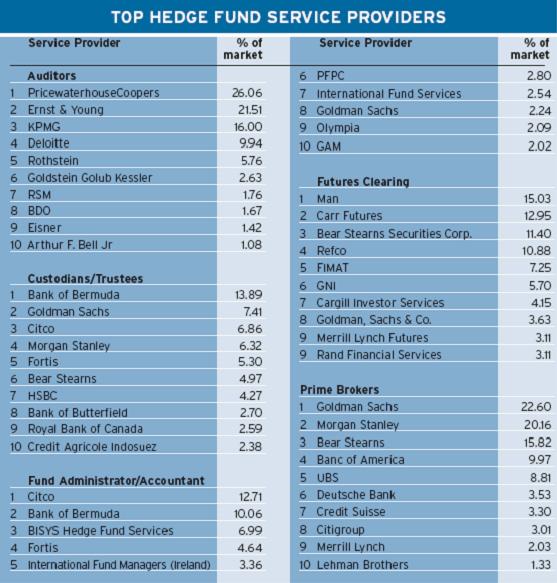 Jeff Bieselin, senior vice president at The Bank of New York, says it is unclear at this point whether the hedge funds industry will come under increasing regulation. “Service providers like us are positioned to benefit if there is Many investment banks see prime brokerage as a gateway to a full range of products and services offered by their firm to hedge fund clients. Demand for prime brokerage services has been growing as the number of potential hedge fund clients soars and individual funds use more prime brokers, according to a study by Connecticut-based Greenwich Associates. Nearly 30% of the 36 hedge funds in the Greenwich survey, which was conducted in March 2004, said that they have increased the number of prime brokers used in the past 12 months, and a similar percentage plan to add to their prime-brokerage rosters in the next year.regulation,” he says. “It won’t be negative for our business.We can help firms adhere to compliance,” he adds. Through its offshore fund service center subsidiaries in Ireland, Luxembourg, the Cayman Islands and the Channel Islands, Bank of New York is licensed to provide fund administration services including global custody, portfolio and company administration and transfer agency services.


There are three main reasons why hedge funds use multiple prime brokers, says Richard P. Del Bello, managing director and head of equity finance, the Americas, at UBS Investment Bank in New York.“First, the funds want to have the ability to do additional stock borrowing,” Del Bello says. “Second, they want to do benchmark pricing to see how much they are being charged by different brokers. And third, they want to have access to additional capitalintroduction services,” he says.

UBS does not charge for capitalintroduction, which Del Bello characterizes as a dating service. “We don’t even check to see how it works out,” he says. These services are designed to introduce hedge-fund advisers to potential hedge-fund investors.

A problem for some hedge funds is that there is too much money seeking to be invested, Del Bello says. “If the fund becomes too big, it is more difficult to attain the desired rate of return,” he says. 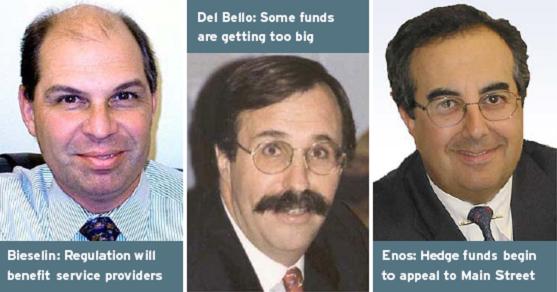 One strategy that works better in a small format is Pipes, or private investment in public entities, says Richard M.F. Ernesti, director and global head of alternative investments at Citigroup Global Transactions Services. Pipes involve investments by a private equity fund in a publicly traded company, usually at a discount. Public companies use Pipes to raise capital quickly for expansion and to avoid the expense of a public offering.

As long as hedge funds deliver returns that exceed those in other investments, the industry will continue to grow, Ernesti says. In recent quarters, however, hedge fund returns have been flat to negative on average, and some are beginning to wonder if the hedge funds’ managers are losing their touch.“Industry participants are very bullish about growth,” Ernesti says. “The question is whether the industry can support the growth.” 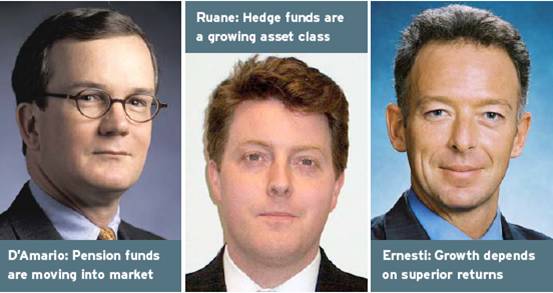 As hedge funds have caught on in Europe and Asia, prime brokers have introduced global platforms to service the business. Citigroup purchased Forum Financial in November 2003 to serve fund managers worldwide. The acquisition included operations in Portland, Maine, as well as in Poland and Bermuda. Citigroup is also planning to extend the availability of hedge fund investment techniques to a retail audience. “We are working on a registered hedge fund that would be available to the retail market with a minimum investment of about $25,000,” Ernesti says.

Additional inflows of hundreds of billions of dollars would strain the capacity of the hedge fund industry, even in light of recent fund proliferation, say the consultants at Greenwich Associates.

“In many cases, hedge funds don’t have to solicit business today; they can market by picking up the phone when it rings,” says Greenwich Associates consultant Tim Sangston.“Some well-established hedge funds are turning people away for fear of becoming too big and losing the ability to chase opportunities for fear of moving markets,” he says.

Pension funds of corporate and public workers are now moving money into the market, says Peter B. D’Amario, another consultant at Greenwich Associates. “Right or wrong from an investments point of view, there’s a degree of political sensitivity arising because they are investing pension-fund assets,” D’Amario says. “There’s a growing perception that the money flowing into hedge funds today is not just coming from wealthy individuals and endowments who can absorb a hit if things go awry,” he says.