The challenges may be huge, but a handful of southern African nations are getting a boost in their efforts to fight poverty and improve their economic fortunes. 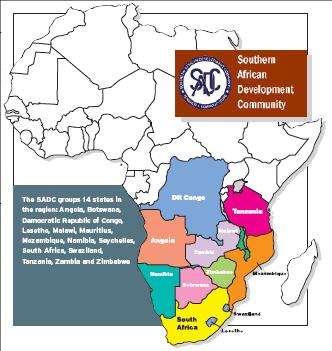 Early in June, on a steamy afternoon on Sea Island off the coast of Georgia, leaders from some of the world’s wealthiest nations met representatives of some of the poorest at the G8 summit. African leaders from Algeria, Ghana, Nigeria, Senegal, South Africa and Uganda met President George Bush, Prime Minister Tony Blair and the leaders of Canada, Italy, Russia, France, Japan and the European Union to discuss the many challenges facing the African continent.

On the agenda were key topics including combating poverty and dealing with Africa’s debts, tackling HIV and AIDS and increasing food security. These challenges are nothing new, particularly for the poorest African nations, many of which are part of the Southern African Development Community (SADC). Created as the Southern African Development Coordination Conference (SADCC) in 1980 by nine founding members, the SADC now groups 14 states in the region: Angola, Botswana, Democratic Republic of Congo,Lesotho, Malawi, Mauritius, Mozambique, Namibia, Seychelles, South Africa,Swaziland, Tanzania,Zambia and Zimbabwe. Its primary objectives include achieving development and economic growth in the region, alleviating poverty, enhancing the standard and quality of life of the people of southern Africa, promoting peace and security and encouraging the interdependence of member states.

Even the most optimistic observers agree that the SADC is facing a tremendous challenge. Among its 14 member states, about 14 million people are infected with HIV or AIDS, while more than 15 million face starvation.There are huge disparities of wealth and economic prospects within the group, and many nations are considered unstable at best. Seven SADC countries—Angola, the Democratic Republic of Congo, Lesotho, Malawi, Mozambique, Tanzania and Zambia—are classified by the United Nations as “least-developed” economies.

Despite the scale of the challenge, the SADC is confident it can effect real and positive change.Taking a leaf out of Europe’s book, it is trying to create an economic community and a common market along the lines of the European Union. In its favor, the region has a population of nearly 200 million and a combined GDP of around $196 billion. But by far the majority of that GDP is generated in South Africa, which has the strongest economy in the region, with 71% of SADC’s GDP, but only a fifth of its population.

The SADC’s predecessor, SADCC, worked hard to redress that balance and to help its members become less dependent on South Africa, which at the time was still under apartheid. Gabriel Oosthuizen, associate fellow of the Royal Institute for International Affairs, explains, “Most of the countries were utterly dependent on South Africa economically, and they realized that they needed to change that.” When the SADCC was established in 1980, 80% of the goods for international export by the six landlocked SADCC member states—Malawi, Zambia, Zimbabwe, Swaziland, Lesotho and Botswana—were directed through South African ports.The SADCC undertook a number of infrastructure projects including the upgrading of the Beira Port Transport System and the Beira Corridor in Mozambique. The efforts bore fruit, and after 10 years of the SADCC’s deliberate efforts to change the situation, 80% of the region’s traffic had been diverted away from South African ports.

T he “conference” became a “community” when the SADC was created on August 17, 1992.The aim was to give the organization a more formal status and to change its focus from the coordination of development projects to the more complex task of integrating the economies of member states.

From the very beginning the SADC placed particular emphasis on member states formulating and implementing policy decisions. But by the mid-1990s it was becoming clear it was experiencing major difficulties. In 2001 it was agreed to re-structure and adopt a more centralized approach.

A report on the restructuring of the SADC by the Christian Michelsen Institute in Norway says: “It was felt that the SADC Secretariat lacked the power, authority and resources required to facilitate regional integration. The sector-coordinating units in member states were highly uneven in their ability to pursue and implement policies. It was also argued that SADC’s work plan lacked a clear regional focus, it covered too many areas, and the majority of projects were found to be mainly national.”

On March 12 of this year, the SADC launched a landmark initiative that should help its member nations focus on the most important issues they are facing: poverty and economic development.The Regional Indicative Strategic Development Plan (see box on page 53) is geared to meeting the United Nation’s Millennium Development Goal of halving the number of people living in poverty in the region by 2015. To do this, the region needs to reach an annual economic growth rate of at least 7%. Among the majority of the SADC’s members, that growth rate might well be simply unachievable.According to SADC, economic growth in the region—including South Africa—is projected to run at just above 3% in both 2003 and 2004. Achieving a higher rate of growth will require higher levels of domestic savings, foreign direct investment and external development assistance.

Racking up that level of growth might be possible if the all the nations in the region were able to work together effectively. That might not happen any time soon, though.A report published by Gina van Schalkwyk of the South African Institute of International Affairs says that countries in SADC are unlikely to achieve the EU’s cohesiveness in the short term due to the enormous disparities between countries like South Africa on one hand and Angola and the Democratic Republic of Congo on the other.

Oosthuizen, who is writing a book about the SADC, agrees. “How do you meaningfully integrate a region like SADC if you have an economy like South Africa that dwarfs the other economies in the region?” he asks. Despite this, Oosthuizen believes South Africa’s membership in SADC is a positive thing.Peter Draper, trade research fellow at the South African Institute of International Affairs, concurs.“South Africa has a critical role to play,” he says.“If you look at foreign direct investment flows into the region, South Africa is the main destination,” he adds.

It is understandable that investors should feel most comfortable putting their money into South Africa, but even that country could benefit, Oosthuizen believes, if a more regional approach were adopted for attracting FDI.“There should be a coordinated approach, and South Africa should actively encourage investors to invest elsewhere in the region,” he says. “At a regional level they should also decide on regional priority areas for invest-ment,” he adds. FDI is far more likely to flow into South Africa if its neighbors were seen to be attracting investment and working to stabilize and grow their economies (see box on page 52).

Unfortunately, the SADC also has some strategic challenges to contend with from organizations such as the Common Market for Eastern and Southern Africa (Comesa) and the Southern African Customs Union (SACU), says Draper, who points out that there is significant overlap between the organizations.All five SACU members are members of SADC, and eight SADC members are also members of Comesa. SACU is already in negotiations toward a free-trade agreement with the US, and Comesa is currently in the process of setting up its own customs union.There has also been talk of SACU expanding, with Mozambique and other SADC countries considering joining, says Oosthuizen. “The overlap in some instances of some trade integration and regional economic schemes is a big problem,” he adds.

The political instability of the region is another hurdle to its economic growth.

But despite its continuing challenges, SADC has made many achievements. “The region has a lot of problems,”admits Oosthuizen, “but it doesn’t follow that these are insurmountable.

“SADC’s very ambitious trade and economic integration goals will probably not be realized in the foreseeable future. But it doesn’t mean that important steps won’t be taken to meaningfully increase trade and economic cooperation in the region,”Oosthuizen adds.